Indian cricketers command massive following everywhere, be it in the mainstream media or their social media presence. Frankly, they are lorded with a demigod status. In their hands, rests the power to influence decisions and impact matters when needed.

But have you noted what’s happening right now in this new wave of COVID?

Unfortunately, the Indian cricketers are hesitant to address such insurgencies within the country. While surely, one should have and did step up for much-needed global issues, social epidemics such as BLM (Black Lives Matter movement), but what about matters that are so intrinsic to the country?

Here is what’s critical in India at this point in time.

Thus far, India has registered, on the whole, 18 million cases. Of these, there’ve been no fewer than 201,000 deaths. In states like Karnataka, Tamil Nadu, and Uttar Pradesh, there are in excess of 11,000 cases right now.

Surprisingly, what is stopping the Indian Cricketer to lend aid to the suffering of the people? Could this be a sign of arrogance.

Is the sport of Cricket in India only about playing for the riches and being ignorant and blindfolded to the devastation the COVID-19’s second wave is ravaging the country they represent?

At present, the IPL is being conducted amid crumbling health infrastructure, whilst there exist shortages of health care and crucial lifesaving sources. The IPL is organized with layers of bio-bubble protecting players from viral outbreak.

Fact is there’s plenty done already for cricketers. They roam about in expensive cars, reside in salubrious penthouses, party away in priceless foreign destinations.

But when it comes to matters that require the attention of heroes so well-fed, just what is their response?

This is when the Indian cricketers, in particular, have a far-reaching influence over many things.

One can’t help but wonder if our cricketers are only bothered about forcing opinions through advertisements through which they get hefty monetary returns.

Are they not emotionally struck by the vigorous toll of death taking around them?

Their reluctance to take cognizance of the medical emergency looming in this country it not about their personal choice anymore, it is now about their duty as a public personality which they failed to accomplish.

It’s common knowledge that there are sources like the PM Cares Fund. Even a little bit of donation from some of the most successful cricketers whose take home salaries can only inspire envy can do wonders. And not just that, it will go a long way to save precious lives.

But where’s that gesture? Will it even happen?

So much is at stake in India, be it the frontline workers at the forefront of the criss and other staff working round the clock to get through this calamity, but our Indian cricketers- knowing well they can do a fair bit- are yet to act with their human side.

And the sad part is, it’s not that in the past, during the face of extreme urgencies, they haven’t done their part.

It mustn’t be forgotten that Indian cricketers have a duty to be good Samaritans, a role that must shine through off the field.

They are role models to the next generation.

Every act of theirs is emulated. A young India curiously awaits every new step of theirs.

So while India is in a state if crisis, how is it that they’re doing their bit?

Actually speaking, it’s not even about hefty donations; they can mobilise a lot of support to put several hands and legs behind the COVID-19 cause. We all know the sheer amount of volunteering work that’s been happening across various regions. A simple press conference, word of encouragement on media can go a long way to help.

It’s not that none have stepped up so far; Indian spinner Ravichandran Ashwin was one of the primary players to take cognizance of the reality faced by India. He kept his social media active to amplify the SOS(Distress) calls by the bereaved individuals and those in need.

It’s rather surprising that a foreign national participating in the IPL can step up and do his bit but our champion Indian cricketers who are likened to gods can’t?

Pat Cummins’ contribution recently in view of the current COVID crisis to India set a new precedent of what cricketers could do.

Veteran Australian cricketer Brett Lee joined the bandwagon to contribute in the best way possible to help people in India.

Shahid Afridi, a few months ago, auctioned a precious bat to raise funds for the fight against COVID.

What have the superstars done?

Let it not be forgotten that the Indian cricketers have a duty to be the good Samaritans that they can so often be off the field. They are role models to a young India. What they do is emulated, there’s a close watch on every act of theirs.

Today, India is in a state if crisis. And remember it’s not just about the hefty donations. Never a better time to show one’s compassionate side.

As an avid fan, I personally feel what’s stopping you, my dear Indian cricketers is the will to serve.

You may have your own reasons, but surely the affluent well-bread culture of Indian cricket can’t be such that it disables you to do your bit. Right?

The choice is yours to see both sides of the coin- to offer funds when most needed or simply focus on the cricket and stay mum.

But graciousness demands that you act! So dear Indian Cricketers, are you ready to support in these dire straits? 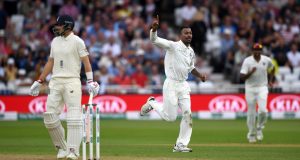