Perhaps we never thought about it much but there could be a reason why Deandra Dottin is named so.

You could put any kind of bowling attack to confront her and Deandra Dottin is gifted to connect the ‘Dots;’ pierce the gaps, pull all the right punches to destroy her opponents.

It could also be that so damaging is the impact of her batting that the world has simply come to dote on this very brave Caribbean batter.

Either ways, when Deandra Dottin comes into bat, what usually follows are two possibilities.

Either the ball goes on to meander in some random place, say the parking lot outside the ground, or the bowler’s shoulders drop akin to the hopes of the team challenging the Windies women.

And Deandra Dottin served an early reminder to the world of her genius way back in 2010.

In choosing possibly the best event to show her mettle- the 2010 T20 World Cup- Dottin brought upon destruction to an opponent not the easiest to tear apart- the Proteas Women.

In hitting a whirlwind century with her West Indies team absolutely tottering, Deandra Dottin penned a revolutionary chapter in the annals of women’s cricket long before Harmanpreet Kaur’s 2017 masterstroke against the Aussies (2017 ODI World Cup) furthered the love for it.

In a game that adores AB de Villiers‘ 360-degree range, loves the Gaylestorms, cannot imagine a contest minus Kohli and Babar‘s cover-drive, Deandra Dottin proved women could really fire missiles from the meat of the bat without much ado.

Not a contest a young debutant by the name of Chloe Tryon would remember pleasantly.

An effort that may have seen the great Shabnam Ismail shudder in disbelief.

Something Angelique Taai- 4 overs, 44 runs- would certainly have tried dearly to forget.

But a feat the entire Windies camp that saw it live would do well to tell posterity.

Well over half a decade before Carlos Brathwaite fired four consecutive sixes to become a T20 giant, Dottin did her bit to raise the bar for women’s cricket in the very format in which the West Indians are seen as demigods.

Probably, if Sir Ian Bishop had been holding the mic then, he’d have said, “Remember this game.”

But while many will tell you endless tales about how attacking Deandra Dottin’s 112 was, which eventually came of just 45 odd deliveries, nothing could ever truly capture the essence of the landmark without touching upon the circumstances in which it came.

The easiest way perhaps to explain it would be to think of a class-room teacher asking her pupils:

How often have you seen a century being struck in a T20 after the 10th over?

How often have you seen a century come of just 38 deliveries in a World Cup?

Moreover, how often have you seen a T20 century in a women’s world cup in its very first game?

There are things that the Australian women can do mightily well, like creating sensational winning streaks in the game. There are feats Indians can do with magic, like tumbling the biggest of opponents.

But where it comes to firing surface-to-air missiles in the opposition dugout using no more than pure wood, then there are no better than the West Indians.

It mustn’t be forgotten that on May 5, 2010– the odds were not heavily but hugely stacked against the Windies’ favour.

The Proteas Women fired the opening salvo by winning the toss.

The Windies were put into bat.

Think of the pain the Indian fans felt when Tendulkar departed early in the 2011 World Cup final?

What other moments in cricket have seemed truly as heart-stopping?

Well, for the West Indies women, losing Stafanie Taylor for 1 was just as painful that day.

But more trouble was to follow as from 1 for 7, they’d drop to 2 for 12, before dropping completely to a state of remorse at 4 for 52.

This was nearly the tenth over as Brittany Cooper- no slouch with the bat- departed.

But then appeared Deandra Dottin akin to an architect tasked to repair a house in shambles, except that the repairer turned into a wrecker-in-chief seeming all the while productive work was going on, completely unperturbed as if the scorecard wasn’t in any dismay.

Cricket is a game, they say, that’s measured through the impact an individual has over his opponent.

The entire Windies outfit managed to hit 4 boundaries while Dottin on that sunny afternoon struck 7 on her own.

The only other batter who managed to put the ball over the ropes- and just once- was Cooper. Deandra Dottin smoked 9 on her own.

Of the 175 that the Windies women fired against the Proteas women, Dottin was responsible for 112 while the South Africans were responsible for bowling short, wide, full and what’s called in ‘the slot.’

Never again has a century been scored in a Women’s T20 world cup from number six.

No one has gone onto score a faster T20 century in the women’s game, which means the quiet servant of West Indies women’s still sits on top.

But what’s rather painful and warrants intense introspection is whether the effort of one of Barbados’ finest exports to the West Indian cricket is hailed in the same way we remember say De Villiers massacring the West Indians in 2015?

Though what mustn’t be forgotten is that De Villiers and Sharma, true greats of the game, were 31 and 27, respectively, when they reached such glorious heights.

Nothing about her batting- a style of free- hitting quite like a kick boxer who attacks throwing all the punches has changed to this day.

Eleven years ago, she stepped out of her crease to Ismail. That’s a sign of intent.

She used the depth of the crease to Dane Van Niekerk, playing the leggie being as unafraid as a tightrope walker aware of the sensitivity of the fall.

In doing everything in true-blue Caribbean fashion, Deandra Dottin fired a knock most batters, regardless of playing the men’s or women’s game, would love to emulate.

But every time we’ll underplay the importance of that effort, we must also truly ask ourselves- just how many centuries does a Steve Smith, Kane Williamson or Virat Kohli have in T20 World Cup as on date? 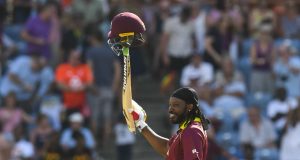