In their playing days, Mahela Jayawardene and Kumar Sangakkara forged an iconic partnership. Their consistency in scoring runs allowed Sri Lanka to register many victories in all the formats. Interestingly, both of them were at the helm of Cricketing operations for Mumbai Indians and Rajasthan Royals respectively in the IPL. But, the absence of fresh Sri Lankan talents plying their trade in the tournament was well conspicuous.

So, does that signal something?

But, Dimuth Karunaratne carries a renewed baton of hope.

Far away from the T20 frenzy in the IPL, Sri Lanka  locked  horns in a two- match Test series against Bangladesh. Dimuth Karunaratne’s marathon innings of 244 in the first match while opening the innings was marked by characteristic resilience and ability to wade silently through troubled times. Most importantly, the captain’s knock denied Bangladesh any chances of putting Sri Lanka under pressure after scoring 541 in their first innings.

It was one of the capital innings played by any opener in the last few years. It was hardly a surprise as Karunaratne has the tenacity to play such long innings. His man of the match performance gave Sri Lanka a chance to make a remarkable comeback against a spirited Bangladesh in the second match of the series.

He once again scored heavily in the second Test at Kandy thereby allowing Sri Lanka to win the bilateral series 1-0. His first innings score of 118 was decorated with fluent stroke play and in the second innings he took the attack to Bangladeshi bowlers and scored at a strike rate of 84.61. This allowed Praveen Jayawickrama to deliver a match winning performance against adept players of spin bowling.

So, his versatility is remarkable and eye catching.

In 2017, Karunaratne became the second Sri Lankan opener after Tilakaratne Dilshan to score three Test Centuries in a calendar year. Unsurprisingly, he was given the charge of leading his team against South Africa in February 2019. Apart from that, he even led the Sri Lankan Team in the 2019 World Cup in England. Though, Sri Lanka didn’t even make it to the semifinals but Karunaratne emerged as calm and composed character as the captain. Not only that, in Sri Lanka’s first match in the tournament he became the second cricketer to carry his bat in the World Cup.

His penchant for scoring runs in the Second innings makes him stand on a unique pedestal among other fellow openers from other countries. Apart from such rare capabilities, he also has the ability to score under difficult circumstances. He scored a well compsed 196 in Srilanka’s first ever day night test match at Dubai in 2017, his most prolific year as a batsman. In 2019, he was unfortunately hit on the head by a Pat Cummins bouncer in Canberra. In spite of that, he came back and played a valiant knock of 59 runs.

It is true that he has registered his best performances in the Test format, but he is slowly emerging as a solid batsman even in the limited overs format. His style of batting is well reflected in his captaincy and he has already begun to deliver positive results for Sri Lanka. A whitewash over West Indies in West Indies under his captaincy bears testimony to this fact.

In a Cricketing epoch where dogged Test Match batting while opening the innings is slowly becoming obsolete, Karunaratne has quietly emerged as a batsman who scores meaningful runs for his team. 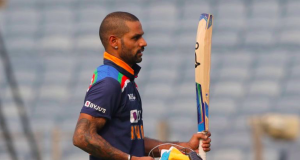 Is Shikhar Dhawan Still A Big Thing for Indian Cricket?

Saksham Chugh - July 19, 2022
0
When Shikhar Dhawan drove Reece Topley towards the covers early on during India’s chase in the third ODI,...