Long before the Pakistan women’s side got talents like Nida Dar and Aliya Riaz, a time way before legends like the great Sana Mir exited the game, the fulcrum of white-ball cricket revolved around batters like Nain Abidi. Responsible, dedicated and focused.

You’d say, talents that knew how to build an inning, repair a broker one and counter-attack when needed.

And back in 2009, Nain Abidi, the first-ever Pakistani batswoman to strike an ODI century, transferred her penchant for 50-over cricket into the game’s shortest format delivering a series-winning performance that ought to be hailed.

In doing so, she displayed the same keenness to score runs- especially when needed- on foreign swinging conditions that she’d demonstrated on testing sub-continental turfs.

In 2009, a year perhaps most fondly remembered for the Pakistan men’s side becoming the champions in the T20 World Cup, it wasn’t that the women weren’t doing their bit in making the country proud.

While the majority of us may have remained caught up in what was happening in England, with Umar Gul and Shahid Afridi wrecking Sri Lanka to make history, the Pakistan women’s side were embroiled in an interesting T20I challenge, which they’d excel at and even before the men’s team brought glory home.

Quite like a page-turning novel that begins slowly albeit also with a few letdowns before becoming a page-turner, Nain Abidi’s performances in the tour of Ireland came to fruition after a few missed chances in the opening games.

Which batter, you’d ask, would like to open a tournament with a duck? But as the dedicated right-hander began on naught in the only T20I played against Ireland, before going on to make a disappointing 4 off 11 in the solitary ODI that followed, the fan may have wondered what was going on?

The two games done and it was time for Pakistan to take on Nottinghamshire women and hosts Ireland in a tri-series – the RSA T20 cup.

But was one of their main batters back in form?

Akin to a blaring headline of a newspaper that leaves a few heads scratching, in the series-opener against Nottinghamshire, the usually consistent Nain Abidi disappointed again. A 5 off 8, lasting for no more than six minutes was just not her.

Though, luckily, Pakistan won the contest thanks to Urooj Mumtaz’ leg-break magic.

Next up was the contest against the hosts, the very side that had trumped Nain Abidi’s Pakistan on the latter’s arrival, in winning the T20 international. And though the runs didn’t return in aplenty, the batter was able to stay on the crease for 20 minutes.

In some ways, for a regular maker of runs whose bat had gone a tad bit silent, this was a bright positive. How?

Nain Abidi’s duration of stay at the crease was more than what she’d lasted for in the three previous outings. Although, the maestro of off-break Sana Mir turned up her magic to win Pakistan a low-scoring encounter.

But having not scored in her usual gritty fashion, despite having gotten one chance too many, Nain Abidi finally decided that enough was enough leaving her best for the very final stages of the tournament.

With two games remaining and Pakistan firmly placed on top of the charts, the familiar spark of run-scoring returned.

The same bat that had gone silent thus far, one that was so adept at piercing the gaps on either sides, playing adventurous sweeps and heaving the flighted one over cover, was back to business.

In the third game the series, against an Irish attack featuring the Joyce sisters, the experienced medium pacer duo of sisters- Heather and Jill Whelan- one saw a different Nain Abidi at Dublin.

On a cold afternoon, with Pakistan batting first, there was a lot of damage control that had to be done.

This wasn’t a side that was marauding runs with ease; this was a unit that would go on to lose the-then newcomer Bismah Maroof for 5 and not long after, Nazia Sadiq for 7.

Having been 1 for 6 and then immediately 2 down for 7, the inning that Nain Abidi took control of was going downhill. But playing saviour-of-the-day courtesy a run-a-ball 55, with shots on all sides of the ground, the batter was back in business.

Make no mistake for there must have been tremendous pressure on otherwise capable shoulders, having faltered in each of her previous outings with the bat.

But the cover drives and pulls and the quick singles suggested a sort of urgency that her country had to be served with rich aplomb.

What distinguished this fifty was the quantum of hits it featured to the fence. It was emphatic to note that while the whole of the Pakistan side was able to strike four boundaries collectively, Abidi struck the same on her own.

The focus and intent back to where it belonged, in those piercing eyes, Nain Abidi occupied the crease for 80-odd minutes on an afternoon that went from being cold for Pakistan into being balmy with the green of health.

A competitive 116 was put on board and the number 4 had done her job carrying her bat well onto the end before being run out on the final delivery of Pakistan’s inning. In the end, a Sana Mir and Asmavia Iqbal special cut short Ireland’s hopes of upsetting Pakistan and the visitors moved to play the last game against Nottinghamshire.

But before we get to that one, it must be stated in no uncertain terms that seldom has a batter seemed so at ease and never whining about a change in her batting position as Nain Abidi.

Having been the number 4 bat in the previous game, on May 29, i.e., this very day albeit twelve years back, she was sent one down.

The scorecard once again didn’t cut a pretty picture with the side losing Maroof and Sadiq inside the first two overs.

But Nain Abidi was at one end, looking to stabilise what seemed a patient’s reading marked by erratic heartbeats.

Nursing the innings with caution, and playing watchfully, Nain negotiated the tricky slow-medium pace of Nicola Myers and the medium pace of Jasmine Titmuss. But there was more medium pace on offer on a slow surface where the ball was doing the talking- Sonia Odedra and Lily Brown managing to keep the proceedings quiet.

But Nain Abidi didn’t give up, converting a cautious start into a glowing demonstration of cover drives and silky flicks toward the fine leg.

In all, she struck seven boundaries, the most by any batter that day from either side of the opposition. What was crafted in the end from a 40-minute stay at the wicket was a quick fire 45 off just 36.

On the other end, Asmavia Iqbal looked in fine touch and a glowing fifty enabled the team to mount a very healthy 139.

In an era where there were no power plays and the game remained on equal footing, batters not necessarily enjoying an undue advantage over bowlers despite this being cricket’s most wham-bam format, every run was precious.

And it looked good when it came from the bat of the determined Nain Abidi.

In all, she struck 112 runs in the series, the most by any batter and Pakistan rediscovered the lady who fell in love with batting having first wielded a cricket bat in her early childhood.

That said, it’s a shame that in an age that sides with cricketing archives and minute-by-minute of game commentary, with dozens of websites offering unparalleled analysis of the game- you and I cannot revisit Nain Abidi’s brilliance for there’s hardly a clip you’d find of those two fine T20 knocks be it YouTube or any video platform you prefer.

Time for administrators of the game to give this bit a think? 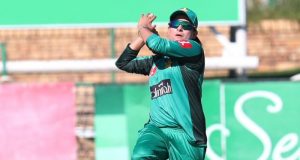 Sana Mir – The Leader Who Changed The Meaning Of Women’s...

Shruti Banerjee - April 27, 2020
0
What is the first thing comes to your mind when you hear the name Sana Mir? Someone who wore a smile on her face...