One of the great misnomers about Cricket is that glories are only restricted to runs scored, wickets clinched, catches taken and demonstration of excellent leadership. While these are straight A’s in the report card of a cricketer, there’s something more that counts.

And in September 2020, a famous English cricketer, though dismayed at what was done to him, demonstrated conduct of mark superiority that says a thing or two about his character.

Leaving the series against Pakistan abruptly, the man immediately rushed to Christchurch, attending to a sick dad stricken by brain cancer.

Seeing the same parent on a literal death bed, who more often than not, is the force behind our introduction to the game, teaching us how to hold the bat, can be heartbreaking multiplied by infinity.

Yet, it was at this time, during his family’s worst personal crisis that the cricketer received some exceedingly harsh words from a random fan. So dejected were he, that he decided to put screenshots of the vile abuses hurled at him for no apparent reason.

There was stuff effusively sprinkled by the F-word with things like- you disgrace, you awful human being. But it didn’t stop there; the miscreant said, “May your parents die of AIDS and may you get paralyzed!”

At a time where even the most well-behaved man would’ve lost his cool and lodged a police complaint, going bonkers in the mind, at all these times, Ben Stokes, the receiver of undue ire, kept silent.

He never spewed a drop of venom when he could so easily have.

To borrow a leaf from the realm of Rock Music, it was offering a rose to the one who wielded a gun at you.

And it’s this character of a cricketer utterly devoted to upholding England’s cause in the game that marks Ben Stokes in a league of his own.

Most love Ben Stokes’ fiery character, and make no mistake he’s been no monk. Following a bar feud nearly half a decade back that saw him out of active cricket for a prolonged period, he’s sobered down on temperament, which although he never expressed in unforgivable expletives on the field.

When he could so easily have grabbed Marlon Samuels‘ collar for an indescribably ugly rant, the former Windies player going as far as saying, “Give me 14 days with your wife,” Stokes maintained dignified silence.

The episode is when the left-hander, over a podcast, had been asked if he’d desire a 14-day quarantine for his worst enemy, and asked if he’d specifically wish that for Marlon, Stokes simply offered, a ‘No!’

Character makes great cricketers. We saw a beautiful example of that on July 14, 2019. In the final over with the ball thrown at the batsman’s end hit his bat only to go for an unforeseeable boundary, Ben Stokes raised both his hands in apologies, feeling truly guilty of the mishap that may have sunk Williamson’s heart.

Upon winning the World Cup, when he could’ve rubbed his victory on the Black Caps’ face, making way for over-the-top celebrations, he hung out with the Kiwis, feeling their despair.

It was almost a Flintoff consoling an aggrieved Brett Lee in the Ashes Test Australia lost many summers ago.

Interesting and impressive it is then that with Freddie Flintoff’s departure bringing about a clear vacuum of a world-class all-rounder, Ben Stokes has emerged wearing cool weathers on his sleeve.

The man who can turn magic with the ball and turn on the heat with the bat, successfully transporting a Test audience into an almost T20 landscape, having churned magic in the most indescribable Test thrillers.

For time immemorial, whenever Ben Stokes’ cricketing career will be deliberated upon, there’ll be special mention of his 2019 Ashes heroics.

Just how often has a Test, fading away into oblivion for the hosts, been brought back alive from the dead with no more than one standing wicket.

We love reminiscing the famous Greenidge-Haynes partnership. We hold special love for the Hayden-Langer and Sourav-Sachin pair.

But for as long as the Ashes will remain relevant to Cricket, we won’t forget the Jack Leach- Ben Stokes stand that won the Headingley Test.

Flicking someone like Cummins off his hips for a six on the final day with the ball landing six rows back in the stands. Pulling Hazlewood for arguably the finest pull strokes that evening, before reverse-sweeping Lyon for a towering six, as England were still 50 away with one wicket in hand.

Flirting with danger in a random rush of veins is a fool’s idea of paradise. But backing oneself to go for the risk is a brave man’s ploy.

That balmy afternoon Stokes had nothing to lose, so he went for the kill, destroying Australia for perhaps one of the finest English wins ever in a series that means lifeline for audiences in two separate continents.

But that Ben Stokes special wasn’t a flash in the pan.

Three years before, being as far from England as is Shivnarine Chanderpaul to bowling yorker-length toe-crushers, Stokes was against a Rabada, Morris and Morkel-powered attack at Cape Town.

Playing then in just his seventh Test series, a 25-year-old with just 19 Tests against him before touching down South Africa, Stokes blasted his way to a 258. Six years hence, none among the triumvirate of Morgan, Buttler, and even Joe Root have bettered Ben Stokes’ Test best score.

But implicit in that drawn contest was the sheer audacity of the man’s effort. During his 338-minute stay at the crease, he took no more than 198 deliveries to carve his maiden Test double.

And while many will remember his glowing cover drives, what one must duly credit is that Ben Stokes fired a humungous ton from down the order.

A mindful cricketer who exposes the chinks in the opponents’ armour, Stokes doubles up as a clever medium pace known for his nagging consistency, that’s earned him 237 dismissals already, including 163 in Tests alone.

Today, when most fear facing an English attack, it’s not down to Wood’s sheer pace and Archer‘s harrowing speed alone. It’s the realization that when Broad and Anderson are done hounding the batsmen, Stokes will come up to drain the batters out putting a lid on free scoring.

In 2020, against the West Indies, in a series where he fired the most runs on any side, 363, Stokes- the athlete was in full flow.

Defending ever single chance of a run in the 1st Test the Holder-led side won, a straight drive by Jermaine Blackwood on Stokes saw the latter run down all over to the long on boundary.

Not only did he save an additional run but threw it right to the keeper’s end, nearly affecting the much-wanted dismissal.

As the stakes soar tremendously high in international cricket, Ben Stokes with his penchant for performing across formats is continuing to impress.

Winning games in sublime fashion and raising the bar for the battle of world’s best all rounder.

Given we can never have a Kallis-like figure ever, the model example for the 21st century all-rounder has already been drawn.

While he may not be a Sobers or Kallis, the benchmark for today’s great all-rounder-in-making seems to have found a figurehead in New Zealand‘s finest export to England.

Don’t be surprised if coaches are already telling pupil- you still have work to do; lift your all-round craft to the Ben Stokes-level of greatness. 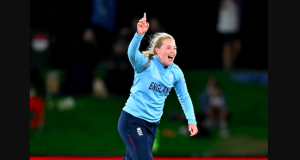 Chandhana Gogineni - May 6, 2022
0
Cricketers shuffle between what often are exasperating choices. At any point in time during their careers, they have...