The word ‘Perseverance’ might not hold too much relevance for today’s modern-day cricketer who’s often seen shunting down the path of a shorter route to success. But there are cricketers like Devon Conway who persevered and kept at it even after a string of average returns in South African domestic cricket.

Being part of the same under-19 South African batch featuring Temba Bavuma and Quinton De Kock, Conway, despite having loads of talent was not able to make any headlines to grab selectors’ attention.

It compelled him to sell everything and move to New Zealand to start afresh. His is a classic tale of struggle and strife. Most cricketers who truly mean to succeed won’t mind selling a car. But imagine having to sell your house, your belongings, having been mistreated by a cricket board only to find that after doing away with your precious belongings, you need to start afresh and that too, miles away from home comfort?

Nothing makes us shudder in disbelief than uncertainty.

Devon Conway was 26 when he faced peril nightmares. Now at 29, he is playing Test cricket for New Zealand, having not just debuted at the ‘Home of Cricket’ but having struck a marvellous a double hundred.

Debuting at Lord’s– the spiritual home of Cricket- can easily make you week in your knees, but seeing Conway even in the initial overs against the exceptional pace attack of Broad and Anderson, it was apparent that Conway was mentally ready to own the stage.

His first boundary, a classical cover drive through the off side meant he wasn’t waiting for the bowlers to get one up on him, rather he was out there to stamp his authority on the bowlers from the start.

To make a double ton, you would expect to give one or two chances to the bowlers, but Devon Conway was so in control with his stroke play that he hardly put a foot wrong, which makes this debut innings of his nothing short of a master class. Add to that the heckling challenge of being against a bowling pair of Broad and Anderson who share no fewer than 1000 Test wickets between them.

Nobody gave Devon Conway a chance before the start of the innings. Frankly, even in the fantasy cricket, the great impetuous habit of a million few today, only 25 percent of people picked him up in there team. And why would you, when there are likes of Kane Williamson, Ross Taylor, Joe Root were around.

It’s like placing your precious dime on the glowing stock not a new one.

And yet, it was Devon Conway who came out of syllabus for many.

Well, in putting his name straight into the record books by becoming the first in centuries to hit a Test double upon debut at Lord’s, Devon Conway has shown everything is possible in cricket and it’s not just happenstance.

A story of it being ‘never too late and never giving up’ has found a worthy custodian in New Zealand’s brave left-hander. What a start. Perhaps the first of many fine knocks to come. 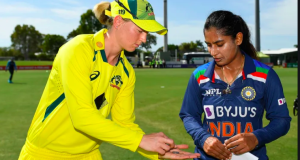 Chandhana Gogineni - October 1, 2021
0
India Women's tour of Australia has had its own set of ups and downs, though both for the...