Logic has no space for it, not with any modicum of reasoning. But, a rather puritanical school of thought- that’s stuck on for centuries- argues that the real place of women belongs in the kitchen, running errands and amid domestic chores. Conventional thinking may never come to believe in the progress of women. Though, truth is, women aren’t and have never been a conveyor belt on whom you’d land your egotistical personalities, operating them with a push and stop button as if they were less of a human and more of a machine sans emotions.

But at the same time, history has also birthed heroic figures who’ve battled conventions to fight for change. And in doing so, they’ve challenged restrictions, creating space for the welfare of the others; a people hitherto suppressed to express their talents.

And on June 11, what could be better than paying homage to a woman whose association with cricket is perhaps much like the inseparable bond between a mother and daughter?

Someone who did years back to the women’s game which none were able to, a figure of heroism that fostered a culture of change, opening doors of possibilities, which once seemed akin to a wall utterly uncrackable.

Truth be told not everything about 1939, a bloodied year since it marked the start of the Second World War was dreadful. To the cricketing world, in particular, that very year, an icon was born in Sir Winston Churchill country, one we know as Rachael Heyhoe Flint.

One we will never forget and owe immensely to.

Most cricketers who are revered create records and leave behind a legacy powered by innumerable runs and wickets. But only a few, perhaps not even a handful, are directly involved with changing the established order of the sport itself.

If there were ever a book of the many firsts achieved by the women’s game, then the menfolk who feel chuffed each time a male cricketer’s record is spoken of with pride would actually feel dainty by the list of feats achieved by women.

The modern conception of the game owes the feat of recording the highest-ever team total in an ODI to the White Ferns: the imposing 490 that a women’s side made, not the mens unit.

The first-ever world cup to be held wasn’t the one that took place in 1975; it had already been held two years ago, and in the heart of England.

But it may never have happened had Rachael Heyhoe Flint not dedicated herself toward its conception and eventual funding.

To a generation obsessed with E-gaming and Fantasy sports, ever eager to place a quick buck on a bet or a squandered chance, Rachael Heyhoe Flint’s life is a lesson in dedication and pure effort that warrants some sincere introspection.

Spending wee hours of the morning brainstorming about how to go about a tournament of epic proportions, one that would allow women to express their cricketing talents in a never-seen-before format and spectrum, it was the effort of a single woman- Rachael Heyhoe Flint that convinced English millionaire Jack Hayward to put funds for the first ever Cricket World Cup.

Fighting for the right of the English women to have a team of her own, Rachael Heyhoe Flint ran from pillar to post to convince administrations about giving a green signal; a coterie circumspect about the sight of women wearing skirts and donning pads and boots running about in an open field.

In a career that spanned twenty three years, Rachael Heyhoe Flint, the conceiver of the modern women’s game, wasn’t just the giver of hope to tens of thousands of women, she was also a standard bearer of excellence in the English game.

With an ODI average that would please everyone, whether a Meg Lanning or an AB de Villiers, Kohli or Heather Knight, Flint scored 643 runs from just 20 innings, at 58, emerging unbeaten on 9 occasions. And in the longest format, she excelled with unsparing genius scoring almost 1,600 Test runs from a mere 38 innings, with 3 centuries and 10 fifties.

For someone who was a run-machine, unflustered comfortable across formats, imagine all that she may have ended up accumulating with the bat having only played 45 international games?

Perhaps sterling achievements like becoming the first woman to captain a side for 12 consecutive Tests or being the-then highest scorer in a Test inning as a captain (179) were feats that commanded lesser attention from the ever-giving Englishwoman.

For the purpose of some lives is to continually work for the welfare of the others even when one hangs the boots or puts the bat against the wall.

In the long list of remarkable feats about Rachael Heyhoe Flint, it’s vital to note she also worked as a freelance journalist, and that too during her active days, making a case for the women’s game and its notable achievements at a time where few publications were interested in covering a sport that focused on women, which, according to brazenly biased minds didn’t belong to the cricket pitch.

This is when Flint, by self admission, shared she failed as an English major thrice.

As a leader at her prime she used her sharp bent of mind and extraordinary leadership skills to ensure England remained unbeaten in six consecutive Test series.

The very Oval we regard for having seen some of Warne‘s finest spells, a destination where Rishab Pant became the only Indian keeper batsman to score a century in 2018 was witness to a knock of monumental focus in 1976.

Flint, in the course of striking a career-best 179 against Australia, occupied the crease for 521 minutes.

But truth be told, she didn’t retire in 1982, the year where she played her final international contest; for some legends never leave the crease.

Continuing to work for the dignity of women’s cricket, it was Rachael Heyhoe Flint who was singularly responsible for the first central contracts awarded to the female England internationals.

For a person who could’ve behaved in a stiff upper-lipped fashion for all she achieved, a career that scaled rarest of heights- not to forget, she ended her 22-Test career without losing a single game- Flint was the epitome of simplicity and cheerfulness.

Right before her death, aged 77, Flint had been rightly honoured as a working House of Lords peer from the onset of 2010.

In the imminent future, the iconic MCC will be erecting a statue in the honour of a woman who gave her life to a sport in which she wrote new chapters that may never have been penned without zeal and tireless efforts.

And one supposes, upon admiring the statue, the onlookers will stare eye to eye with not just a figure of reverence, but a timeless memorial carrying a vital lesson: that it took a courageous forward-looking woman to encourage women to take up the game and enter the field in an era where mansplaining was doing its bigoted bit. 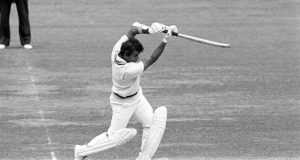