If you are a fan of Caribbean cricket, then perhaps the present moment is a rather interesting one. On the one hand, there’s massive disappointment with the result of the maiden (of 2) Test against the visiting South Africans, fans pouring their hearts out over social media on the meek surrender offered by a side boasting of names like Holder, Brathwaite, Hope, Chase, Cornwall, and Roach. Then, on the other hand, there’s also keen interest in a very capable and exciting younger crop that’s taking huge strides to break into the elite higher stage. These are noted talents who’ve already made their presence felt at the Under-19 stage and are taking the next precious steps to climb up the national ladder in order to break into the West Indies national team.

So today when one speaks of the young, up-and-coming West Indians, then more often than not, our attention goes to the likes of Jyd Goolie, Kirstan Kallicharan and Alick Athanaze, to quote a few. But there’s also a young man, someone who led the Under-19 West Indies team in 2020 and did so with a sense of calmness and passion that you’d liken to someone who carries a mature head on his shoulders.

A thinking cricketer with a host of attacking strokes all around the wicket, there’s a huge reason why Kimani Melius, aged just 20, is making news.

He’s not at home at the moment, amid the comfort of the joie-de-vivre presented by the picturesque St.Lucian beaches, a paradise replete with cool breeze flowing through the coconut trees and eye-pleasing pineapple plants. Somewhere where his coach and parents can place the compassionate sights on the watchful batsman.

Kimani Melius is busy preparing for his next club game, miles away from the home comfort of the West Indies, as he manages both swing and seam, pace and bounce on uncomfortable English pitches that can ruffle up your feathers if you are as attentive as a student staring outside the window whilst the lecture is on inside the classroom.

What he has at his disposal is a magnificent century, his first for an English club and surely, noticing his eye-pleasing craft, the first of the many to come in conditions that can rattle even the best.

But just a few days ago, when Kimani Melius stroked his way to a fantastic, 112 off just 42 deliveries, one thing was certain- someone special was knocking on the selectors’ doors, not some average joe.

In the course of an action-packed ton that took his Club Westhoughton CC to victory on June 11, 2021 in the Bolton League 1st Division T20 game, Kimani ensured one thing.

That the boundaries would come akin to flying bullets in a John Wick action saga, and quite like the hero of the gun-blazing action franchise, he’d remain unbeaten in the end.

As a batsman- he’s both careful about shot selection and explosive, not necessarily in patches that bloom with fours and sixes and as a person- he’s humble, careful about what he speaks and prefers to eschew the shenanigans, quite the prototype of the calm cricketer who truly comes to life when challenged on the pitch.

For that is where Kimani Melius sees himself being most happy, away from home, a world where the moment the pads are donned and the helmet is put on, it’s him versus the ball, in the battle for upmanship.

Speaking to Caught At Point in an exclusive conversation, the mild-mannered youngster who bulldozed Farnworth CC 1st XI promises a lot of excitement in the times to come shared, “It was exciting playing the swinging ball and it was, by far the biggest challenge too. But I was willing to get comfortable in doing the uncomfortable.”

When I quizzed him about just how excited were he in setting foot for the first time for a club challenge in England, the avid youngster replied, “Many great players over the years have come to England to gain experience and sharpen their technique, and I want to do the same!”

And that’s the thing that excites about this promising youngster- that he’s so keen to improve on his game. Make no mistake, he was just 19 when he smoked a 34-ball-century in a T10 match for St. Lucia-bound Gros Islet Cannon Blasters, which was some time before he’d end up scoring most runs for the West Indies in the Under-19 world cup, no mean feat for a batsman ready to face stern international contest.

Thus far, the barely 20 right-hander has already smashed 96 fifties and 33 centuries (across all levels of professional cricket) and it seems the time is not far where we’ll get to see one of the finest bats from around the Caribbean stamping his authority at the national level.

We wish the batsman with an innocent smile and cool vibe all the best for his future endeavors. 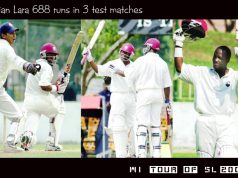 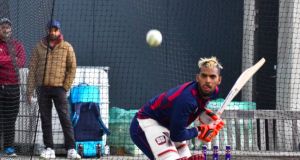 How Windies vs The Netherlands ODIs Offer A Fine Prospect Of...

Abhishek Srivastava - May 31, 2022
0
The One-day series between The Netherlands and West Indies will give an opportunity to both teams to try out new players given...