Form is temporary, class is permanent. But neither holds much significance without factoring in ‘age.’

So where the current West Indies side stands, particularly in the Test format, it appears the focus is primarily on absorbing the youth. Drafting the young bloods in. And the moment you hear youth– your thoughts stick primarily with the likes of newly-arrived Jayden Seales, the fiery Alzarri Joseph and a rising presence behind the stumps- Joshua Da Silva.

Not a needless chirper behind the stumps. Not someone who’d like verbal engagement with the batsmen in front, and definitely not someone who’ll practice monk-like silence either- Joshua Da Silva is a spirited character.

The guy who has a feel for a contest and wouldn’t back down without a genuine try.

Joshua Da Silva is the enthusiasm the fans still carry even as they see their West Indies being punished, time and again, for playing cricket that’s often mediocre, at best, especially when facing tougher opponents.

He’s also the enthusiasm the team so desperately needs to forge the long-awaited comeback to reckoning.

And yet, in being all this, Joshua Da Silva, who’s all of 23, is an anti-thesis to all things Caribbean.

You won’t associate Andre Russell-like hits muscled out of the park with him. You won’t see a Gayle-like dancing down the track to seamers. There are no no-look hits to the fence like the ‘Spiceman’ Andre Fletcher.

He’s mind and focus, whips and cuts, patience and persistence, all of which he displayed at the very first opportunity awarded to him by his West Indies.

On December 13, 2020, with the West Indies following on a huge first-inning New Zealand score (460), having been bundled out for 131 earlier, young Joshua Da Silva found himself facing chin music by Neil Wagner and great outswing by Tim Southee.

He was miles away from breezy Caribbean comfort where slow pitches begin to become lifeless usually on the third day; he was batting on a bouncy Wellington turf amid biting winter.

Yet he dug in and soldiered on for 135 minutes. During his 84-ball-stay, the right-hander made 57 valuable runs. A fifty on Test debut.

Though, the runs weren’t enough to save his tumbling West Indies, it did ensure one thing- the tourists had found a batsman who was willing to play the patient game.

The kinds of which would make the already famous Jermaine Blackwood and Kyle Mayers prominent and prolific scorers.

The kinds of which we saw a Chanderpaul play when the chips were down. But these are early days for him.

Let us tread with caution and not get too far ahead of ourselves.

Young Joshua Da Silva- a lover of pepper sauce, a follower of the late K Lion’s music, someone who can’t stay without Soca music and the tedious regularity of a workout- is just thirteen innings old- Tests and ODIs combined.

There’s not a tremendous lot he’s done and has a long distance to cover before he can lord headlines and draw fans in pure awe.

But the little that one has seen of the Trinidadian, who’s already had a stint playing Club Cricket in the UK, it’s hard to snub aside the reassurance he brings to the lower order.

Let us also factor in a key challenge Joshua Da Silva confronts each time he pads up to walk into the middle.

His batting slot is one where scoring runs is often a challenge akin to staying awake during dreary lessons in Astrophysics after having polished off a particularly stuffy lunch.

It’s the sort of batting position where by the time you arrive, a lot has happened already, where chances of blooming are far less exciting than what a #3 bat or 4 would have.

Yet, in stark contrast to his usual batting position, during the Second Test against Bangladesh earlier this year, a game West Indies won with spin magic of Cornwall and the pace of Joseph and Gabriel, Joshua Da Silva found himself staring at a precarious situation.

Batting first at the Sher-e-Bangla, he walked in as the number six with his team in trouble at 178 for five. But, by the time he departed, the scoreboard had been stabilised through craftsman-like reshaping.

It read 384-6. Of these many runs, Joshua Da Silva compiled 92. And of the 388 deliveries that had been bowled in the stand with Nkrumah Bonner, Da Silva faced 187 on his own.

That was a turning track. It assisted spinners, Bangladesh having one too many in Mehidy Hasan, Nayeem Hasan, Taijul Islam- bowlers the Trini had absolutely no prior experience facing.

But he held his nerve. Though perhaps even to this day, he may wonder, what if he would have read Islam’s straighter one that kissed all three stumps a bit better?

Joshua Da Silva gave indication of the virtue of patience and the good old-fashioned lessons your coach tirelessly instructs on the field- about using the depth of the crease, about reading the line of the ball. About simply taking time.

Remember Elvis reminded us well back in time that only ‘Fools Rush In!’

And it would be foolish to make little of the batsman who scored tons of runs in the West Indies domestic season- 2019-2020- wherein he fired 507 first-class runs, uprooting Dinesh Ramdin from the fray as if a triumphant captain takes off all three stumps upon winning.

But Joshua Da Silva must embrace the truth surrounding West Indies. They’re still- despite their utterly attractive spurts of occasional brilliance, on offer in both Test and white-ball cricket- a work in progress.

An unfinished painting that, when complete, can raise a fortune in a Sotheby’s-style auction.

Their worries are primarily connected to their batsmen being the weaklings.

An unsteady opening order. Brathwaite himself looking frail with each passing inning. Unsure about whom to open with. A Shai Hope who’s now gone, nineteen innings without a fifty. A Jason Holder who seldom makes lots of runs despite having every shot in the book.

An in-and-out of form Roston Chase. Moreover, a constantly shuffling line-up that knows little about consistency or regularity.

So every single inning that Joshua Da Silva will play, must be for him, a new possibility, about the big hope to resuscitate a team world cricket would so dearly love seeing play at its best.

For today when you see a South African pace attack mowing down the top order, your thoughts naturally swing back in the direction of – “what might have happened if Lara and Chanderpaul been there in the middle.”

And the moment teams like India arrive, as they did back in 2019, there weren’t runs on offer; but hat-tricks and fifers for pacers.

To say, therefore, that West Indies dearly need contributions from behind the stumps- agile, diving catches, a safe pair of hands- as well as determinedly collected runs would be quite an understatement.

The opportunity is there. But is Joshua Da Silva ready to go the long way in becoming a mainstay? The ball is in his court. 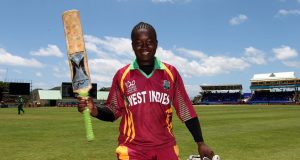 Dev Tyagi - May 6, 2021
0
Perhaps we never thought about it much but there could be a reason why Deandra Dottin is named so. You could put any kind of...