Time, the word that defines our very existence is a healer for some and a rather long- journey of misery for others albeit ironically it never stays the same for both.

Perhaps misery because when things don’t go your way every minute seems like days, let alone imagining what years would feel like.

Ask South Africa, the once mighty kings of world cricket and they would whole-heartedly agree!

The Proteas spent four years in heaps of discontent, all but losing every test match on the road away from home.

A dreaded figure of nine consecutive tests going south across four misery-ridden series dating back to the English summer of 2017. Agonising defeats at the hands of England 3-1, Sri Lanka 2-0, India 3-0 and more recently Pakistan 2-0.

Let that sink in!

The last away test series win for these once unbeatable visitors, had come against New Zealand, way back in March of 2017, a 1-0 conquest. A series that only featured captain Elgar, Bavuma, Rabada, Maharaj and de Kock from the current team.

As said earlier, time is also a healer and it never stays the same for everyone.

Yes, The Proteas were finally able to heal their deep wounds of defeat with the much-needed ointment of victory courtesy a maiden and mouth-watering hat-trick by the ‘Maharaj’ of South Africa, Keshav as the West Indies or as my friend says Worst Indies were conquered 2-0.

In this pursuit, Keshav Maharaj became only the second South African to take three consecutive scalps after Geoff Griffin against England, way back in 1960 at the home of cricket, Lords.

What impressed one most about this performance was the accuracy with which this left arm spinner bowled constantly on a rough patch created outside the batter’s stumps by his fellow fast bowling compatriots.

Make no mistake, to target a particular patch takes loads of practise and Maharaj was certainly up to the task grabbing the wickets of Powell, Holder and Da Silva in just his eighth over of the innings to complete his hat-trick. All with deliveries spinning out of the rough ably targeted by this king of spin.

The Durban man was also instrumental in cleaning up the tail as he induced false shots from Kemar Roach and the last man standing Jayden Seales going on take a fifer for the innings and soaring to a total of seven for the match.

As was he case in the first test, The Windies batters again failed to apply themselves chasing a daunting yet achievable target of 324 for victory.

A meek surrender was all we got much like the first test as the men from the Caribbean were again skittled out for a paltry 165 to match their absence of application even in their first innings score of 149.

In truth, what was even more shocking for me as someone who is an admirer of West Indies cricket was the team in all of the four innings couldn’t muster a score of 200 in any.

A performance akin to a man swimming aimlessly in an ocean with no land in sight!

This too, against a team who were ranked lower than the West Indies at the onset of this series.

Having said this, credit must be given to the quicks in Rabada, Nortje and Nigidi who were mightily impressive again in this second test soaring to a combined tally of 27 wickets between them albeit the cherry on the cake was the spectacular bowling performance by young all-rounder Wiaan Mulder who grabbed 3 wickets for just 1 run to finish the Windies tail in the first innings.

To make any performance complete, the batters also need to come to the party and when we talk about the South African batting, Quinton de Kock was the star mounting a 90 odd in this test to complement the hundred in his last outing.

Certainly, being unburdened with captaincy has seen him burdening the West Indies with runs galore.

Moreover, he was ably supported by a 77 from Elgar in the first innings and van der Dussen with his 75 in the second.

A more than decisive showing by The Proteas with a 2-0 victory under new and inspirational leader Dean Elgar.

A leaf that limited overs captain, Temba Bavuma can take from Dean’s book and guide the Proteas to even greater heights.

As this tour now proceeds to its second leg with the T20 series, nothing less than winning that five-match contest will suffice and then and only then as a Protea purist, I can truly say our tour was complete. 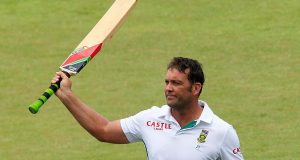 Jack Kallis Finally Inducted Into The Hall Of Fame! Thank You...

Dev Tyagi - August 23, 2020
0
On a normal day out in the field, there are pats on the back offered for really different reasons. Usually, the biggest applause is...