On August 22, 2004, a young English quickie was spotted steaming in hard at the White Ferns’ middle-order. On a moist North Marine Road Ground pitch, the ball was doing the talking. Though one youngster, in particular, was keen to make it talk all the more.

In an English line-up comprising greats- Jenny Gunn, Isa Guha, and Clare Connor- the focus keenly rested on a zesty right-arm pacer who rushed hard at Rebecca Rolls, the bedrock of the Kiwi batting, no slouch with the bat with over 2,200 ODI runs, including two centuries.

A raspy-quick delivery pitched fuller and straighter would catch the right-hander plumb in front. But was special about the dismissal? Not just the fact that the-then 29-year-old was sent packing by a talent much younger, aged 21.

Rather, the fiery pacer had got the wicket of the White Ferns’ highest-scorer, Rolls returning for 71.

The mode of celebration, which casts this cricketer in distinct light, featured a fist-pumping celebration exuding an almost energetic spiritual relief of the kinds we’ve come to associate with one of Bruce Lee’s exasperating Jeet Kune Do move.

In the next inning, the right-armer would send the stumps of Maria Fahey, the dogged left-hander, cartwheeling.

A talent had shone brightly upon her Test debut. And Katherine Brunt had announced herself in the highest annals of Cricket.

In a contest that’s quick to make and break fortunes, prompting one to readjust techniques and often undergo a complete overhaul in the craft, Katherine Brunt has remained in a state of unflinching, unchanged perpetuity, sans many changes.

Nearly seventeen years later from that famous Scarborough Test, Brunt was seen steaming in hard once again, playing what was just her twelfth Test given how little are women made to play cricket’s foremost template.

Though, nothing about her had changed despite enduring a period of well over a decade and a half at the highest level.

The long-run up. That gusto and infectious zeal that elevates England into a position of dominance. The rhythmic approach to the popping crease. All of it reminded us of the 21-year-old who burst onto the scene many moons ago, except the only change was that, the soon-to-be 36 was confronting a different presence at the crease, one several years younger and perhaps with quicker reflexes- Smriti Mandhana.

Though among India’s prominent first inning scorer, who’d spent 215 minutes at the crease in her first go with the bat was sent packing inside 22 minutes in this outing. Katherine Brunt had got the better of the most dangerous bat in the Indian line-up.

The flexing of the arms was evident, as was the fist pumping celebration and a little hop off the ground in suspended air.

Nothing had changed, you see.

Except, however, that over the course of a decade and a half long stint, which is continuing minus any hiccups as such, Katherine Brunt has gone on to amass 291 international wickets.

No other bowler in her side, whether an exponent of spin or a worshipper of pace has collected as many wickets.

What’s most remarkable, however, is that one of England’s all-time greats rises to the occasion when confronted by adversity.

Take the high-octane Women’s World T20 final, 2009. Not many would’ve anticipated a line-up featuring a quartet of greats, comprising Bates, Devine, Satterthwaite, Watkins to be dismissed for 85 in a world cup final.

There was little, however, that the White Ferns could do finding themselves bull-dozed to the ground for Katherine Brunt was in her element.

Sending the trio of Doolan, Watkins, and Priest back, the trio making no further than sixteen among themselves, the English quickie was at her rattling best, lording headlines at the Lord’s.

In a format where every dot ball is a prized achievement, Katherine Brunt bowled 2 maiden overs, finishing a devastating spell of 4 overs- 6 runs- 3 wickets, at an eye-popping economy of 1.5.

All of this, in a format fancied for lusty hits out of the ground, many of which have broken window panes of cars in the parking lot.

Not once did the then 24-year-old seem one bit perturbed despite sporting a black eye, having been stuck by a delivery from Jenny Gunn during the pre-match practice.

Regardless of format, Katherine Brunt knows how to excel the moment you throw the ball into the hands of Barnsley’s greatest export to women’s cricket.

With her skiddy action and the ability to hit the deck hard, over the years, Brunt has proven to be the undoing of mega stars, be it Stafanie Taylor, Mithali Raj, Harmanpreet Kaur, Alyssa Healy or Sophie Devine.

Together in a three-pronged English pace attack where Sciver produces long and consistent spells, and Shrubsole brings in the element of swing and variations, the great Katherine Brunt plays the wrecker-in-chief aligning speed with accuracy in a lethal way.

In the 2017 ODI world cup, she single-handedly destroyed Pakistan, removing Nahida and Javeria Khan on her own, the duo managing just fourteen collectively.

And after drying up the runs for Sri Lanka in her team’s next game, where she emerged the most economical bowler (2.5 eco, 10 overs), she continued to suffocate batters in the next game, as if applying asphyxia to the Proteas women during her wicketless spell, albeit one that produced just 25 runs off 10 overs, bowling once again, the most overs for her side.

Four days later, Brunt produced the most stellar display of the World Cup, a performance at par with Harmanpreet’s definitive 171 (vs Aus), as she reserved her best for the game’s most ominous opponent- Australia.

A 45 that came off 43 was just indication of her freewheeling batter whose big shots can get the measure of any ground. Though, in removing the great Ellyse Perry and the dangerous Alex Blackwell, the English quick truly ruptured a star-studded batting line-up that bowed down to Katherine Brunt in a fashion in which the empire of Russia might have bowed to Catherine, the Great back in the 1770s.

Her stock delivery isn’t the nagging bouncer, but the one that forces batters to offer a shot around the middle and off, the victims in front of the stumps coaxed into flirting with deliveries they’d be better off leaving.

Moreover, her menacing, very “Sparctacus-like” presence in the ground silently taunts the willow-wielders always provides England with a steely edge to rub their opponents as if they’re toying with a prey who’s bound to be hunted.

Though what’s truly remarkable about Katherine Brunt- someone with 229 international appearances against her name- is a facet more captivating than her bowling arsenal.

For someone subjected to bullying, taunted in her adolescent years about her weight, that Brunt has emerged as a tireless athlete in the game that tests one rigorously is a testimony not just to the age-old virtue called resilience, but a fitting reminder that if we stick to what we truly love- playing Cricket for England in her case- then just about anything is possible.

Speaking of which, may the best only happen to the one who exemplifies just what it means to ‘Never Say Die!’ 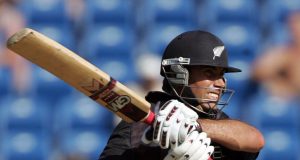 Saluting Stephen Fleming: Not Just A Leader, A Bat Of Compassion,...

Abhishek Srivastava - April 1, 2020
0
Few people are born to lead. In that aspect, Stephen Fleming, arguably one of the greatest captains was one such personality. He was a...