If you are aware of who Victor Trumper was, if you know Alec Bedser’s identical twin took to spin while the former aced medium pace, if you’ve been aware of the fact that Indians supported Sir Don and his Australian team in its Ashes rivalry versus England and are someone who knows things like the Women’s World Cup was held before the first men’s 50-over World Cup came to exist- then sorry, you’re no good.

Your knowledge is invaluable.

Moreover, if you find yourself biting nails intrepidly even when watching domestic or club contests that are seldom televised or happened to have wept when Belinda Clarke called it a day or shed tears of joy when Mithali overtook Ms Edwards’ for most international runs scored in cricket- then you probably have wasted all your time.

You should’ve known how much money does Virat Kohli make, on an yearly basis, from brand endorsements. You were much better of knowing what gel does Kane Williamson apply on facial hair. What were you even doing when Smriti Mandhana last posted an Insta reel and just where were you when Jemimah Rodrigues did her recent dance move?

The purist be damned and may all of his discerning knowledge be ignored like famished Yemenite kids who are turned a blind eye to by the so-called charities who know that most of those kids are severely malnourished.

May one thing and only one thing prevail on planet earth comprising of cricket- the real sporting Aphrodite: consumption of garbage journalism that can turn a fluid bowel movement into a state of perpetual constipation.

What on god’s mighty earth is your utility in knowing that Sangakkara fired more double tons in Tests than Brian Lara himself or that Mithali Raj’s real intent was to head toward Bharatnatyam?

Why didn’t you memorise the color of mat papa Kohli and mommy Anushka used in baby Vamika’s bedroom?

Why do you know which part of Haryana Chahal hails from but know nothing about the latest hip-hop number he assassinated, sorry danced to?

Is there a bloody point to your cricketing existence if you didn’t know that India’s famous and perhaps hottest couple – Virat and Anushka were both wearing the same colour black whilst shooting a meaningful video in which daughter Vamika’s floor mat made an appearance.

Why have you- when all this profoundly informative cricket knowledge been available at the mere click of a button- been chasing facts like no Lara and Sachin have scored a Lord’s ton ever whilst a Dravid and Chanderpaul have?

Haven’t you heard that amassing useful knowledge will actually do you harm? That it may just downsize your cricketing quotient to the size of a raisin whilst castigating valuable stuff that Ravindra Jadeja breeds horses in his farm at native Gujarat (none of which have thus far made it to Ferrari’s Maranello-hometown) will do emotional damage?

Shame on you for concerning yourself with the much necessary information when you could simply have been the so-dumb sorry Sonam Kapoor of cricket trivia.

Why didn’t you memorise the dance steps of Katrina Kaif’s RCB video in the franchise’s opening season when you can, almost blindfolded, mimic Shane Warne’s action and know every tiny statistic surrounding the “ball of the century!”

Well, balls to you. You should be way more interested in intellectual matters like Mrs. Virat Kohli consulted Sonam Kapoor whilst in London, last month, to get a suitable hairstylist.

And here you are, whiling away time in discussing meaningless discussions as to whether VVS Laxman ever got his due or if the Indian team would’ve sported a different dynamic had Amol Mazumdar played even a single game.

Truth be told, o dear spender of countless hours over social media trolling, dear outstanding memer, you’re letting yourself down; concern yourself with the dumb dim witted and flush out your actual cricketing trivia that resembles a big fat Biblical Old Testament.

What are you even living for? Go, get a life. 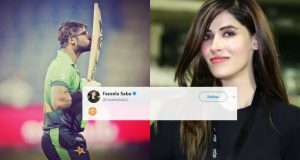