Karma dictates you do not say a bad word once a person is gone. For what remains behind are his deeds. True for cricket, just as true for all aspects of life. But then don’t we offer critique on the living when they commit something like a fool’s errand, a grievous mistake? It could be a talent involved in spot fixing. It could be a man repeatedly involved in ball-tempering. Though without running into the philosophical debate of what’s good or bad, as Cricket fans we must side with facts and offer analysis for offering judgement would make us some spiritual arbiter, which we clearly aren’t. Fact is Runako Morton, who was born this day, fourty-four years back in Nevis, St Kitts was no Chris Gayle or Shivnarine Chanderpaul.

He could neither touch 2,000 ODI runs, nor did Runako Morton hit 5 centuries, for him or his career to be taken seriously.

In his youth, circa 2001, Runako Morton was dismissed from a cricket academy. That too, the West Indies Cricket Academy. He was known to be temperamental individual. Want more?

Three years later, after his expulsion from an academy, which he should’ve taken to akin to a disciple takes to the temple, he was involved in a scary nearly career-sabotaging stabbing incident.

In the very year where Brian Lara regrouped with his inner beast and fired Cricket’s first and thus far, only quadruple hundred, bringing much joy to the Caribbean, Runako Morton, then described as a troubled young cricketer, was arrested for inflicting a stab onto his own cousin’s chest.

Very poor for a cricketer who endeavoured to represent the West Indies.

Funnily though, by this time he’d already made his ODI debut, around two years before.

But being true to inherent strangeness, Runako Morton, in the subsequent months that followed, performed like a shining star in the Busta Cup, in the domestic season.

And the next thing one noted was that he was called upon to make his international Test debut, which too occurred in the same month he was born- July, against Sri Lanka.

Yet, not much is spoken about the little spurts of positivity that the Kittitian.

In his maiden Test outing, he stood at the wicket for nearly two hours and scored 43 solid runs facing Vaas and Murali.

Though what made Runako Morton a truly unpredictable willow-wielder was that you just never knew what he’d do the next time around.

In the first Test’s second inning, he failed to collect a run.

At times, one felt that the West Indies Cricket Board was too casual or complacent about blooding talent that perhaps never had it in it to go a long way or probably the board was rather large-hearted to ignore certain errands that to most others, would’ve seemed unpardonable.

In 2002, when there came an opportunity to play in the Champion’s Trophy, he pulled away from the series citing a cold-blooded lie, stating falsely that his grandmother had expired.

In an era where West Indies, closer to hitting rock bottom, still had fighters in Gayle, Sarwan, Chanderpaul, Lara, and Dillon, Runako Morton preferred to flirt with risk instead of evading it to build a solid career.

Technically speaking, there wasn’t much untoward in the right-hander’s game. He boasted a solid backfoot defence and could play the cut and sweep without much trouble.

Not a giant slayer of bowlers, if for anything, he was a patient batsman who had some good strokes to carve a meaningful career.

His ODI strike rate of 66.3 needed some working and there were occasions where Runako Morton would test the patience of the fans more than that of his opponents.

For example the 2005 ODI series against Pakistan, where a vital fifty resulting in 55 runs came of 98 deliveries.

He just didn’t have answers to Razzaq or Afridi, and yet somehow ended up with 85 runs from 3 outings. Not too dismissive for a man who was then playing just the second ODI series of his career.

In Test cricket, however, he was a different person, altogether.

What was present often on the pitch, though not in real life was temperament, if only in spurts, and on occasions where partnership building was key.

The dainty accumulation of 573 runs wouldn’t offer anything to pick from but where one can draw some sense was that from 15 innings, he fired 4 fifties, at an average of one in every four outings with the bat.

Would you call it terrible?

One of his finest hits came in the Indian Oil Cup. Facing a Nehra and Pathan powered attack, he hit what would then be his best ODI score of 84 of just 104 deliveries. Moreover, he took a team minus Chanderpaul, Gayle, Lara or Sarwan achingly close to upsetting an India powered by Ganguly, Dravid, Laxman, Sehwag and Kaif.

Interestingly, in the game prior to this held at the Premadasa, in Colombo, he had made just 1.

This, in essence, was Runako Morton. Champion one day, hopeless the other.

Had he not possessed talent, he wouldn’t have gone onto carve 10 ODI fifties from just 50 outings. Not to forget, two centuries, with a career-best 110.

His maiden century, something that pleased even his staunchest critics, came in New Zealand and against a Vettori, Mills, Bond-powered attack. He was the one who ensured the Windies crossed, at least, a 230-run mark, in a wild goose chase of 325.

For a batsman who represented the West Indies from 2002-10, Runako Morton’s strongest years were 2005-2007. Way before the law of averages for batsmen began favouring inflated numbers like 50 or 60 per calendar year, Morton fared well during this period scoring at averages of 35, 37.

But like short-temper, inconsistency was his other great undoing.

After averaging 18 with the bat in 2008, he suddenly, true to his unpredictable nature, plundered 182 ODI runs from just five innings, wherein he remained unbeaten in two, scoring at an average north of 60.

In June of 2009, he hammered India at Sabina Park for an unbeaten crafty 85 (102), outscoring even Gayle to take his team over the line in Chris Gayle-territory.

What he did and how he did it was testimony to his passion for the game.

Why he didn’t succeed or go the long way was perhaps down to his lack of concentration and deviation from the sport into the realm of notoriety, which had long plagued a promising career.

The end, sad, to say the least, didn’t come on the cricket pitch, with Morton couldn’t really make his home away from home.

Losing control of his car, in a road accident in Trinidad, circa March, 2012, Runako Morton, quite like self-harming his career, time and again, rendered for real a fatal blow, one from which he’d never recover.

And thus, the end came at 33, an age where he was still going strong having demonstrated enough potential as also areas of improvement, which had he lived long enough could well have birthed a career that would’ve made a West Indies sojourn, so often in turmoil, a bearable journey.

As they say, it’s all down to Karma. None harmed Runako Morton but destiny. Some are eternally loved by the powers that be, you ought to think, while some aren’t exactly destiny’s child. 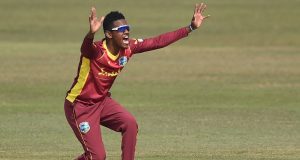 How Akeal Hosein Can Spin It Big In His Career?