Recently I came across the groupings for the upcoming ICC World T20 and truth be told to see England, Australia, South Africa and reigning champions West Indies in the same group vis-à-vis India, Pakistan, New Zealand and Afghanistan in the other was a tough pill to swallow.

Its obvious that the former group is way more lethal in terms of competition albeit if you’re the quintessential Indian fan you will beg to differ which normally is the case.

Having said this, does a group of death if we can call the one in question that, really have an effect on England to make it to the semi-final?

As a keen admirer of their resurgence in the limited over setup post the debacle of the ill-fated 2015 World Cup, I surely would think not!

Such has been the dominance of the Pommies since the 2015 showpiece, under a leader par excellence in Eoin Morgan with a record of winning 46 limited overs matches of the 69 contested, boasting a win percentage of 66.67, the highest for any cricket playing nation.

And the record just keeps soaring with the one term that defines their cricket – Fearless.

Fearlessness with the perfect blend of ruthless aggression is the English motto of breeding talent across levels that lays the foundation to a perfect winning recipe in international cricket.

Simply awesome to say the least!

Ask the touring Pakistan side and they will whole-heartedly agree as they suffered a 3-0 whitewash in the ODI series to a Ben Stokes led inexperienced side and 2-1 in the recently concluded T20I series to a more familiar looking Eoin Morgan’s chargers.

Make no mistake, the current outfit of Pakistan is as strong as any in world cricket, boasting the likes of one of the best limited overs batter and their captain in Babar Azam, his deputy and a man of purpose in Mohammad Rizwan, the dasher in Fakhar Zaman and the bowler who slowly but surely is becoming one of the best in the world in Shaheen Afridi among others who if I may add are also equally capable.

A team that recently slaughtered the Proteas in the T20 leg in their own den with a dominating 3-1 score line.

Perhaps to see the Men in Green capitulate the way they did especially in the ODI series to an English side who barring Ben Stokes had no member as a regular in their ODI setup was a tad bit surprising.

And the confidence showed, as a more recognisable English outfit subsequently conquered the sub-continent side in the T20I series too.

The standout for me in the ODI leg for the Pommies was speedster Saqib Mahmood, a bowler who bagged nine wickets in the three matches with his astute line and length matched with healthy pace earning him the rightful title of the Player of the Series.

When it came to their batting, a certain James Vince was the showstopper having amassed 158 runs in the three matches at a whopping strike rate of 107.48 with a maiden century to his name.

Such has been the self-assurance of England’s second brigade which expectedly rubbed off on the T20 excursion as Liam Livingstone, another young aggressive batter roared with a mouth-watering 103 of just 43 balls albeit in a losing cause in the first T20I.

Despite going down in the opener, England mounted a strong comeback winning the next two, comfortably defending a total of 200 in the second T20I and chasing 155 albeit in a closely fought contest in the third outing.

Speaking about Livingstone, his monstrous six in the second T20 was timing and power at its best as it rocketed straight out of Headingly. So massive was the strike that even the distance measuring machine was at sixes and sevens to put a figure on the effort.

With feats like these, one has to be impressed with the raw talent that England has at its disposal and match that with experience, a winning combination is there for all to see.

This team made the finals of the 2016 T20 World Cup only to be outdone by ‘Remember the Name’ Carlos Brathwaite when he sprung the sixes galore surprise in the last over.

Having said this, the Pommies did come on top in the 2019 edition of the ODI World Cup and in truth I see no reason why the UAE edition this year will not be a typical Sunday roast.

After all, the Euro disappointment of loosing one trophy has to be avenged by winning another and rightfully so in the same year too! 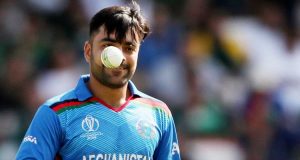 Why It Makes Great Sense To Have Rashid Khan Lead Afghanistan?

Shruti Banerjee - July 14, 2019
0
Rashid Khan, the name is quite popular in the cricketing world, for the bowling style, leg-break googly and for personifying the passion with which...