The extra-cover to a right hander is a mid-wicket to a left hander. If right-hander, Hemant Kanitkar    hit sixes over extra cover on demand, then left-hander Hrishikesh, his son, hit the most valuable stroke through mid-wicket. The Kanitkars owned their respective regions.

It was January 18, 1998. The lights were on at the Bangabandhu National Stadium in Dhaka as the Silver Jubilee Independence Cup’s winner was to be decided. The tournament was organised to celebrate Bangladesh’s 25 years of Independence. Guess who were the finalists? India and Pakistan.

It needs no mention of what it meant for both the teams. It was, as it is always, a win-at-any-cost match. It was the third final (best of three). Pakistan set a target of 314 in a 48-over match. Of which, 257 runs were scored by Saeed Anwar and Ijaz Ahmed. Against the formidable bowling attack India needed to start and accelerate well, which they did. Their top three: Sachin Tendulkar, Sourav Ganguly and Robin Singh made India believe that a chase of over 300 was possible.

The middle-order perished but India did not surrender. The tension was high. It was down to the wire. Pakistan needed to defend 9 runs from 6 balls. To bowl those half-a-dozen deciding ones, Saqlain Mushtaq, one of Pakistan’s premier spinners, was handed the ball.

Javagal Srinath and Hrishikesh Kanitkar were in the middle. While the left-hander took his guard, Mushtaq made changes to the field, at the non-striker’s end Srinath swung imaginary lofted strokes with his Four Square stickered bat. Srinath was without a helmet. When a single brought him on strike, he tried to implement what he had just practiced. The fast bowler hoicked two consecutive spinning deliveries in the air, twice the ball landed in no man’s land, and twice India ran twos. Much to the delight of the Indian supporters, Srinath then passed the strike to Kanitkar.

India now needed 3 in 2. The batting pair had a quick chat, so did Saqlain and his skipper Rashid Latif. The spinner released his lethal weapon, the doosra. And Kanitkar slog swept it, firmly and precisely, for four. India had won the Independence Cup.

India had chased the mammoth target. And it was just the third ODI for the 23-year-old. Kanitkar represented India in ODIs 31 more times. And both father and son played two Test matches for India.

Kanitkar is remembered for this winning shot but he has done so much more on the cricket field. He was a handy off spinner and a superb fielder as well, a pity that he could not make a mark. After his short-stint — 1997 to 2000 — for India, he did exceptionally well in the domestic circuit.

Playing Ranji Trophy for Rajasthan, Madhya Pradesh and Maharashtra, Kanitkar amassed over 8000 runs and scored 28 hundreds in the tournament. The left-hander led Rajasthan to successive Ranji titles. In 2015, he hung his boots as a player and turned a coach.

Kanitkar is known for conducting the Board of Control for Cricket in India’s (BCCI) Under-19 regional East Zone Camp. Soon, he had a stint with the Mahendra Singh Dhoni-led Rising Pune Supergiants (RPS) as an assistant fielding coach.

In May this year, Hrishikesh Kanitkar applied for India women’s head coach job for he had worn the coach’s hat in the Ranji Trophy for Tamil Nadu and also for National Cricket Academy. It did not come his way, but Kanitkar keeps getting better by attending various coaching workshops and courses at NCA.

If we remember Hrishikesh Kanitkar for just that boundary, we must also remember him for his exploits in domestic cricket. He was a stalwart. And if the 46-year-old earns badges wearing the coach’s hat, who knows, he can make players win titles, that he so wanted to, as a player. 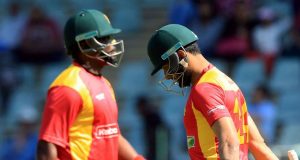 What’s The Way Forward For Zimbabwe?

Abhishek Vedpathak - August 10, 2018
2
It seemed like just another day under the scorching sun at Sharjah in mid-November of 1998. Zimbabwe batted first and posted a mediocre 205/7, which...