A powerful side with all star players can go a long way to create a difference. But does that mean a side minus Finch, Warner, Cummins and Smith cannot even put up a fight?

The socio-political repercussions of Covid-19 have been striking in so many ways. The sight of Cricketers giving their best in empty stadiums is just a small figment of the ‘new normal’. But, Australia’s struggle against spin is not a novel thing anymore.

Australia’s defeat in T20s against India in India’s last tour had also raised concerns about Australia’s batting in the middle overs and the ability to contain opposition during the death overs.

Little has changed since then.

In the recently concluded twin tours of West Indies and Bangladesh, only Dan Christian batted at a strike rate over 130. No other top order batsman batted with an acceptable strike rate. The shifting of ICC T20 World Cup to the UAE doesn’t augur too well for a batting line up which is still dependent on Warner, Smith and Maxwell. Though, Mitchell Marsh has made a successful comeback into Australia’s T20 team but his susceptibility to get injured would make Australia nervous.

Interestingly, Australia seems to be the only team which is still dependent on its proven Test bowlers like Starc and Hazlewood to carry the weight of expectations even in the T20 format. The woes of Australia don’t end even there. In numerous  occasions , Australian spinners were  unsuccessful in making an impression even on spin friendly tracks in Dhaka, conceding more than 120 runs too often which were akin to 190 runs on docile wickets. Though, Mahmudullah, the Bangladesh captain conceded that the conditions were extreme in Dhaka but still Australia has a lot of thinking to do.

Unfortunately, apart from Matthew Wade, Mitchell Marsh and Moises Henriques, no one else was able to score runs freely against the likes of Hayden Walsh Jr. and Shakib Al Hasan in the twin tours to West Indies and Bangladesh. Even, Aaron Finch looked ill at ease against some steady spin bowling.

Australia’s victory in the 50 over format in West Indies does little to conceal the blatant chinks in their armour. Accidentally, Australia’s recent poor T20 record has also made oppositions confident of spinning a web against them in the upcoming T20 World Cup. Even though, Australia’s batting will be bolstered by the return of Warner and Smith, but they have some serious considerations before the marquee tournament kicks off in October.

The series of 8 defeats out of 10 completed T20’s has certainly raised doubts about the preparation of Australia and they need to find out the ideal resources that could be expected to perform in difficult Asian conditions.

Josh Hazlewood and Starc enjoyed enough game time to ensure their selection in the squad for the World Cup. Adam Zampa held his own against powerful hitters in West Indies and Ashton Agar was steady if not outstanding and has almost sealed his spot for the World Cup. Australia would be hoping for consistent performances from the duo in helpful conditions at Dubai, Sharjah and Abu Dhabi.

Justin Langer must have been hoping for some encouraging performances to unsettle the proven performers. Though, it has not worked out that way but he would be hoping to find the best team combination ahead of the World Cup where they won’t be participating as the favourites.

It may just give Australia the freedom to perform at their optimum level. 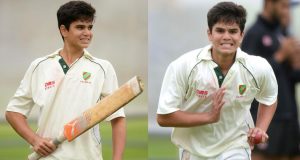 The Life And Challenge Of Being The Other Tendulkar: Arjun Tendulkar