I was there when The Prince turned a King and made 375,

I saw Sir Sobers hug the man-of-the-moment who had turned the tide,

I was there often alongside the man they called ‘King,’

With Hooper forming partnerships was more than just a special feeling,

I stitched stands with Ronnie… Sarwan, in case, you didn’t know

I stood at an end, often witnessing Lara‘s craft, Hooper’s elan and the Jimmy Adams show,

I also stood, at times, seeing our fortress falling down,

With crowds chanting slogans, not in appreciation, but in despair seeing us as clowns,

I was there when Trinidad’s lord plundered 400 unbeaten runs,

Though not on the pitch, watching it from the sidelines, I often wonder that must’ve been some fun,

I was a first-hand witness to demolitions, with often Murali and Vaas, Wasim and Waqar running us down,

But truth be told, I keep fighting, and fighting often lone vigils, minus a sign of frown,

I say so with not a shred of arrogance but utter humility,

For to give my utter best for the West Indies was, above anything, my joy, my duty,

To have been shown the exit door when I often sacrificed sleep, hunger, everything for this great side,

One that was battling days that were anything but great,

Yet, after all this time, and this was a span of 22 long years,

After facing no less than 39,803 deliveries,

What hurts- at times- is that there’s not even a will,

The one who never got miffed batting session after session, got used to facing the normal drill,

Of standing between victory and defeat for his West Indies,

Of often doing the unthinkable- like that 69-ball-100- against the Aussies,

The one who took body blows from everyone, whether Lee or McGrath

Yet being the one whom one may not have immediately run for an autograph,

For I knew I lacked the flair and elan of Lara,

But it was fine for in the others’ success, I sought mine,

Just like how everyone rejoiced when I conquered Lord’s through a ton, on a pitch that was a goldmine,

Not for us batters though, but certainly for bowlers

In my world, there were less sunny days and more thorns in the path

Walking on which I solidified my craft

And truth be told, what doesn’t matter for me are the 20,645 international runs,

For what actually does, are the circumstances fighting which I made all those runs,

Often as an opener, often in the lower-middle order,

Whatever the situation, wherever we might be in a game, serving WI gave pleasure… didn’t think of it as an Order

Memories there have been many, some bright, some not so much, some memorable,

Like hitting my maiden ODI fifty in a World Cup that too against the Proteas stable,

Yet, it didn’t matter that even that day in India, circa 1996, belonged to Brian,

For there are some, who willingly retreat to the back, letting others take the stage,

Though must it also be said, they are those who can be a lion when uncaged yet simple like a sage

I was a bit of both, in that I never said a word or two

Didn’t quite know the meaning of the word rebuke,

Never found the need to sledge,

But when the Australians attacked our dignity in 2003, there arose the West Indies putting them on the edge,

Forget not that it’s not 400 not out that only matters, for what also does, lest it is forgotten, is that 418,

More than a giant individual record, the collective victory of the team

Though I have no grudges, really none whatsoever,

I must also admit, I miss being out there in the middle,

To savour the challenge the 22 yards unfurled

Whether amid humid sun or the light as cotton drizzle,

I only have one message- to the Lewis’, Hopes, Mayers, Bonners, Holders and Hetmyers,

That do not spend precious minutes on giving back to those who direct toward you their ire,

Save your energy, contain the excitement, release it all to empower the West Indies,

For contributing to the team is the one and only way to attain true victories.

I, Shivnarine Chanderpaul, gave it all,

Tomorrow, they may forget me, I anyways lacked the style and appeal,

Though not the zeal to stand tall for the West Indies.

It was a pleasure for Pranay Rangra and Dev Tyagi to share thoughts on Shivnarine Chanderpaul in a Caught At Point exclusive on the great Guyanese! 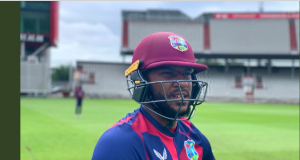