At 76, you are no spring chicken. Your best days, it may not be wrong to say, have already been seen and lived. You want to be adrift from the trappings of the busy and noisy world, want to sit back at home, relax, watch TV, eat your favourite meal and basically, see your grandkids play in your lap. Your greatest source of joy at an age where many start to forget things (and have to be often reminded about some important family member’s birth date or another’s marriage anniversary), is to seek simple pleasures of life.

For instance, a cup of lemon tea. Just watching the clouds gather and the rainfall from the bay window. Yet, here was a man who did nothing of that sort and was on the cricket field. To Michael Hyles, who is no more with us, it was the 22 yards and the cricket field that signalled the fuzzy comfort of a home, an actual place to belong outside of the ‘homely setting.’

That Mr. Michael Hyles is no more amid us, the figure who many a youngster in Guyana would rush to for cricketing tips and advice, plenty of which he’d offer with customary grace and warmth is a shocker that no respite in the world can sideline.

For someone who could’ve retired and taken ‘things easy,’ what was astounding about the late Michael Hyles was that he was in supremely sound physical health and his cerebral powers bellied his age.

Not the one who would duck under sophisticated cricketing parlance, someone who’d often use colorful language to have this thoughts be heard and shared by a wider cricketing community, Michael Hyle’s passing isn’t just a loss for Guyana; it is a sad loss for the entirety of Cricket West Indies.

Modern conception of life measures success through accumulation of wealth and access to trappings of a luxurious world. Though, blessed are those who dedicate an entire life to the service of development of sport- the harbinger o of change, a creator of communities, a common language one speaks despite hailing from multi-cultural and vivid backgrounds.

The greatest earning, in that regard, of Michael Hyles’s life was that he helped develop that very sport in Guyana that birthed timeless legends in West Indies and eventually, world cricket. Think- Roy Fredericks, Lance Gibbs, Shiv Chanderpaul, Carl Hooper, Roger Harper, and Ramnaresh Sarwan.

In his days, a talented off-spinner known for a penchant to keep a tight lid on the scoring, one of Berbice’s most renowned sons, who’d later be recognised in the entirety of Guyana, Michael Hyles trained and mentored countless youths, one of which is former West Indies batsman Leon Johnson.

A closely-knit member of several Under-15 talents from Guyana, Michael Hyles was regarded as the Guru whose sound expertise on developing one’s cricketing craft didn’t merely concern the technical nuances of the game; for he was concerned about the mental and emotional well-being of his pupil.

A rare trait, don’t you think, in an age where the world is largely going the insular way, turning inwards, distancing itself ever so much from the well-being of the others?

Though the late Michael ‘Franco’ Hyles’s life, a precious one, in that it helped turn around several careers, found massive admiration from individuals who plied their trade in a similar role of coaching.

Perhaps, that’s why it’s little surprise that the man regarded as a ‘stalwart’ of Guyanese cricket is being sorely missed by the likes of coach Juliane Moore and noted personalities like Ryan Hercules, both of whom made no bones about admitting that the departed soul was a role-model figure.

Leon Johnson admitted, albeit with a sense of grief, “His contribution towards the development of the game as a former player, administrator and coach was remarkable. He was always eager to pass on his vast knowledge about coaching and inspired a new generation of coaches within Berbice and Guyana. I had the privilege of knowing Mr. Hyles, first as a player then as a coach both of which would have been significantly impacted by him. My condolences go out to his family at this time. May his soul Rest in Peace!”

Though the above said, what cast Michael Hyles in a different league weren’t the technical know-how alone that his craft was endowed with; that he initiated using great interpersonal skills several coaching clinics and programs to make players comfortable and express themselves in a sport ultimately mired in team-spirit defined his character and persona.

An avuncular presence, ever ready to mingle with the youngsters having no airs about his long career as a coach, Hyles would also always be remembered for inspiring a young generation of Guyanese Jaguars talents.

Someone who advocated spinners to be unafraid of ‘tossing it up’ even on flat decks to create a room to entrap batsmen, luring them into playing the false stroke, it was rare to find a gent possessing both- great interpersonal skills and a sharp tactical mind.

That’s just one of the reasons why one reckons that since the great son of Berbice is gone, there’ll be so many who’ll cry tears that can create a parallel river to the mighty Essequibbo!

Gone, but not forgotten- RIP Coach! 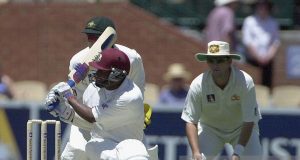 Prashant Banjare - July 10, 2021
0
If you think that the reason why Brian Lara, 'The Prince of Trinidad,' but the king of breaking enigmatic world records is hailed for...