Cricket is a gentleman’s game where the womenfolk have done many dazzling things. Seeking evidence? Why not. The first men’s world cup was held in 1975, but the women played theirs two years earlier. A big ODI record boastfully represented in bold headlines to promote the game- and why not- speaks of the highest-team total ever scored by a men’s team. Remember England’s 481 for 6 at Trent Bridge?

Though, little do we impassioned fans, enthusiastically participating in feminist debates, waxing lyrical all day about equality care to utter the stat that really matters. The fact that New Zealand women went 10 better than the Englishmen as they decimated Ireland women by scoring 491, and that too, in the very year the men were beating their chests endlessly about elevating the ODI game.

But year after year, series after series and across a long passage of time some particular women have done their best to make an under-represented template of cricket stand in the mainstream. One among them was a certain Betty Archdale, who truth be told, was and is an English national treasure.

To this day, there’s been an endless debate regarding who really played the sport first, a subject of discussion raising eyebrows and drying throats long before the T20Is came into existence.

It’s said that men did so, but evidence documented in Australia suggests that women had already began wielding the bat by as early as 1870.

But how far is this true can be ascertained a bit later. What’s important to note is that the one force of nature who made life a bit difficult for the Australians came from England and would make her name as the first-ever English Test captain.

Her name- Betty Archdale, her profession- a powerful hitter of the ball with a penchant to hit square of the wicket.

On the 22 yards, Betty Archdale was bold and fearless, confident and silent about the trait, not someone who resorted to a boisterously cheery attitude. Yet, someone who could only play no more than 5 Tests, with the chaos of the Second World War consuming a cricketing career that could’ve gone places, one that did albeit minus the cricketing attire and as an English life serving the war.

And while the global catastrophe sidelined a blossoming career that had quickly ascended into the leadership of a prominent national team having sparkled in domestic cricket, World War II did little to get in the way of Betty Archdale’s leadership of people.

A brave cricketer, an academic, an educationalist and importantly a member of a daring English family who served Her Majesty’s Empire in the nation’s first line of defense, Betty Archdale devoted her young life toward saving that of the others.

While many fans would loved to have seen the woman who led England to their debut tours to Australia and New Zealand march on and spread English cricket talent in different geographies, it was never meant to be.

Travel she did, but to the warring front where bullets flew and hand grenades felled constantly in heated exchanges from opposite ends.

By joining the revered WRNS, the Women’s Royal Navy Service, young Betty, who was just about 30 then, went her mother’s way, a daring woman who had died serving in WW1.

A well-rounded individual who was known for her penchant for cricket just as much for her keenness toward law, Betty Archdale even went to the Soviet Union to complete her academic studies prior to enrolling in the WRNS.

An excellent technician in the art of wireless telegraphy, the batter with a resourceful technique resorted to her talent for saving lives by helping British women escape the conflict during the peak of the Second World War.

For her bravery, which even sparkled in Singapore she earned the revered Order of the British Empire, proving forth the fact that not all cricketing careers reap rewards on the turf, some excel on the real pitch called life.

But it was something she did prior to being endeared to a nation that craved wartime heroes that really made Betty Archdale a one of a kind soul.

Someone who used her razor sharp legal mind to reform changes in certain spheres of the British Law, Betty Archdale first became the honorary chairman and secretary of a pertinent feminist group- Six Point Group.

Using her credibility and powers, she exercised change in a Bill that the British used to undermine women in India during the peak of their governance, or should one call it infamy?

Calling for immediate change that women should NOT be excluded from owning property on the basis of their sex, Betty Archdale advocated and supported, in bringing about change in an area not many were concerned about, yet carried so much meaning for tens of thousands of suppressed Indian women.

But it was after serving in the Far East that Betty settled in Australia where she got founded the Australian branch of the International Law Association. Not someone who could rest over success in a single discipline, she even became the headmistress of a Sydney school only for girls, where true to her revolutionary ways of thinking, that cared little for glass ceilings, she batted for another pertinent change.

This time for advocation of the idea of girls to be taught sex education. Abbotsleigh, can and has not forgotten the people’s headmistress to this day.

A giving, large-hearted person, who showed what it truly meant to be the epitome of a woman- a giving, compassionate person who never shied away from being a catalyst of change- just imagine all the great things Betty might not have been responsible for, had she only been stuck to the crease, being responsible for towering runs.

In the end, a distinctly short career that featured just 13 first-class games and a highest-score of 32 unbeaten runs and many memorable appearances for Kent proved valuable for contributing to shaping the intellectual mentation of everyday Australians.

Someone who was largely responsible for making young girls study physics by bringing it back to the school’s curriculum, it’s hardly ironic that Betty went on to ‘lead’ England, when she was the leader who brought about such massive changes in different walks of life.

Not every career is meant to take smashing wickets or hit double centuries. Yet only a few get to be remembered fondly even after a century has passed since one’s arrival. Isn’t it? 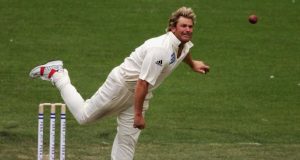 Shane Warne: The Spell Is Broken, The Magician Is Gone!

Abhishek Srivastava - March 5, 2022
0
Warne was not just a cricketer; he was emotion ready to flow, an anger ready to burst, a...