Once Cheteshwar Pujara walked into a restaurant and upon being offered the menu, took so much time to order that he ended up putting himself and his family under pressure. In the end, he was told to leave because it was closing time.

On another occasion, after waiting patiently in a never-ending queue, Cheteshwar Pujara, upon finally reaching the bank manager with a few forms to fill, was told to leave.

Because it was the end of the day and he’d taken too much time to open his account.

Of course, none of the above are true. But hey, habits die hard and spread into whatever we do.

Moreover, now that he’s compelling selectors to take a hard look at his seat, which he hardly leaves vacant since he’s not the guy who’d be out there batting one session after another, Cheteshwar Pujara could well be seen doing any of the above for real.

One suspects, that’s where things might get messy for the out-of-form bat.

After all, cricket is the only thing that Cheteshwar Pujara knows in life. The only thing he does well, sticks to, is obsessed about and can do for an entire lifetime. The other thing, of course, being hanging out on the Playstation though that’s something that won’t look too pretty on the resume of a 33-year-old who’s sitting over 6,300 Test runs and 18 hundreds.

He resembles that aspect of the balance sheet which is called a liability. Too harsh? Apologies.

How about a non-performing asset?

Any 11th grader in Indian school would look at him and be instantly reminded of the golden rule of accountancy- “Debit what comes in, credit what goes out.”

Cheteshwar Pujara, if no more runs come in the next inning, should be credited for stepping down, i.e., going out.

For nothing’s quite happening him being in.

As they say, it’s better to leave before you are asked to. And the way things are going, it’s no rocket science to note that Cheteshwar Pujara has overstayed his welcome.

How has he not? How can you beat the prudent, rational-thinking Indian fan in this logic.

Take a look at some reactions on the Twitter eco-system after Pujara returned to warm the bench after 6 deliveries at Leed’s:

Check this as well!

And this one, too!

For someone who was once touted to be the next ‘Wall,’ Cheteshwar Pujara has taught the classic Test match fan, one habitual of being emotional, known for his penchant for comparisons, a lesson.

And it’s that some become walls, whilst the others a dead end.

It’s painful to even write this about a batsman who, from the onset of 2013-18, which is a period not less than half a decade, proved himself worthy of immense respect.

He was the savior of India at the Ranchi Test against the Aussies. The scorer of a 525-ball-202. The great partnership maker with Saha.

He was the sole reason India beat Australia in Australia, circa 2018. The man behind 521 runs in a series that had- not lacked- Virat Kohli.

He was elevated to a different pedestal of respect- which was fair and just- when he took countless body blows but didn’t budge even under extreme pressure, on way to a heroic and defiant Gabba fifty.

Yet here he is- a man appearing lost, seemingly confused about how to read swing, flustered unendingly by a man approaching 40, one who’s made Pujara a bunny, albeit one whose string of low-scores are funnier than the cartoon called Bunny- Buggs.

That the topic of Pujara now has started bugging people- whether or not he’ll make runs, when will a big score come- is every bit as frustrating as expecting a turnaround in West Indian cricket.

Who knows when might that happen or if it’ll happen, at all?

Truth is, there’s only one solution to the Cheteshwar Pujara conundrum; why a great Test match batsman is suffering so horrendously?

It’s that Pujara has to make runs. The problem is, he’s not making any. No one has stopped him from doing so. Joe Root hasn’t threatened him with an assault jointly orchestrated with Britain’s MI 6, in the case of the Rajkot-born making runs.

His passport, driving license, Aadhaar Card.. none of them will get cancelled if he makes runs. Nor will Cheteshwar Pujara be forced to enter the Big Boss villa against his wish, and certainly won’t be forced into a wardrobe exchange with Ranveer Singh.

Why then he’s not making runs, despite being fully aware it’s a question now of his career’s survival-not growth- is beyond everyone. A mystery not even Sherlock can solve nor Mossad can investigate.

What’s known is that Pujara is taking too much time at getting on with his innings. This doesn’t help in two ways:

If you were to score big holding on to an end, then it makes life easier for the one at the other end. But if you are somehow surviving- not scoring, not ticking the scorecard along- then it shifts the burden of scoring onto the other end, where one may or may not be on song.

Any 5th grader would understand that, yet, Pujara isn’t.

And if he cannot handle himself at this level, where he’d be subjected to vicious bouncers, inswinging yorkers and the ones that always wish to kiss the off stump, why’s he even at this level?

This is India, let’s not forget. It’s a country that has a problem of plenty, not dearth of talent.

It’s not a country that has to fly in talents from South Africa or New Zealand to represent the playing eleven. There are several men vying for the exact spot which you’re holding up.

A few hours back, that none other than Brian Lara had to offer some advice to Pujara, was strange and sudden in equal measure.

First that Pujara would plausibly seem one of the least interesting batsmen to a Lara, who was more flamboyance than old-word doggedness.

And second that Lara’s often been more interested in following Kohli‘s career than his #3, who’s currently sucking at doing his job well.

Nevertheless, here’s what the ‘Prince‘ had to say- “Pujara should try and create a lot more shots!”

But Mr. Lara, that’s what the problem is- you are asking a man to moonwalk when he can barely put on his dancing shoes.

Where Pujara is right now, and it’s not a great place to be in- 71 runs from 5 innings- is the spot a Suryakumar Yadav may not really like . He represents a young India, a keener India, an India ready to take on the attack and turn the tables on the opposition.

And the issue is- where Pujara is, at present, no one else can be blamed for it, and mustn’t be. Moreover, where Pujara is right now is the place called the very edge; the spot beyond which comes the fall. The place of no return. Is he headed there? For if he is, and let’s not kid ourselves, it won’t be easy to return. 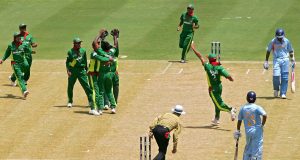 Vikrant Choubey - May 18, 2021
0
It is famously said, 'Cricket is a game of glorious uncertainties'. Whoever said that has to be a legend. And that's because the phrase...