The medieval charm of England can sometimes be a cruel façade that hides ruthlessness. The abundance of green surroundings can often lull one into a sense of false security in a socio-political sense. In terms of Cricket, English conditions are objects of dread especially for Asian countries. Countering the swinging ball has been the greatest challenge for touring batsmen for ages. India’s frail middle order is currently facing stern examination in England and is struggling to find answers against a potent bowling attack.

The vagaries of weather have a great bearing on the outcome of Test Matches in the UK. The ongoing Test Series between India and England has not been oblivious of the conditions that have been in offer. Apart from Joe Root, no other batsmen from both teams have been able to score big runs. Even the great Virat Kohli has been struggling to score consistently against an attack that is led by James Anderson and a menacing Ollie Robinson under helpful conditions. As India meekly capitulated to yet another batting collapse in the morning session of the third Test at Leeds, the shortcoming of the Indian batting order once again reared its head after India managed to score 78 and 278 in a good batting wicket.

Many Cricketing pundits have harped about the sameness in the Indian batting order. The cruelty of situation is aggravated even further when Cheteshwar Pujara and Ajinkya Rahane form the core of the middle order for India. Interestingly, Pujara’s knock of 91 in the second innings of the Headingley Test bordered around fluency, an epithet which he has not been worthy of over the last six months.

Similarly, Ajinkya Rahane’s efficacy as a solid Test batsman has unfortunately waned over the same epoch of time. Though, his 61 in the second innings of the Lord’s Test was a timely and characteristic innings. But still, the irony of the matter lies in the fact that both have not plundered runs to win back lost confidence. Additionally, there’s no semblance or guarantee of big runs in the near future. But, both are almost certain of playing the entire Test Series and even beyond.

Does that signal something?

It throws cruel light on the fact that mediocrity bears quiet tolerance in Indian Cricket.

Not only that, both Pujara and Rahane bat alongside Virat Kohli, whose lofty standards of batting make even a half century look like an underachievement. Virat’s early dismissals in the series have been a matter of intense speculation and have had a bearing on India’s ability to post big totals.

Suryakumar Yadav may not be an ideal replacement for Rahane or Pujara. His recent successful exploits in the white ball format against England and Sri Lanka  has also been embittered by his propensity to throw his wicket after a promising start. And with James Anderson and Ollie Robinson breathing fire, handing Suryakumar Yadav aka ‘SKY’ a Test debut may be fraught with high risk. In fact, many people would find even the thought of including a T20 smasher ludicrous.

So, how does he promise hope?

The call for his inclusion is not only based on mere desperation, there’s a little Cricketing logic to it. His solid back foot game may just give him an edge in scoring runs over the two good Samaritans, Pujara and Rahane. After all, the habit of shifting pressure back on the bowlers is not only a useful white-ball trait. It has its place in Test Cricket and can be well validated by a hefty Aussie opening batsman, Matthew Hayden.

Sourav Ganguly is rightly hailed as the greatest Indian captain ever because of his proclivity for taking calculated risks. The brave decisions that he took by introducing Virender Sehwag to Test Cricket and eventually letting him open the batting paved the way for a sensational Test career.

It is frightening to even imagine that the duo of Shastri and Kohli have failed to groom any middle order batsman who is knocking at the doors of Test selection? So, there is no harm in giving Suryakumar Yadav an extended run in Test Cricket. KL Rahul was persisted with, despite him having been in horrid form and look at the Lord’s magic?

Though, he does not possess a watertight technique but still he will bring some lost freshness in the jaded Indian middle order. His ability to be unorthodox may yet take the England bowling attack by surprise in the last two Test matches. With Oval being one of the best batting tracks in England, Virat Kohli must not lose out on the chance to spring a surprise by including Suryakumar Yadav in the fourth Test.

Though Indian fans mainly relate him with IPL and Mumbai Indians, but behind the success while wearing the glittering  blue shade of Mumbai Indians  is years of toil in whites for Mumbai in Domestic Cricket. His ability to play spin bowling well may not be useful in England but it will surely be a move that will warrant eventual success not immediate upheaval.

Considering the recent state of affairs, how many will object to his inclusion? 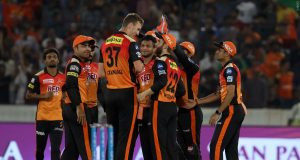 Savour The Underdog: The Rise And Rise Of Sunrisers Hyderabad!

Bhavesh Bhimani - May 6, 2018
0
There is just something about the underdog, isn’t it? You want to support him. You want him to succeed. And when they do, you...