Nothing wakes up the yawning back alleys of Borivali as cricket does. So does a cup of tea, sometimes.The afternoon tea in middle-class households is a moment of reflection, consideration and perhaps the best opportunity to make a proposition. Dinesh Lad, former coach in the Mumbai Cricket circle, kept the cup on the side table. He initiated a dialogue with his wife that changed the viscera of a peculiar cricketing journey.

Lad made an uncanny request to let a teenager come and live with them in their 2BHK flat so that the boy could get quality cricket coaching. Although, the seeds of this conversation were sown a couple of years ago, during an inter-school match.

While watching Tarapur Vidya Mandir play, Lad noticed a bulky teenager who first fought his way to a stroke full 78 and then rushed most batsmen on display and picked up five wickets. Just a 15-year-old, gliding through his adolescence, Shardul Thakur could still bat, bowl and had a zeal to perform.

” I am a zero level coach,” says Lad, who flunked the BCCI Level 1 coaching exam and never gave a second attempt. Yet, in his twenty years of honorary cricket coaching, he has nurtured the likes of Rohit Sharma and Shardul Thakur. In the last two decades, he has coached a talent pool of the size of an ocean of which Sharma and Thakur are perhaps the brightest jewels.

Right off the bat

Born in Palghar, in the lap of the ocean, Thakur has now sailed into cricketing glory after he scored the fastest-recorded half-century in Test matches in England. With India sinking at 127 for 7 in their first innings of the fourth Test, Thakur drove, pulled, muscled and guided his side to a standard total of 190.

After being padded up for more than nine hours and 16 minutes and having not scored a Test match hundred for eighteen months, Kevin Pietersen, walked out to the Adelaide pitch with a respectable amount of boos behind him. During that extended dry run, Pietersen was also dropped from the side and had an opportunity to go back to his roots in South Africa where met his mentor, Graham Ford.

Within ten minutes of watching his disciple bat, Ford pointed out the missing link. The observation was made that Pieterson was not getting his head to the ball and was just using his hands to get by. Immediately, Pietersen started watching the ball better and made a cautious effort to get his eyes closer to the ball. A month later he got a double hundred against Australia in an Ashes Test.

In 2019, when Thakur was nursing his ankle injury, he visited the BKC ground for training where Lad was already doing some coaching. In about two batting seasons with his mentor, Thakur made a minor tweak to his bottom hand grip that allowed him to time the ball better. A month later, Thakur was in Australia, playing his first Test of the tour, at the Gaba, timing the ball and scoring an attacking 67.

No matter how many Test matches you’ve played, when you’re trying to improve your game, you only want to engage with someone whom you can trust, someone who knows your game inside out. Ford’s tip to Pietersen and Lad’s advice to Thakur is exactly how the universe of cricket works.

If Thakur’s batting transformation was rekindled around holistic coaching and immense self-belief, his bowling made strides purely because of his arduous routine. For most of his age group cricket, pace was his biggest ally. But after breaking into the Ranji Trophy dressing room it was evident to him that pace can not be the only accessory he wears on the field. Thus began his quest. A career-defining pursuit to become a complete bowler.

While swing had been his old friend, control had ghosted him for a while. His first objective was to be consistent in his mode of attack. Thakur’s red-ball skills only got upgraded when his red-ball bowling muscles grew stronger. Countless hours of bowling, running by the sea against the breeze and sticking to a stern fitness regime gave him faster legs, robust shoulders and a stronger core.

The results were startling. He scalped 48 wickets at 20.81 from ten games with five five-wicket hauls in just his second first-class season. Although Thakur’s proficiency while bowling with the white-ball came much later. That in itself is a case study of self-appraisal.

He was picked up by Kings XI Punjab in the 2014 auctions but hardly played in that season. He travelled, trained and thought upon the lack of opportunities but never stopped getting better at his day job. Gifted with a unique sense of self-awareness, he walked away from that season understanding the need to elevate his bowling in the shorter formats.

Getting back to the grind, this time, the focus was to add variations to his bowling buffet. And so he did. He learned to use the crease, vary his length, fluctuate his pace and most importantly trained his mind to execute his plans under pressure. Within a year, all that hard work paid dividends as he was given the India blue against Sri Lanka.

Lad still laughs while thinking about his first-ever live interview on TV as a coach. This was not long after he had made that proposition to his wife regarding shifting Thakur to their home. The camera operator was constantly reminding him to look into the lens. He was being interviewed because Thakur had just hit six sixes in an over in the Plate Division of Harris Shield.

Note: the inputs from this article have all been taken by the author from a cluster of individuals close to Mr. Thakur, including Mr. Dinesh Lad, former coach of Mumbai Ranji team- who spoke exclusively with Caught At Point. 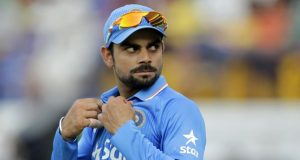 Virat Kohli, The Captain: A Different Leader Since The 2019 World...

Arpit Sachdeva - February 7, 2020
0
Once a 20-year-old prodigy rearing to prove himself at the biggest stage of the game, Virat Kohli has come a long way and is...