Cricket development must begin from the grassroots level. And the earlier it begins the better. The top-to-bottom approach, i.e., helping international cricketers correct basic errors- which though must be corrected-would make little sense at that level of competition. Which is precisely why one needs to identify youngsters willing to succeed in the game from very early on and then take them under one’s coaching wings.

Tutelage, therefore, can happen where it must: from the very basics.

It is like laying foundation of a strong ground floor only then can one expect to mount a skyscraper that goes on to achieve sky-reaching heights.

In an excellent demonstration of just that approach, the West Indies’ island of St.Lucia, in firm support of its venerable Ministry of Youth Development and Sports had launched the Northern Cluster Grassroots Summer Cricket program that’s been on for many years now.

What’s beautiful to note is the avid support offered by the government body toward helping coaches and gurus mentor today’s talents, who’ll get to be, if

That being said, among the key aims of the Northern Cluster Grassroots Summer Cricket Program is to not only welcome budding cricket enthusiasts, but to instill in them, from an early age, the love for the sport, besides the necessary skill-building and exposure toward cricket by virtue of a different set of activities that foster the following:

A sense of camaraderie, cricket being a huge team-driven sport

A flair for understanding the technical aspects of the game.

Early introduction towards the nuances of the sport by virtue of pitting aspirants in the said program against one another through proper cricketing contests.

And one of the key lynchpins of this program has been Alton Crafton, a noted coach, former cricketer from the islands, and a prominent face behind pushing youngsters toward the sport that eventually makes destinies and forges proper careers.

Mr. Alton Crafton has, over the years, risen as a cricket guru, who needs to be talked about in greater detail across the Caribbean islands. That’s not just for the fact that he’s the current mentor of one of West Indies’ most important rising forces- Kimani Melius. But that’s also down to the fact that where coaches are many, it’s difficult to find those souls who are so willing to be selfless in their support to many a young life pursuing this great sport of ours.

The 4th Annual Northern Cluster Grassroots Summer Cricket Program in association with the Ministry of Youth Development and Sports recently came to a conclusion in the revered cricketing island of St. Lucia.

That being said, the following are the key achievements of the 2021-bound Northern Cluster Grassroots Summer Cricket Program in support of the revered Ministry of Youth Development and Sports:

Some of the salient features of the Northern Cluster Grassroots Summer Cricket Program (at St.Lucia) are:

The training camp was well attended with an average of 65 – 85 attendees on camp days.

The Lecture presentations was focused mostly on the Mental aspect.

A lot of emphasis was placed on discipline hence a fine system was in place for corrective behavior.

On the final day of camp, the Grassroots Campers presented to a former sports personality Mr Timothy Delfus (He is aged and can’t move around) in our community grocery items etc and the cash collected from our fines. 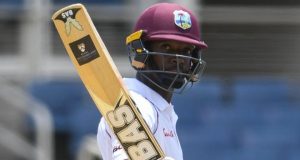 What Shamarh Brooks Brings To West Indies That Many Others Don’t...