But just how do you produce electricity in the room without knowing the right switch?

Unless one were to opt for the right methods and practices that could do more than revive the sport the Caribbean can’t be imagined without, how can any change be expected?

To bring forth a turnaround in one of the most widely known and vastly loved cricket teams in the game, the system needs to be put through an overhaul.

Frankly, anyone who feels talent in the West Indies is the problem would be siding with the most uninformed statement there can ever be. It’s like living under a rock.

We know the Gayles and Pollards and we have seen the Laras and Sobers’.

Today whether you look at Stafanie Taylor, Shai Hope, Shabika Gajnabi or the likes of Kirstan Kallicharan, Rahkeem Cornwall, Quiana Joseph or Kimani Melius, you’ll find there’s plenty of match-winning and redoubtable talent in the Caribbean.

It’s not the dearth of talent; but those of resources in the Caribbean that can shape it, convert prospects into bloomers, and transform the narrative about Caribbean Cricket having a dash of flair into making great players.

And examining this very poignant space, a lair of opportunity for the West Indies Cricket, Vernon A Springer and Cal Blankendal deep dived into an insightful discussion with the person who perhaps has all the answers as also the way forward: Mr. Johnny Grave, CEO, West Indies Cricket.

In marking the maiden episode of what’ll be a series of moving, tell-all, insightful tales about the game’s newsmakers and emerging stars from the Caribbean (and beyond), Vernon A. Springer and Cal Blankendal joined forces to hit a fantastic On Drive along with the key cricket figure in the Caribbean, Mr. Johnny Grave.

A discussion that unearthed the ambitions to revive Cricket in the Caribbean, note the key challenges and find directions thereof, along with the prospects and what to expect from the West Indies cricket in the months ahead, On Drive’s 1st -ever episode couldn’t have been a more engaging one.

Here are the key highlights of what you, the fan and pure lover of Caribbean Cricket would love to note basis Mr. Springer and Mr. Blankendal’s conversation with an eminent figure connected directly with West Indian Cricket:

Catch the full episode of On Drive here: 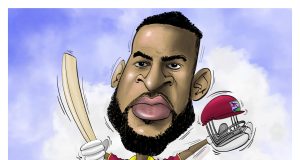 Shai Hope: A Reason To Rally Around The West Indies