The forthcoming December 23, 2021 will be a normal or routine day for most others around the world. That’s especially down to the fact that everyone would be darn excited given Christmas would be around the corner much like Meg Ryan and Tom Hanks’ Shop Around The Corner-based You’ve Got Mail.

But for a certain George Edward Ngegba, December 23 would be anything but a normal day; it would be the occasion where much of Sierra Leone will look in one direction and one alone.

That’s the venue of the prized National Entertainment Awards, a mega Sierra Leone-bound event, that will excite and entertain in equal measure.

In an age that’s becoming so entertainment-leaning, one where there are more awards than perhaps there are people (in some countries), it’s a delight to know that a cricketer and his talent are being taken seriously.

And that too, in a country where Cricket isn’t necessarily the most famous sport for the national love is Football. In some ways, a rising force in world cricket, George Edward Ngebga is an antithesis to the established norm in his beloved country.

Not only is the avid young cricketer among the noted talents in Cricket; he’s a passionate advocate for youngsters like himself and others to take to a sport that has great meaning. One that shapes identities and fosters a culture of bonding, sportsmanship, and is about unity.

The sheer speed at which George Edward Ngegba, an IPL lover who’s not even 20 yet, is peaking, it must be said, his career deserves more mention.

Not that the cricket fan doesn’t know about George Edward Ngegba, who’s perhaps one of the finest things to have happened to Sierra Leone’s cricket.

But it must be said that despite facing several odds in life, George Edward Ngebga has risen to become a reminder that you must not back out of the sport at the face of adversities or just because you are not in the prominent cricket-loving nations such as an India, Pakistan, England or others.

The right-handed batter is one of the best things about cricket in Sierra Leone at the moment.

And he’s trying to be relevant and to be heard in a sport that so often turns a blind eye to the unsung and prioritises commercial rewards and mega corporate deals.

With a hope to reach a wider world, inspire countless connected to the sport and more, Ngegba is fighting a cause for recognition and wide-reaching connect in a game that still brings people together and that’s not just through hand-held devices or video streaming platforms.

And George Edward Ngebga, who already led Sierra Leone nicely in Cricket in 2019, has something that can’t be- and mustn’t be-doubted.

The National Entertainment Awards must be lauded for identifying one of the simplest, nicest young men, among the few, who are trying for the cause of Cricket in Sierra Leone.

He’s become the first cricketer from the fun-loving and sport-obsessed nation to have earned the nomination of the prestigious decoration thrice in a row.

No other sportsman in his age group, let alone belonging to other spheres of life, has earned the irreplaceable joy of being nominated for the award on three back-to-back occasions.

Fierce and competitive on the ground and polite and positive off it, this is someone who led his country to the Under-19 world cup as captain and expects to be a key talking point in a country in the course of its cricketing future.

Caught At Point caught up with George and asked the young man’s mind over his splendid feet and realised of the many things that stand out about this cricket-mad talent, one thing does so loud and clear:

And it’s that performances and commitment maketh the man!

“It’s a great one for me o get such national recognition for my tremendous and outstanding work since the start of the year to now. I’m overwhelmed about this feat. It’s the third time in a row that I’ve got this nomination. National Entertainment Awards is the biggest awards event in the country. They are the most trusted, independent, experienced, reliable and transparent awards event holder,” exclaimed the thrilled young man from Sierra Leone who wields a Puma bat.

Watch out bowlers. The force is with Sierra Leone’s nice guy. 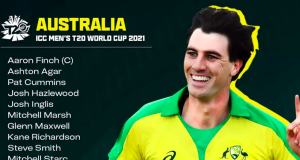 Gaurav Sethi - October 22, 2021
0
One of the most adrenaline pumping talents of world cricket, Australia actually constitutes more than a cricket team;...