We are a few hours away from the commencement of the ICC World T20, 2021. The group stage of the mega event is set to begin with Oman taking on PNG at Al Amerat. Sri Lanka begin their campaign by playing their first game against Namibia at Abu Dhabi. Their other opponents in the group are Ireland and Netherlands.

Overall, the Sri Lankan squad looks decent and has the variety considering the respective roles of the players. How fairly will they perform in the WT20?

Now, tet’s analyse thoroughly to find our answer or if not, something closest to our answer.

If we talk about the batting options of Sri Lanka, Kusal Perera is expected to be their man in the powerplay as they will heavily rely on his fireworks to get a good start. There is the talented Avishka Fernando, who has played some really glorious knocks in ODIs. The experienced Dinesh Chandimal and two young guns Bhanuka Rajapaksa and Pathum Nissanka are also there, who are expected to play the supportive role in innings building. The allrounders Shanaka, Asalanka, De Silva, Hasaranga and Karunaratne are very much capable of playing useful cameos. So, the strength in their batting lies on the ample number of batting options they have including the allrounders.

The fact that seems to be a weakness of the Sri Lankan batting is the inconsistency of their batters in T20Is. In their lineup, nobody except Chamika Karunaratne averages more than 30. The recognised batters like Chandimal, Dhananjaya de Silva, Dasun Shanaka; all average less than 25 which is a worrying sign for them. Also, the strike rates of all these batters who are expected to bat in the middle order are less than 130. They will primarily depend on Kusal Perera and Avishka Fernando to provide them a good start, but their middle order looks very unlikely to utilize that start in the most appropriate manner.

Now, let’s have a look at their bowling department. Their spin department looks very promising and solid.

It comprises of strike bowlers such as Wanindu Hasaranga, Akila Dananjaya and Maheesh Theekshana and supportive spinners such as Charith Asalanka and Dhananjaya de Silva. Hasaranga is currently the number two-ranked t20I bowler and has picked 36 wickets in just 23 innings at an outstanding economy of mere 6.58. Akila and Theekshana are mysterious spinners and their variations are pretty difficult to pick at times. Their biggest strength is definitely their spin bowling department and facing these spinners on the tracks of UAE could be really tough even for the bests in business.

Their pace bowling department looks decent as they have Dushmantha Chameera and Lahiru Kumara who can deliver the ball with a really good pace. They have the ability to purchase anything available on the surface and therefore their spells with the new ball will be the key for the Lankan lions. Further, the left-arm medium pacer Binura Fernando has 69 wickets in t20 format at an economy of 6.90. Chamika Karunaratne and Dasun Shanaka can chip in useful two-three overs. So, the seam bowling department looks okay, but not an extraordinary one. It’s their spin department that will mostly decide their fate in the T20 world cup.

We shouldn’t expect many changes in the team that recently played two t20Is against Oman. The following XI could be the best possible one for Sri Lanka.

Talent there’s plenty and undoubtedly so. The likes of Akila, Hasaranga, Perera and Shanaka offer stability and flair. But can the others rally around the important quartet to push forwards?

One certainly can’t expect this squad to lift the trophy instantly or on paper. But then the likes of the versatile Hasaranga, the apostle of calmness that’s Karunaratne and the big-hitting Kusal Perera will play key x-factors that can march on for Sri Lanka and perhaps help the team even pull up a surprise or two or even cause upset in what lays ahead. 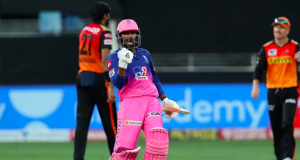 Abhinav Bose - October 14, 2020
0
The list of young Indian players who blazed away in the IPL with their exciting performances is quite long. From a purely batting perspective,...