One of the most adrenaline pumping talents of world cricket, Australia actually constitutes more than a cricket team; it’s a bastion of excellence. You could be anyone- a homeaker with interest in sports, a start up entrepreneur, a restaurateur, a first year college-going youth or a veteran in a salubrious Sydney pub who’s only who’s only just witnessed a fantastic Ashes series, everyone expects Australia to go the long way.

It’s just how it is.

Most other teams will come, try to- or will- at the most, win a big series, or if not, get hammered, but will largely be kept on the backburner. But Australia will always come and do something special. Over the decades, regardless of the format of cricket, this beating heart of the sport has inspired and ignited awe in equal measure whether one speaks of the feats of the great Victor Trumper or Sir Donald Bradman, whether one revisits the icy cool captaincy of Waugh or the trailblazing triumph of Warne.

Even cricketers who earned the scorn of the general public, think Steven Smith and Dave Warner have once again, regained the love of most fans for the sheer talents they are. Then there’s this famous trinity of Starc, Hazelwood and one of the most admired current names- Pat Cummins.

And yet, where it comes to this new, hungrier, not-from-the-nineties lot, there’s been one massive disappointment despite all that dazzling talent.

And it’s the absence of a T20 World Cup trophy in Australia’s cabinet.

So is Australia going to correct its major wrong this time around?

For starters, the team’s recent form doesn’t cut a hugely inspiring or positive figure. Remember the depleted side that traveled to the West Indies and came back hammered 4-1?

Moreover, this form guide suggests they might be undercooked and have a unsettled look to the side’s make-up.

That’s considering the Aussies haven’t been able to field there first choice team for as many as the last four series during which they have won just five (5), but lost thirteen (13) T20 internationals.

To any teacher habitual of seeing a class-topping performance, this would read unreal.

Not a performance you want to carry into a big tournament like a World Cup-right? But, then count Australia out at your own peril.

It’s a team that in the third edition of the world cup (T20) made it to the finals, it’s a team that boasts of one of the best current batsmen in the game in its line-up.

Here’s something that may play a big role when you think of cricket as being a team-based sport comprising different individuals.

The Australian players will largely be turning up for the World cup away from each other, some from their respective IPL franchises and others, from their state teams at the domestic level.

Just having a look at the 15-member squad that’ll be representing Australia at the world T20, one gets a fair idea of the strength each individual in that team possesses.

But can they combine together to give Australia that elusive title that has been their Achilles heel since the inception of World T20- only time will tell.

Let’s have a closer look at 15 men Australia squad for the T20 World Cup:

Australia’s skipper didn’t had a IPL deal for the 2021 season and hence was spending the weeks leading up to the World Cup trying to recover from the recent knee surgery.

Australia’s vice captain gave IPL a miss when it got rescheduled in September as he had something much important to attend to – the birth of his 1st child. Cummins has thereafter has joined his teammates in the UAE ahead of there 1st game on October 23. Cummins has not played any cricket at all since the IPL was called off in late April, he’ll need to quickly hit his stride again once the World Cup gets underway.

One of Australia’s leading players on the winter tours, Agar is coming from a time spend at home in Perth training with Western Australia before he departed for the UAE.

A dream last 12 months which saw him winning a World Cup spot. A bright right handed wicket keeper batter was keen for some time with family and friends having been playing in England since June, meaning an IPL deal wasn’t seriously looked at as a lead in for the World Cup.

The all-rounder was One of the shinning lights for Australia on the winter tours of the West Indies and Bangladesh, Marsh stayed with Western Australia before he departed for the World Cup.

Hazelwood turned out to be a vital cog for Chennai Super Kings becoming an IPL champion for the 4th time. His spell at the start and his death bowling did not only helped CSK getting vital breakthroughs but also served as an ideal preparation for Hazelwood to be warmed up when the World Cup commence.

Another talent who withdrew from the winter tours for personal reasons and now marks his return for national duties albeit at a huge stage, Richardson, the fast bowler stayed at home in Adelaide with South Australia and played a Marsh cup game against WA on September 22 before he departed for the World Cup in UAE.

Can his change of pace and exciting mix of deliveries garner his team the goods?

Looking for some entertainment tonight, tune into the ‘Big Show,’ will be the motto of Maxwell and the expectation of most fans for Glenn Maxwell is the Gayle or Afridi, one could say, for the team from Down Under.

Last T20 game for Australia: coming from a red hot form in the IPL, the right hander is arguably Australia’s most important batter but in a squad with three frontline spinners who all turn the ball away from the right handler, his off spin may also be an important weapon in the World cup.

Thou shall not take Smith lightly!

Coming from the IPL, where he played a handful of games, only three to be precise (for the Delhi Capitals), Steve Smith will, at least, have the know how about the conditions at hand for the World Cup having spent a good month or so training in the UAE.

Remember this is a man who all but led the erstwhile Pune Supergiants to an IPL title triumph and someone who has a T20 ton in the IPL against his name.

But can this whale of a talent from New South Wales, whose T20I strike rate is 130, get a first T20I ton of his career. imagine the sight of having one at the mother of all T20 battles?

Brilliant on his day, mediocre the very next, the here already-not-sure-where-he’ll-be talent needs a strong tournament to silence his critics, one of which could actually be Stoinis himself who knows his infinite potential that merits some consistent performances.

By the time Australia’s World Cup campaign gets underway, which is well, in the next 24 hours, the right-handed batter will know his job is to convert his useful Delhi Capitals campaign in the recently-concluded IPL into performances worthy of setting the World Cup on fire.

Having played his last competitive game a couple of months back, Starc will be hoping to lead from the front with the ball and help Australia with early breakthroughs. There’s little doubt about the potential and match-winning talent of a bowler whose economy is just a touch above 7 in T20Is, one who’s already claimed north of fifty wickets in the format.

But can the deadly Starc of the old rise to the fold?

The leg-spinner made the most of his chances on Australia’s winter tours to secure a World Cup spot, although it remains to be seen if the Aussies will opt for 3 frontline spinners – Swepson, Agar and Zampa – in the same X1 at the tournament.

Having captained Australia for the winter tour to Bangladesh in the absence of injured Aaron Finch, Wade’s experience will be handy for Justin Langer and Company.

Under fire right now, as is often the case, will a fire rise in the form of Warner or will it get buried under a sea of listless performances, we don’t know as yet.

What we do know, however, is that David Warner has been derided, poked fun at, called names even and all of that is sufficient to ignite the David that lays within this not so Goliath-looking cricketer.

Having been not only shut off from the captaincy duties from his Sunrisers Hyderabad side, but having also been dropped from the team itself, Warner will be itching to show his worth and class and, would love to stamp his authority on the game.

Listen up the rest of the teams in the World Cup, better beware.

Arguably, the best leg-spinner in the game who’s hardly considered as one?

The recently-married leggie, who missed the rescheduled IPL to be with his family, will be itching to turn his arm over on the spin friendly UAE pitches.

With one of the best bowling attack at there disposal, Australia’s greatest hope lies in there top order featuring captain Aaron Finch, David Warner and Steve Smith.

People might look at India, England or even West Indies making the final of this World Cup but the individual brilliance in this Australian line up can give any team a run for there money. All in all, a great World Cup to be a part of as a fan. 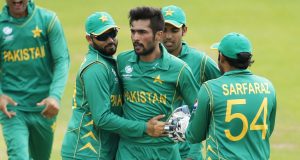