On October 23, 2021, the West Indies, defending champions of the T20 world cup, opened their campaign against a formidable opponent- England. And a little over an hour on the very day that could’ve been spent playing watchfully and cautiously did the West Indies return back to the ground of the Dubai International Stadium.

So where were they in this short while?

Disappearing from the crease faster than Harry Houdini did from a captive box during his spellbinding magic shows, the West Indies were scuttled out for 55, their lowest ever total in a T20 world cup game. Much of the time the team could’ve spent on the wicket collecting runs after having lost a very good toss, was spent in the dressing room.

For it is there where serious talks may have happened. Talks to understand what really transpired in a stay over the wicket that was shorter than a guest appearance of a star actor movie.

The role is defined, famous but all too brief; the script of the movie upholding the triumph of the hero, the one who persists.

Just that when persisting was free of cost for either teams, only England seemed interested.

In what truly merits creation of a documentary movie only to inspire future generations on how not to bat, perhaps with the title “55 all out,” the West Indies saw a batting-heavy side crash like the stock market on a disappointing Monday.

Remember, this was a team comprising of no fewer than eight batters, all of whom managed to hang out on the crease for a total of 34 deliveries, which means each batsman survived 4.2 deliveries, on an average.

In a world that throws upon each one of us disappointments in some form or the other, the 55 all-out was a performance beyond disappointment, one that needed some correcting.

And while on the field, he failed much like his own batters, Kieron Pollard, you ought to think would’ve done something about his side.

At times, doing the simplest of things such as taking cognizance of all that fell apart can help tighten up the loose ends.

But while approaching big Polly over the disastrous performance of his West Indies would’ve obviously been extremely demanding at this time given the World Cup is on, we interacted with someone, who did more than just shed light on what went wrong in the encounter versus the English?

Caught At Point touched base with Caribbean Cricket expert Vernon A. Springer, based in Antigua and Barbuda, to get some sense about what had happened.

“West Indies went down to England. 55 all out! Also in 2021, The Netherlands were bowled for 44. All is not lost. If you ask me, if I was Kieron Pollard here’s what should happen. I shall take out a piece of paper and write down strengths and weaknesses. But what am I talking about? The West Indies, we ought to remember, faced 86 balls today, of which 59 were dot balls. The West Indies, I therefore, say need to get their GPS on. So what do I mean by that? Open with Evin Lewis and put Gayle, the mighty left-hander back in the team’s opening spot,” shared Mr. Springer.

Meanwhile, Vernon A Springer ws also of the view that the current team should be wary of inducting new prominent bats from the other end and first fix an issue that doesn’t merit being entertained.

“This whole Gayle at # 3 experiment is not working.. “Not for me if you ask. Should he be made to open, the team can think of bringing in an extra spinner much like Samuel Badree or Ashwin in the old days or someone who can double up as a frontline batsman. To support the bowling line-up, is the main idea and If I was the West Indies’ captain, I would like to have seen Pollard smile In a bid to try the mix-up including.” Secondly, I don’t know how much more can one emphasize on the importance of rotating the strike. But it was clear today to see that the WI, much like in the first 6 overs in the Powerplay, weren’t getting there. The men in the Maroon will know that the ignominious has happened to them; but it is all in the past,” he’d conclude.

Can the team move forwards? The tournament has only just begun. And yet, at the same time, each game counts. 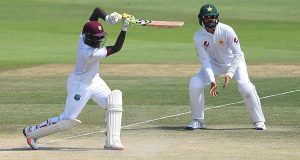 How Valuable Is Jermaine Blackwood For The West Indies?

Dev Tyagi - November 20, 2017
1
Over the course of past half a decade, the kind of cricket the West Indies have played resembles all seasons in a year. They...