The tournament’s highest score, thus far, it being 190 for 4 has come from their bat. If there’s a team besides Pakistan that has won all games it has competed in so far, then it’s them. Theirs is a bowling line up that can do more than catch batting orders off guard; it can simply mow them down. There are teams that succeed much too sudden with an element of surprise. Then there are those that work for success painstakingly, but never get it. And then, there’s Afghanistan that surprise and inspire in equal measure.

So how is that and what’s been Afghanistan’s rise to prominence so far in the mother of all 2021 T20 battles?

Afghanistan defeated the mighty West Indies in one of their warm-up games and further went on to beat Scotland convincingly in the one-sided face off at Sharjah. They seem supremely motivated and are thus all set to surprise the big guns like Pakistan, India and New Zealand. How impressive they have been so far and what should be their appropriate plan against the table-toppers Pakistan in their next game? Let’s analyze some key points to find our answer.

On the relatively slower tracks of UAE, the primary aim of the opening duo should be to capitalize on the field restrictions in the first six overs. This paves the way for posting a really healthy total on such decks.

The openers of Afghanistan, Mohammad Shahzad and Hazratullah Zazai have scored runs at a rapid pace in the first six overs. The dynamic duo has smashed 109 runs in their games against West Indies and Scotland at a magnificent strike rate of 149.31. The muscular giants have been too good in dispatching the balls into the stands, which is well evident from their brilliant collective boundary run percentage of 67.04. In their first warm-up game against South Africa, both of them were dismissed for duck and Afghanistan couldn’t chase 146. This pretty much sums up their dependence on these two batters to provide a solid start.

Apart from these two, the talented Rahmanullah Gurbaz and the experienced Najibullah Zadran have contributed some useful runs. Gurbaz scored thirty three against West Indies in the warm up game and forty six against Scotland in their first game of the Super-12 stage. On the other hand, Najibullah was spectacular against Scotland as he smashed fifty-nine runs off just thirty four deliveries with three fours and five massive sixes. These two have played vital roles in maintaining the momentum in the middle overs.

Although their finishers haven’t been tested yet, the finishing department looks solid due to the presence of the senior players like the skipper Mohammed Nabi, Gulbadin Naib and Asghar Afghan. Rashid Khan is also quite capable of playing quick cameos down the order. Thus, their batting looks settled.

In bowling department, Afghanistan have been massively dependent on their spinners. The captain Mohammed Nabi had an outstanding spell of 4-2-2-3 against West Indies in their second warm-up match. The deadly duo of Rashid Khan and Mujeeb Ur Rahman was remarkable against Scotland as they picked nine out of ten Scottish wickets collectively and thus played key roles in bowling Scotland out for mere sixty runs. Also, Mujeeb bowled a remarkable spell of 4-1-24-3 against South Africa in their first warm-up match. Thus, their spinners have been their biggest strength in the bowling department and they definitely have the ability to dismantle any batting lineup in the world cup.

The presence of dew during the second innings was evident in the Indo-Pak encounter. As a result, the Indian bowlers struggled to bowl in the right areas. It becomes significantly more difficult for spinners to grip the ball and get the purchase off the surface in such conditions. As Afghanistan rely primarily on their spinners, they should look to bowl first if they win the toss in their upcoming game against Pakistan although they have done brilliantly while batting first. It will be easier for them to bat second under wet conditions having a target in mind. The teams that have been batting second have gone on to win on all the three occasions in Dubai so far, which shows how good a ground it has been for chasing.

The Afghanistan team looks balanced and they have played some really brilliant cricket so far. Importantly, they’ve stuck together and watched each others’ back, a sign of a close unit. Their rise in international cricket is commendable in recent years as we’ve seen and one should certainly expect them to give a great fight as the tournament expands to pit them against the tough cookies. 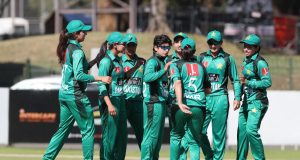 Some Of The Best Pakistan Women’s Cricketers Who’ve Given Us So...

Shruti Banerjee - May 23, 2019
1
Cricket is one of the most popular games all over the world, Pakistan is one of those countries where a first International Cricket match...