October 22, 2021 was an emotional night for Namibian fans, the cricket team, an unknown entity for international cricket followers had just registered its first ever victory over a Test team. Gerhard Erasmus’s team scripted a stunning win over their senior peers Ireland to secure a berth in top league of the T20 World Cup. Cricket’s popularity in Namibia had again returned to where it was few years ago!

Gerhard Erasmus was in tears when Namibia registered their most memorable win against Ireland in qualifying round of T20 World Cup in Emirates, against Ireland. The win has not only helped them to secure spot in Super 12 in current world cup but has also guaranteed them a spot in the next world cup in Australia in 2022. This is a huge achievement for a country where cricket is not no.1 game and has only nine cricket fields and five cricket clubs and with limited first class players.

Namibia’s debut World Cup was 2003 World Cup where the senior opponents mauled them but it seemed like Kenya they would be able to leave a mark in the future. Unfortunately, both Kenya and Namibia fell down the radar post that 2003. While Kenya‘s cricket disarrayed and has since not returned to the fore as on date, for associates Namibia, fortunately speaking, their team has returned back to the top in 2019 having performed well in Intercontinental cup.

This was a timely return to the top as Cricket has started to decline in the country with the barren run of nearly two decades weighing heavy on so many careers, besides having not inspired many to take to the game. It was post-2019, when the rise of some of the most promising cricketers and their consistent runs to secure the World Cup berth got attention of a new generation.

These were cricketers who started to follow the game again.

Albie Morkel, team’s assistant coach has echoed these sentiments “So, in the last three years people started watching cricket again, talking about it because the team really did well and it started with getting their ODI status in 2019 again and then having a good qualifiers in Dubai for this tournament. And we sort of kept that momentum going and I think it’s massive inspiration in Namibia again. As a young kid, you want to associate yourself with a national hero and that’s what these guys have achieved in the last three years. They’ve become national heroes and I’m sure it’s going to stand Cricket Namibia in good stead for the future.”

Namibia are enjoying their first major T20 International tournament, but it can be clearly seen they are not here to just make the numbers; they want to perform and perform well. Moreover, they have shown it against their senior compatriots like Netherlands and Ireland that they aren’t going to be taken to the cleaners.

Each time a Marasmus comes out to bat, each time a David Wiese strikes the ball with power and every time Trumpelmann bowls in to clean up the stumps, a sense of power and unity comes through and quite clearly so.

They are, however, well aware of their limitations that were exposed against Sri Lanka and Afghanistan where they were well short of the targets. Their lack of big-match experience was also exposed against Pakistan, where a much-experienced team might have put the opposition in enormous pressure.

But even in these matches, there were patches where the team’s caliber indicated clearly that should they continue to play as one, no goal will be far off limits.

Namibia might end up losing by a big margin against India and New Zealand, but the team has given enough to savor for to its fans.

In Gerard Erasmus, Ruben Trumpelmann, JJ Smit, the future generations of Namibian Cricketers have got a number of heroes to look forward to. In a game wired in the now, it is the promise of the tomorrow that holds great value.

And where their tomorrow stands, it looks bright as more and more youngsters are looking forward towards making a career in cricket.

This could be promising and destiny changing even.

Namibia though must be careful, as the world has seen Kenya and Zimbabwe falling away due to mismanagement in their administration. There are great lessons to be learnt.

Namibia cannot afford to do so because its structure is not as strong as Kenya or Zimbabwe. It would though love to bask in the current glory and take one step at a time towards forging what clearly seems a promising future. 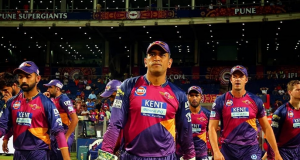 As Pune Attempt To Challenge Mumbai’s Might, IPL Unfurls A Vital...