Pakistan had a dream start to their T20 World Cup Campaign; not only did they became the first team to storm in the semifinals, but for the first time ever, they were able to defeat their arch-rivals India in a T20 World Cup encounter. One of the main reasons for their success has been their wicketkeeper batsman Mohammad Rizwan, who has now become Mr. Dependable for Pakistan in recent times!

On the night of 24th October 2021 when Pakistan’s twenty nine year long wait for defeating India in a world cup encounter was over, it was befitting that two of their most dependable batsmen in the recent times, Babar Azam and Mohammad Rizwan were on the wicket. Their first wicket stand ensured that Pakistan registered an emphatic 10 wicket victory. Rizwan’s 79* of 55 balls deflated India’s attack which could have sealed what was a decent total . During his innings Rizwan took calculated risk so that not only he was able to check the run rate but also to make it certain that the team didn’t lose early wickets.

As Pakistan romped into the semifinals with four consecutive victories , they will need Rizwan to keep on firing as the tournament enters into the final stage and every game will have its own pressure. Rizwan has been Pakistan’s Mr. Dependable now for quite some time, along with captain Babar Azam he has been the team’s go-to man, on whom the team can depend in any situation. His opening partnership with his skipper has been pivotal in the team’s recent success .

Mohammad Rizwan has always loved challenges and to overcome what people think as unthinkable. Mark of a possible great, you’d think.

He became a cricketer against the wishes of his father and mother, he never listened to the people who advised him not to jump on domestic grounds but he did and became one of the best fielders and later a top class stumper. He defied people who said that he should have stayed with WAPDA (Water and Power Development Authority ) rather than moving to SNGPL (Sui Northern Gas Pipelines Limited ). He later defied critics who said that he is not cut out for the white ball cricket by becoming an all format player .

Today, Mohammad Rizwan opens for Pakistan and has become a very key top order player in the team’s planning. Rizwan has played 17 Tests and has scored 914 runs  at an average of 41.54. He has also taken 48 catches and 1 stumping as keeper.  In 41 One day Internationals he had scored 864 runs at 28.80 however his record in T20 Internationals is even more impressive probably a reason why Pakistan has registered some remarkable success of late.  In 47 T20 Internationals, Rizwan has scored 1264 runs at an emphatic average of 52.66 and with strike rate of 129.77 .  As Pakistan are likely to take on Australia in semi finals, Rizwan and Babar’s opening stand will become very crucial for the team to ensure that they are able to successfully pass this Test.

Over the course of next 12 months, Pakistan are scheduled to play some high profile cricket series in the form of Tests against Australia, England and New Zealand at home. And then there will be the T20 World Cup in Australia in 2022.  Rizwan’s role in these series will define how far Pakistan goes to develop themselves into a top team once again. There are now two thoughts that he has carried the legacy of some of the finest wicket keepers that country has produced. The experts, however, stress that he has the potential and temperament to surpass players like Wasim Bari, Rashid Latif and Moin Khan, in the process of which he can become the best keeper-batter ever produced by Pakistan.

On his part, the undramatic and calm-headed Mohammad Rizwan is solely focused on ensuring that Pakistan once again become a top team and implicit in that will be the starts he has given them and has the capability of offering the same, time and again. 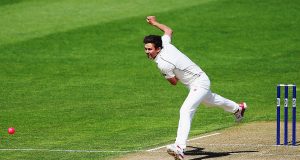 Is Trent Boult In The Footsteps Of The Greats?

Dev Tyagi - July 22, 2018
2
Cricket hates a low-scoring contest. After all, it's called a batsman's game. Flying stumps are pretty much about as dreadful as having a salad for a...