It’ll always be about moving forwards

Something the West Indies must work towards

A place where accolades thrive and troubles are kept at bay

Then someone will have to step in and create a way

Though make no mistake, this tomorrow won’t be a paradise carved in imagination

And one of the drivers for this much-needed change, whose time has come look

Born in Barbados and known everywhere in the Caribbean,

That young man trying to salvage the fight,

Giving cricket a new definition of passion, not a turf to conduct mindgames,

And let it be known that if West Indies are to pick themselves up again, one missing piece of puzzle a time,

Shai Hope will be a big reason nearly every time

That’s not to claw back to the days of glory; but to establish reasons to love them for many reasons,

None more bigger or important than believing in this bastion of excellence,

One to which the Laras’, Sobers’, Viv’s have all belonged,

One to which Hope’s name now belongs

Whether it was through his slicing of the Irish during his 170, or the centuries at Leeds’ that caused a very English rupture

Shai Hope has shown that all’s going to be fine

For as long as he will create melodies from the bat,

For his 101 versus Zimbabwe, a knock as fluent as they come,

Ensured bowlers felt listless for trouble is all they felt

Much like how Shami, Yadav, Jadeja and Chahal felt

When in response to a very Virat-looking 157*, Shai offered Hope with his unbeaten 123

Bringing the game certainly lost to a tie

And them Windies supporters smiling uncontrollably

The fans won’t leave stadia, get dejected, offer scorn or be blown away like the wild breeze

We have amid us a talent of massive scale

And for as long as he will work on his game, not be taken aback by the challenge that turning around Windies brings

Shai Hope will keep inspiring and drawing awe for every single being! 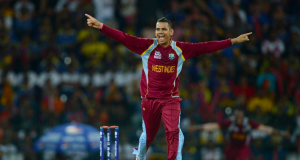 Dev Tyagi - May 26, 2020
0
A couple of seasons ago, speaking in a KKR-exclusive, Sunil Narine was asked a straightforward question. "What's the one big quality a spinner must have?" His...