When an opportunity knocks at your door, you have to get up and open that door or else- that opportunity might not return back ever.

For a major chunk of the previous decade Sanju Samson’s has been labeled as the answer to India’s wicket keeping woes, post MS Dhoni.

To his credit, Samson has even conjured a few magical knocks in the IPL – knocks that have drawn collective gasps of admiration from across the globe.

Unfortunately, massive strides forward have almost always been followed by two steps in the opposite direction, which meant whenever Samson has walked out to bat lately, he has to shoulder that extraordinary pressure and have almost batted to impress in order to warrant that permanent position in the Indian T20 team.

Samson has talent, no question about it.

In fact, that is perhaps the reason for his name to crop up every time an Indian cricket team selection committee sits up to select a team for any forthcoming series despite Sanju Samson having a meager strike rate of 110.38 at an average of 11.7 in 10 T20 internationals.

To stretch it a little further, when on song, Samson can make the most fearsome bowlers look pretty average and that is a quality that isn’t very common. He has shown that time and again in the IPL. Knocks such as the one against Punjab Kings in April 2021 are a testament to the talent the Kerala-born batsmen possesses.

And that perhaps is why Sanju Samson’s glorious inconsistencies are Indian cricket’s greatest paradox. You want to move away from it because the records say so and conventional wisdom dictates it. Yet, you can’t because at the back of the mind you know how aesthetically pleasing Samson can make batting look when in even half decent form.

So what could be the reasons for the enormous discrepancies in the talent Samson boasts and the output India are getting.

One reason could be that Samson just gets too complacent, especially after having a good score behind him. In the process, he often tries shots that might be too flamboyant for the current situation of the match.
Another reason could be that he gets carried away, which considering the effortlessness in his batting isn’t a massive surprise. He then tries to manufacture a shot that simply isn’t there and has to bear the brunt of his miscalculations

The one example which comes to mind is the T20I Samson played against Sri Lanka at Pune in January 2020 where he hit the first ball of his innings for a majestic six and yet on the very next ball he danced down the track to hit another one out of the park but this time the ball wasn’t conducive for that shot which resulted him to be caught at long on.

In order to be more consistent, Sanju Samson needs to be a bit more judicious in his shot selection, and be more selective in targeting a particular bowler from the opposition camp. One of the fundamental aspects of his batsmanship is his ability to play straight. Backed by his big hitting prowess, if he could mix some caution to it especially when he is new at the crease, it would give him a sense of infallibility and confidence to structure his batting innings.

At 27 years, Sanju Samson may not exactly be a spring chicken. But, he would hope he finally starts delivering in the blue jersey the same way he keep delivering year after year in the pink jersey of Rajasthan Royals or else it would always be the case of – another promising year nipped in the bud. 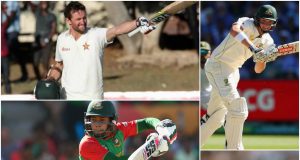 5 Batsmen Who Produced Unsung Jewels in 2017

Bhavesh Bhimani - December 19, 2017
0
Chris Gayle hardly had a bat in both formats of the game this year. Even De Villiers registered a long break from the game....