For a team that found itself pleading with those who abandoned visiting it at the very last minute , including the administrators of this great sport who failed to provide sufficient and timely answers, Pakistan have witnessed a turnaround.

This was a team about whom it mustn’t be forgotten- was called names.

Unsafe for players. Unprepared to host a series. Unsafe for the game even.

But theirs has been a turnaround in terms of the outlook of those who gave it these names for little fault of their cricketers.

Because where their game is concerned, not only has it matured, it’s quite simply forced the world to relook at the country from a prism that doesn’t recognize biases. A lens that instead focuses on the thing that must be measured when passing verdict on any cricketing nation.

And of that there’s little doubt given the way Pakistan first overwhelmed India before thrashing New Zealand, Namibia, and Scotland in the recent T20 World Cup of 2021.

For a country so often viewed rather myopically as being a ‘cricket mad’ nation, Pakistan for times to come, will be looked at a country that means business, a unit that shall not bow down to even the best in business.

For what’s the point in being the best if one doesn’t strive to become that? Something Pakistan did attempt- bravely so- in the recently-concluded 2021 T20 World cup basis the following performances:

Shaheen Shah Afridi: A Spell That Will Be Remembered For Years

“Rohit, Rahul and Virat are the world’s best batsmen. But if I could get one of them, that would be good,” Shaheen Shah Afridi asserted in a television interview ahead of the mega clash between India and Pakistan.

And he didn’t take much time to turn his words into action as he got the prized wickets of all these three batters – who are known as the backbone of team India, at the Dubai International Stadium.

The pressure was high on both sides as India vs Pakistan is a game of emotions, more than bat and ball but the 21-year-old didn’t show the tiniest signs of trepidation as he took the ball for the opening over of what was going to be the start of an incredible spell.

Afridi bowled a stunning yorker first up against Rohit Sharma that pitched right on the middle stump line, the in-swinger trapped the Indian opener plumb. Rohit was dismissed on a duck and Afridi got a big fish in the net in his first over itself.

But that wasn’t the end. It was just a trailer that the picture is still there. Coming to third over and his second, Afridi produced an unplayable inswinger to deceive KL Rahul, the one who was coming off a wonderful IPL season. The bails were sent for a ride as the Indian opener tried to play it across the line and was beaten by Shaheen’s pace.

And finally, Afridi finished his startling spell with the special wicket of Indian captain Virat Kohli, sending him back in the 19th over to become the first Pakistan bowler to dismiss the Indian captain in the T20 World Cup.

Pakistan’s openers Mohammad Rizwan and Babar Azam created a record of Pakistan’s best-ever partnership for any wicket against India in T20Is in the high-octane, India vs Pakistan clash.

The openers put up 152 runs for the opening partnership, assuring Pakistan successfully chased India’s total down effortlessly. They surpassed Chris Gayle and Devon Smith’s 145 against South Africa in 2007 as the top opening stand in Men’s T20 World Cups.

The last highest T20 World Cup partnership from Pakistan was made by Salman Butt and Kamran Akmal back in 2010. The two had scored 142 runs together.

The ‘Asif Ali Show’ vs Afghanistan

Chasing a mediocre 148-run target, the Men in Green defeated Afghanistan in a Super 12 tie by 5 wickets, with six balls to spare. The match which was supposed to witness the final over was finished single-handedly by Asif Ali in the 19th over itself.

Pakistan needed 24 off the final 12 balls with Asif Ali on strike. The moment when the men in Green decided to unleash his inner demon, sparing no one.

The 30-year-old smacked four monstrous sixes in the penultimate over and refused a single in between, showing how badly he wanted to finish it. It was something like he knew it was his time and that if anyone could do it, it was only him.

The first ball of the 19th over from Janat, that was full and in the slot was sent over long-off by Asif Ali. Then comes a dot ball followed by another length delivery which was sent over the deep mid-wicket boundary. Another dot ball came before back-to-back sixes took Pakistan to their victory target of 148 with an over to spare.

The 39-year-old has been playing international cricket since the last century when some of his current teammates were not even born, but still, he is considered as one of the fittest in the current Pakistan team and he proved it yet again in the recently concluded T20 World Cup 2021.

Malik, in a game against Scotland, played a match-winning knock and embarked his name in the history books by hitting the fastest half-century for former world champions Pakistan at the ICC World T20 2021.

Former India all-rounder Yuvraj Singh holds the record of smashing the fastest-ever fifty in T20Is, having smashed 6 sixes off Stuart Broad’s over and completing his half-century off just 12 balls in the 2007 T20 World Cup.

What else could it be if not ‘a hero’? The cricket fraternity was in awe of the men in green after witnessing his devotion to representing his nation amidst multiple obstacles.

Not many would have known before the last-four clash that Rizwan had spent two nights in the Intensive Care Unit (ICU) of a hospital after he developed a severe chest infection on November 9.

But he made an incredible recovery to feature in the must-win Pakistan’s all-important semi-final, which saw him play one of the best knocks in the ICC T20 World Cup.

The wicket-keeper batter went on to notch up an excellent knock of 67 runs off 52 balls to help Pakistan post a formidable total of 176 runs on the board in 20 overs, which was later chased down by Australia in the 19th over itself.

The knock could’ve come in the losing cause but his brave commitment for his nation would be remembered for years. 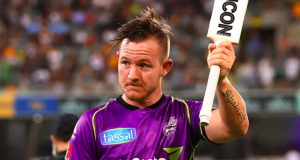