And just like that, AB de Villiers retires for all forms of cricket!

The world ran out of superlatives when they watched him bat and they run out of superlatives now as they bid him adieu as he walks away from the game. It just had to happen one fine day and most people knew that day was fast approaching. While it feels unreal that de Villiers will no longer play any form of cricket, it is time for a small little tribute to the man, the superman of cricket. The one who could literally do anything on a cricket field.

He may have played a lot of sports back in his school and college days but cricket? It seemed like he was just meant for it. Nobody could make the world stop what they are doing and applaud in awe better than de Villiers. He just made it a habit over the last decade and a half.

AB de Villiers could literally pull off Superman-esque things on a cricket field. He single-handedly elevated the game to another level and redefined the art of batting in many ways. The Pretoria-born cricketing genius made batting look ridiculously easy. At times, he’d make you rub your eyes in disbelief and recheck twice if it’s really happening.

There would be days when he’s smashing the best bowlers at the peak of their powers all around the park and winning games from improbable situations like he’s having a blast out in the middle. And on others, he’d be defending and dead-batting on Day 4 and Day 5 of a Test match as if his life depends on it. There would be days when he’d be donning the wicket-keeping gloves despite all his back troubles and being safe as anyone around the world. And on other days, he’ll be flying like Superman on the boundary ropes and taking catches that were never meant to be taken.

AB de Villiers is a freak. There is no question about it and no one will argue around it either. In fact, de Villiers has himself admitted that he ended up surprising himself on quite a few occasions. But the number of times he pulled off freakish things is simply insane.

Smashing fastest 50, 100 and 150 in the history of international cricket for fun as if it’s no big deal and that that too not once, but multiple times. Bailing South Africa and Royal Challengers Bangalore (RCB) out of a hole on countless occasions like it’s a day-to-day chore.

AB de Villiers’ career for South Africa ended more than three and a half years back. He had expressed his desire to make a comeback as well but it was just not meant to be and things fell apart. While the Protea Fire burns bright in de Villiers, there is this RCB blood that plays bold as well. And it won’t fade away! He is an emotion for the RCB franchise and the fans.

There were some Superhuman activities that de Villiers carried out on the field while donning the RCB jersey. Taking them to victory in a Qualifier game after being 29/5 or smashing 35 runs off the final two overs against Rajasthan Royals or pummelling Dale Steyn who was at his absolute best and the peak of his powers for 20+ runs twice or single-handedly driving RCB to a win to leave Virat Kohli and co awestruck on numerous instances.

The South African great is the only overseas player in the history of the IPL featured in at least one game across the 14 seasons. Such has been the impact he has had in the IPL.

AB de Villiers is arguably the most loved overseas cricketer in India. You’d be supporting the opposition but when de Villiers is batting, be rest assured you’ll be mesmerised. And that’s something that has happened so many times. The Wankhede Stadium in Mumbai went gaga when de Villiers went bonkers and smashed a stunning hundred in the fifth ODI (series decider) against India in 2015 and the crowd loved every moment of that knock. In the same year, he played his 100th Test match at the Chinnaswamy Stadium in Bengaluru and it felt like a home Test match for him.

There are very few players in the history of the game who have been as versatile as he has. The South African moulded himself in such a way that there is absolutely no aspect of the game that de Villiers couldn’t master.

Yes, he was just playing franchise T20 cricket over the last three or four years and largely, only the IPL. But it is indeed the end of an era. Now that he has walked away, the Superman can be super proud of the way his career has panned out. Be it IPL, international or even franchise T20 cricket, ABRAHAM BENJAMIN DE VILLIERS aced every format in a superhuman way.

And maybe, he’s timed his retirement to perfection. There’s a saying that goes, ‘Go away when they ask why and not why not?’. The range, the skill, the execution and the end result, AB always left the world enthralled and amazed at his brilliance.

Happy Retirement Mr. 360! You will always be loved and the cricket field will miss you. But one thing is certain, you will go down as arguably one of the best and the most impactful players of this generation. 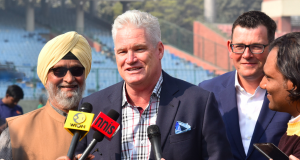