That Shreyas Iyer has made a befitting century on his Test debut is no ordinary feat. The pressure. The occasion.

There was so much to guard against. Then against that narrative, hitting a fine ton laden with thirteen fours and two sixes with many strokes from the meat of the bat. A perfect combination of defence and determination with there being no stoppage of runs.

Worth an applause. A standing ovation even.

But it’s what he did when India desperately needed someone to steady the ship that must be considered as the greater, more meaningful achievement.

For hundreds occur at the end of a painstaking effort. And that effort was evident on November 25.

But in a few days from now, it appears, a special day is going to arrive.

Shreyas Iyer will soon turn 27. December 6 isn’t that far anyway. It’ll undoubtedly be a day where the right-hander will be greeted by countless wishes, many prayers and maybe even fan mail from the ladies. But what must form the biggest reason to mark his special day should be what Iyer achieved a fortnight ago.

He will not forget the significance of the date.

For a batsman considered a vital fix in India’s white-ball plan where he hits- not accumulates- runs, it’s what Shreyas Iyer did in red ball cricket that will be remembered for as long as his career lasts.

And may it last till as long as Shreyas Iyer wants.

At a time when Pujara fell early and Rahane found a way to obstruct what had been a nice inning, both bats finding rhythm before cutting short their journeys, Shreyas Iyer appeared and chipped in.

Iyer arrived in the middle in Test whites for the very first time on November 25, 2021 and soon seemed as though he belonged at this level.

The comfort. The poise. The unhurriedness. All of that suggested here was a bloke who had perhaps been raring to go, ever so unassumingly.

The score at the time of his arrival read 106 for 3. Pujara, India’s mainstay at number 3, the man who would so have wanted precious runs, had returned. He made only 26. Maybe a thirty more, to say the least, would’ve added more thrust to the team total.

But nevermind. Such is life.

Yet, something was amiss for India.

There being no Rohit and with Mayank falling early, there was a sluggishness to the scorecard already.

Forget not- no Kohli, no Rahul in the series. Such a blow!

Meanwhile, the tall man Jamieson was on fire. Southee seemed collected. What would become of India, one wondered?

Someone had to chip in and come in the way of the Kiwis getting it all easy.

And that man, as the visitors learned not long after his arrival, was Shreyas Iyer, not Ajinkya Rahane.

By the time the day’s play ended, the 106 had become 258. India would lose only one more wicket. Captain Rahane had found a way to contribute to the his own dismissal, shattering his stumps 35 runs after he arrived.

But the man who had strolled down the pitch much like how a Worli resident approaches the sea face was still there.

He had stuck in. Looking comfortable, unperturbed all throughout.

The pitch his temporary residence for November 25; while the time he batted – and he batted with a grace and purpose- India shuttled from the sea of obscurity to the comfort of reassurance.

Shreyas Iyer was grace and power.

Facing 136 deliveries in all, around fifteen more than what Agarwal and Gill faced between each other, the right-hander seemed a man in control.

At one end, there remained one of the faces of Indian cricket’s future. On the other, there stood the all too familiar dash of fire in ‘Sir’ Jadeja.

Both batsmen compiled a 113-run stand at the end of the day’s play which ended on Day 2 eight runs later, on 121.

But, it’s what the duo did, consolidating in the middle when it most mattered that should remain the big story.

Shreyas Iyer on his part doing what he could have done best. Standing tall in order to avert a batting crisis with, lest it is forgotten, Rahane and Pujara back in the dugout.

Displaying the kind of brave batting Shreyas Iyer is much too familiar with. The man who’s already a scorer of 813 ODI runs, and 580 T20I runs in a short span of time proving his worth in Test whites.

A century, truth be told, has now proven itself to be no less momentous a feat as the many that shall hopefully occur from the bat of Shreyas Iyer, provided he’s persisted with and isn’t discarded like some used cartridge or bullet from a firing machine.

What worries one, the impassed Indian cricket fan, is to see careers that began on a promising note and didn’t go anywhere.

Who can forget Karun Nair?

Who can forget the promise Unmukt Chand was to have been for India?

Think that’s all? Then there’s Prithvi Shaw, the very-talented and already-vulnerable-to-getting-out-to-a-poorly-executed-stroke on one occasion too many.

But in Shreyas Iyer, there’s hope. More so with Dravid watching the proceedings. One feels if things do fall out, then there’s someone responsible who’ll ensure they don’t.

That, at least, in the current mix there’s a confident-looking Test cricket-newbie that can deliver goods if backed properly and made to feel at home in the Test whites. 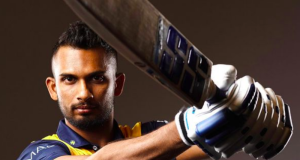 Abhishek Srivastava - January 11, 2023
0
Take a glimpse at the international career record of Dasun Shanaka and you’ll not find anything extraordinary. There are number of cricketers...