After seven disappointing summers, including two grand finals, where they ended on the losing side, Perth Scorchers finally lifted the Women’s Big Bash League trophy on November 28 with a 12-run win over Adelaide Strikers at Optus Stadium.

Perth Scorchers, the Women in orange were the clear standout team of 2021 WBBL after finishing at the top of the league table and winning directly through to the home final. They thoroughly deserved to be crowned the best team in the Women’s Big Bash League 2021.

In some ways, the big moment for Perth Scorchers was also special. It came in front of 15,511 people, the highest-ever crowd at a standalone WBBL contest. The battle was intense as one of those teams came in the final on the back of three straight victories, including Eliminator and challenger, while the other ended at the top of the points table and directly got a ticket to the final.

There was the Adelaide Strikers’ 26-year-old first-year captain Tahlia McGrath fighting it out against the Perth Scorchers’ 32-year-old most skilled and experienced captain Sophie Devine.

Apart from these two, there was one more face-off which was the most awaited as the star all-rounder of Perth Scorchers was going to face her wife Dane van Niekerk, who was playing for Adelaide Strikers.

The Women in orange have been very impressive throughout the tournament, having won nine of their 13 matches (including two N/R matches) and finishing at the top of the points ladder.

A season where, true to her excellent standards, she was brilliant season with the bat. The duo’s contribution with the bat in almost every match was one of the reasons why they played with unparalleled consistency throughout the WBBL in 2021.

Coming to the final, Marizanne Kapp, who had been sick all week, emerged akin to the phoenix from the ashes. The star performer for the Perth Scorchers, “Kappie” played a match-defining knock; an unbeaten 31 off 23 balls, which was followed an impressive start with the ball.

Kapp finished with 1-25 from her four overs, with those figures including a maiden against her wife and Strikers opener Dane van Niekerk (6 off 13 balls).

Having been put in to bat, Perth Scorchers made a smooth start through openers Devine and Beth Mooney (19 from 25) before a 52-run partnership was halted by McGrath (1-14) in the eighth over. Later, thanks to Kapp’s vital quick knock, Scorchers managed to put a competitive score (146/5) on the board at the end of the scheduled 20 overs.

It looked like the total, beyond the reach of the Strikers right from the start of their innings after they were reduced to the second-lowest powerplay score of the tournament.

They reached 2/16 after six overs, needing 131 from 84 balls after Marizanne Kapp finished her first spell with figures of 0/2 from two overs, the most crucial two overs of Scorchers, who were defending 146.

Adelaide needed 36 runs off the final three overs, and they fell well short at 6/134 at the end of their 20 overs despite the best efforts of Madeline Penna (30 not out off 21 balls).

One of the most iconic moments of Scorchers vs Strikers was witnessing a wife-versus-wife face-off where Kapp, the player of the match, bowled a maiden to her partner, Dane van Niekerk, without getting her out.

“It was a terrible week for me, I was ill, couldn’t get out of bed. I don’t think I deserve this, the women there, deserve it, it was a team effort. So odd, it wasn’t easy, she is a fantastic player, knows me so well but happy to be here [on facing off against her wife – Dane van Niekerk in the final],” said Marizanne Kapp in the post-match conference.

But having said that, the win for Perth Scorchers is more than a win for one franchise. It signals the ultimate triumph for WBBL on the whole. And that’s not only down to the fact that there emerged a side to take the game away from the biggies- Sydney Sixers and the Renegades; but the very fact that a team that may not necessarily have been considered poised to go all the way, made it count. Through rigour and not to forget- through perfect team spirit, which is also the DNA of the WBBL: the coming of one and all together to make cricket win. 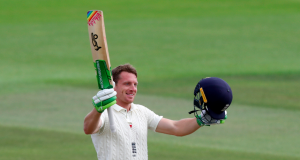