Everything you hear about New Zealand is true and guess what, it’s opposite is also true. They are the quiet achievers of the sport. But even then, their achievements make the loudest sounds, the decibels far more outreaching than the shenanigans of some of the sport’s most hyped teams. The 2019 Men’s world cup finalists. Winners of the ICC Test championship.

That’s not all; they are the underdogs of the sport. But, they also have players who can challenge the biggest of opponents.

But what you also need to hear and probably will, in the days to come, is a newfound reason that makes New Zealand what they are- a side minus big names but one armed with necessary talent.

Probably the only thing that was widely known a few days back and that too, thanks to social media chatter, was how Rachin Ravindra came to be known so.

That he has been named after Rahul Dravid and Sachin Tendulkar became his intro line.

But it’s what he did on the fifth (and final) day at Kanpur’s Green Park stadium in that quintessential quiet, unassuming Kiwi fashion that will define him for quite some time.

For someone whose big ticket to the game was always left-arm orthodox, something that didn’t quite fetch him the returns he so would’ve liked in his debut game, it was batting- and batting studiously- that made Rachin Ravindra a headlining material.

A headliner actually because one doesn’t really score headlines by scoring the 18s or 20s or 30s in Tests. Unless, of course, when you are a first-timer in Tests as is Rachin Ravindra, one whose patient handling of the very foxy Indian spinners can defy a team like India.

Which is what Rachin Ravindra did so beautifully, painstakingly and not to forget, patiently as he helped the Kiwis author a 1-wicket draw, nothing less than a heist since the odds were heavily stacked against their favour.

With Ashwin and Jadeja, seven wickets between them, closing in on a New Zealand that found itself being encircled by a pride of lions, one man ensured they won’t become a sorry-looking prey.

Credit must also go to Ajaz at the other end. But the lion’s share of praise for being there for as long as he did, and mathematically speaking, batting for fifteen overs on the trott, belongs to Rachin Ravindra.

On a fifth day wicket where the ball kept dangerously low and where none came to his rescue to forge a stand he seemed so capable of making, Rachin Ravindra soldiered on.

India tried everything- the carrom ball of Ashwin, the one that nipped away from the left-hander with assistance from the pitch from Jadeja. But Ravindra stayed put.

It’s often said that the greatest of cricket’s heroes have been birthed amid adversity. Ditto for Faf in 2012 in Australia in that glorious debut effort that salvaged a draw for his Proteas. Same for Roston Chase against India in 2016, in a rain-assisted Jamaica Test that helped his Windies forge a draw.

And now, this lone hero, not to mention, an unlikely one for the Kiwis who fought on with the same intensity that Tom Latham had.

Taking over from where another symbol of Kiwi stoicism had left the battle. Unfinished. Only to be finished in the end by a talent who proves, as have many before him, that if they come to face it, even the tailenders can get the job done.

Great batting, young man. Welcome to Test Cricket. And thank you for making us believe that it is thriving, all over again. 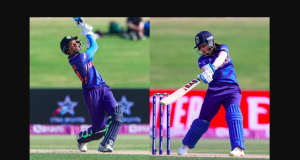 Chandhana Gogineni - March 6, 2022
0
In a line up that has dazzling batters of the class of Mithali Raj and Harmanpreet Kaur, what...