2 decades. Break that down and it’s 20 years. Think of it seriously and you realize it’s twenty long years. A lot, provided one thought about it, has happened in such time. More specifically when you put a West Indies context to it. Herein lies a catch. When you think of the West Indies twenty years apart and examine them from the perspective of Sri Lanka where they presently are, you find out something interesting.

The present day team led by Kraigg Brathwaite that lost 2-0 to Lanka with its humiliation complete on December 3, was just not able to put any firm resistance whatsoever. No two ways about it.

Though that wasn’t the case twenty years back in the day even as the series was all lost coming to a sad end on December 3, 2001, to be precise.

What differed from then and the present day, however, was one man. The man the world nicknamed ‘The Prince.’ The man known as a certain Brian Lara.

A few hours back, as one saw the defeat endured by the West Indies on Day 5, it was bitter to see the likes of Hope, Chase, Mayers, Holder and Bonner failing to put on a rescue act.

But as the West Indies lost (Third Test, Colombo) to Sri Lanka by ten wickets back then, there was massive gladness that there was Brian Lara at the crease.

And that, frankly, proved to be the differentiator between the two sides. The artist, the skill and one legendary outcome.

For Brian Lara was the very man, whose batting exploits led to no fewer than 688 runs amid a royal hammering West Indies suffered at the hands of the Jayasuriya-led side.

It is therefore, interesting and important, to examine as to what might have Brian Lara done to soar to such glory in the very series where his team was roasted, despite having Gayle, Ganga, Sarwan and Hooper in it.

But as it often happens, there rests a challenge at the heart of every big achievement and in Brian Lara’s mighty peak down in Sri Lanka, there remained a big problem. Prior to arriving in the island nation, the Trinidadian from Fatima College found himself in all sorts of issues. A growing girth, such a difficulty for any athlete, was only one fo the challenges in Lara’s journey.

There was a concern in his form, and more importantly, that technique- rusty at best. This was evident by what he had gathered in 2000: 9 Tests, 497 innings and an average that wasn’t even 30.

Realising the clamour around him to alter his cricket, reshape his batting and do something somehow was growing louder than before, Brian rushed to Sir Sobers. One of the under appreciated true stories of West Indies, it was Sir Sobers’ courageous words and words of motivation and great advice that offered Lara the light he so desperatley sought.

And the rest, as they say, is history; something that even today, is looked at as one of the great tales of cricketing turnaround in the Caribbean with a great legend of the sport reclaiming his lost throne as the world’s best batsman.

But then, how did Brian Lara achieve all he did back in 2001? Is there probably a lesson in his batting and fighting spirit for Brathwaite’s current team that found itself in much decay having been tested to the zenith by an unforgiving Sri Lankan spin attack?

Well, if you love the West Indies, you already know the answer.

Truthfully speaking, in any sport, champion players are always under tremendous pressure to deliver for their team and fans. They themselves say that they relish such expectations, because it inspires them to perform every time they go out in the middle of the contest.

This was, for starters, Lara was inspired to revive his game in 2001.

However, it’s fascinating to remember that Brian Lara broke two long-standing batting world records in 1994, which immediately made him the superstar. But his astonishing successes in a short span of time put huge burden on him to perform in every game.

But back in 2001, Lara would remember that the massive contests he eventually fought his way through against Sri Lanka would see none of that slacking.

Yet, it’s only important to note that all wasn’t well for the Prince. Brian Lara had skipped the home series in 2000 and when he was back in the team for England summer, there was speculation he was going to retire. All of this eventually made his plundering of 688 runs against a Vaas and Murali powered attack even more jubilant.

There was added pressure in that the West Indies great Colin Croft too had said that this was Lara’s time to redeem himself or it was all over.

The first Test got underway in Galle and Brian started cautiously against Murali whom he was playing in a test match after a gap of five years and in these years, Murali had become a very dangerous bowler.

So pressure was on Lara, but he looked determined and his innings flourished later on. By the end of the day’s play, he was unbeaten on 117 to announce his comeback. On Day 2, he got out for a superb 178 and in the second innings, looked poised for another good one.

But he managed just 40 and Windies capitulated to hand Lanka an easy victory. Make no mistake for when Murali, then at his peak, would finish an over, Vaas, also in his prime, would be unleashed over the West Indies. But Brian Lara never bowed down.

Lara’s performance proved he was a genius and a mentally strong bat who had it in him to overcome any hurdles caring little in the process that the more he tried out there, the little did his team offer any modicum of support.

In the Second Test at Kandy, Brian Lara looked even more confident against Murali and played some breathtaking strokes against the off spinning great, much to the delight of his fans. 74 and 45 were his returns on a turning track. There was drama too: the third umpire wrongly adjudged him out in the second innings. That must have hurt.

But the Prince moved on, as do greats like him.

In came the Thirst test at SSC Colombo and Brian Lara was in full flow. He dominated every bowler, never wasting an opportunity to score.

The technical glitches prior to setting afoot in Lanka were now adjusements. The backlift wasn’t as high and Lara was playing more on the frontfoot and even slightly outside the crease if one noted.

The main threat, Muralitharan, was beginning to look clueless against the Prince. The more turn he generated, the more Lara swept.

The more angles Murali explored in a bid to become mischievous, the more paddle sweeps would Lara play. Not just flamboyance, if there was ever a series where the left hander demosnstated dexterity and the art of toying with spinners, then this was it.

The hunger to go big and focus for long bouts of time had returned.

Brian Lara scored 221 in the first innings and would follow it up with an emphatic 130.

And in being 132 all out- sad, horrible, hopeless even- we have the West Indies’ eleven.

But even huge scores by him in the series couldn’t prevent his team from a 3-0 defeat. That dampened the spirit of Brian Lara, who truly gave it his all.

Despite achieving his goal of getting back his Test average to 50 by scoring 688 runs in three matches, it was all he ever could do.

He looked sad while receiving the man of the series award and expressed his pain that these runs were of no value since the team didn’t win at all.

That’s what champions do. That’s what legends are made of. Of guts and glory. But also aware of the bitter realities of sport that at times even their best isn’t enough. And yet, they do their best, putting everything on the line as did Lara, who came time and again, in the way of Murali and Vaas devouring his West Indies.

Never forget- 688 runs from only 6 innings, away from the Caribbean shores and against two Lankan legends.

But then, what if Lara had not tried in the first place? What if Brian Charles Lara had not attempted to produce spellbinding magic on the wicket as only he could?

Taking a cue from the legend, is the present day side even trying or trying that hard? Is there, therefore, a lesson in how Lara persevered and at least, sought out to correct the wrongs to try everything in his might? 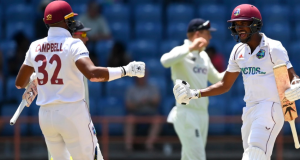 Dev Tyagi - March 27, 2022
0
No the West Indies aren't on top of the World Test Championships. They haven't whitewashed anyone. Moreover, the...