It was day four of the first test and the game was underway in its third session. The world was witnessing a cracking battle between a bunch of lions who were invincible in their own den and a group of tigers who were committed to create history.

Leading by eight runs with eight wickets in hand in their second innings, New Zealand were going strong with the experienced Ross Taylor and the talented Will Young forming an outstanding partnership of 73 runs, battling for almost twenty-nine overs in the middle. But they didn’t have an iota of idea of what was coming their way when the Bangladesh captain Mominul Haque asked Ebadot Hossain to bowl the fourth over of his spell despite conceding thirteen runs in the first three overs.

The hosts could very well see the dark clouds of defeat wandering over their head in their own conditions for the very first time in quite a few years by virtue of this sensational spell of seam bowling. If this wasn’t enough, Ebadot rattled the stumps of Ross Taylor in the second delivery of his first over in the next morning and dismissed Kyle Jamieson an over later to hit the final nail in the coffin.

The winning runs were scored by none other than Mushfiqur Rahim and New Zealand were defeated in a test match in their home for the first time in almost five years. The winning streak of thirteen matches was finally terminated and the world was hailing one man, Ebadot Hossain.

Ebadot’s spell was the principal reason behind Bangladesh winning their first ever game in New Zealand across formats. But his speech that followed his on-field heroics was like icing on the cake. The essence of that speech was the belief he had on himself, which is the most powerful weapon to emerge victorious in any battle in the battle ground of life.

Where does this belief come from?

The Ebadot Hossain we know now was once aspiring to go pro in Volleyball. But as they say, ‘Only a goldsmith can scratch gold from the darkest mines’, his talent of handling the red cherry magnificently was discovered in a scouting session and he was promptly called into a training camp at Dhaka. His journey of gradually becoming the spearhead of the Bangladesh pace attack from that trial has been nothing short of exceptional. Although he didn’t have great numbers owing to the fact that he had played most of his tests in the subcontinent, where the pitches are the least conducive for seam bowling, he seemed to have learned to dream and believe from his journey itself. The dream of defeating the WTC holders in their own den was realisticized in the most convincing manner due to the belief that he had on his abilities.

Despite being a late bloomer, Ebadot has had the impetus he needed to propel himself in order to become one of the best seamers in the history of Bangladesh in the form of the success he had against New Zealand. As he said in the post-match presentation, his learning curve is gradually increasing day by day under the watchful eyes of Ottis Gibson. With age on his side, he can only improve from hereon. The rise of Ebadot Hossain is certainly going to inspire thousands of kids in the cricket-crazy nation. A soldier both on and off the field, may Ebadot continue to prosper and make Bangladesh cricket reach new heights. 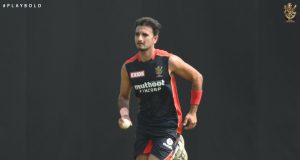 IPL 2021: Harshal Patel, A Majestic Wicket-Machine In The Purely Passionate...

Ashish Kumar - October 1, 2021
0
Harshal Patel, the leading wicket-taker in IPL 2021, has been playing a tournament to remember for a long...