Warne was not just a cricketer; he was emotion ready to flow, an anger ready to burst, a joke ready to be cracked and a magician ready to weave his magic. He was a once-in-a-century player, one of the greatest sportsmen to have ever played any kind of sport, and a man respected by his fierce opponents. He leaves behind a legacy for generations to follow!

I have never found writing a cricket article so hard in my six-year career. Apart from being emotional for losing a hero and a childhood idol, it’s hard to sum up what Shane Warne did to the sports he played for almost two decades, in just an article.

I started watching Cricket in December 1991 during India’s tour of Australia but it was during World Cup of 1992 that I fell in love with the game, thanks to Martin Crowe, however it was until Australia’s tour of Pakistan in 1994 that I got accustomed with the rules of the game. Then came the Ashes of 1994, I was rooting for England and my younger brother Australia, we both have an Ashes kind of rivalry whenever Ashes used to take place in the 1990s.

He was Shane Warne’s number one fan and had imitated the action whenever we used to play cricket. On the other hand I had Darren Gough, Devon Malcom but I used to admire Warne though not openly, it was just like English fans who used to admire Warne but never admitted openly because he was the main reason why England looked so miserable in the 90s. Before that Ashes he had taken 18 wickets in Pakistan and had almost won the series single handedly, with some luck Australia would have won the series.

29th November 1994. The last day of the First Test at Gabba, where Warne took 8-71 and destroyed England. It left an everlasting impression on me; it was the day when cricket became a passion for me. I still never disclosed my admiration towards Warne. My brother and I had the same kind of competition and banter generally found between an Australian or an English fan. The Ashes was won 3-1 and the most interesting aspect was Shane Warne saving the Sydney Test with the bat, that was the most disappointing moment for me as an English fan.

The most fascinating aspect, however, was that we never had cable tv at home in those days so we had to get all the news from the newspapers, our only source to know what was going around in cricket.

By mid-1995, Australia had conquered the West Indies and emerged as #1 Team and Warne was instrumental in the series win. He, however, was more eager to take on Pakistan later that summer because of controversy that had erupted regarding the Match Fixing scandal. When he got Malik out at Gabba in 1995, it was depicted as a proper justice done by the Australian Media.

One of the most impressive aspects of Warne’s personality was that he never stopped believing that he couldn’t win. The desire to go hard at the opposition and to continue to persevere were hallmarks of his personality.

The desire to win against all odds was instilled deep inside him right from the beginning. When Greame Hick and Graham Thorpe were blazing at The Gabba in the second innings in the 1994-95 tour, Shane Warne took the ball and sliced through the English batting line up.

Shane Warne had an aura around him, whenever he used to come into bowl, the players and spectators sensed the theatre he used to build around him, the tricks in his bags were exhibited as the batsmen and the people around him used to go spellbound. The last ball of the Sydney Test of 1995 was an example how he used to play with mind of the batsmen.

The ball he bowled outside leg stump was left by Basit Ali only to see it pass between both legs and crash into the stumps.

In spite of Australia possessing a high quality attack, he was the go-to man for Mark Taylor. Warne used to bring high octane energy to the encounter. The semifinal of 1996 Wills World Cup was an example of his genius when he helped Australia win an almost lost encounter.

Warne had the ability to make things happen, his dismissal of Shivnariane Chanderpaul at Sydney Cricket Ground in 1996-97 series was one of those dismissals which sent panic waves in the opposition camp. Carl Hooper standing at the non striker’s end was surprised how the ball castled the stumps as he looked in dismay.

But in spite of all his genius, Warne had a difficult time too. His failure on the 1997-98 tour of India, the subsequent shoulder surgery and then being overlooked for Stuart McGill, he had some of the toughest days between March 1998 to May 1999.

But, he was a fighter to the core, his spell in semifinals and finals of the 1999 World Cup could be termed as one of the greatest ever in 50-over cricket. He helped Australia win the 1999 WC.

Shane Warne had the potential to become a great captain but Cricket Australia was more reluctant because of the controversies surrounding him. His leadership skills were quite evident in the matches in which he captained Australia. In the Ashes of 2001, Warne picked 31 wickets at 18.70 and bowled marathon spells, especially the one at Oval where he took 7-165 in 44.2 overs.

Warne had always been good in stunning people, it never mattered whether it was on the ground or off it. In 2003, he was banned for one year before the start of the World Cup for taking banned substances.

A number of experts announced the end of Warne’s career, it might have been for an ordinary career, but Warne was a cricketer made of extraordinary substances, he not only returned but he produced more magic tricks from his bag.

The penchant to produce the flipper, the googly- he had lost nothing of it.

On the Sri Lanka tour in 2004 he took 26 wickets and helped Australia win the series 3-0, in spite of trailing in all the three Tests in first innings. Later that year, he bowled Australia to a series win in India, their final frontier.

Warne never learned to give up, no matter whatever the situation. It was never over till the last ball was bowled. In 2005’s Ashes, considered to be one of the greatest of all time, Warne almost won the series single handedly. At Trent Bridge where England was set only 129, Warne made them sweat for every run , he believed England could be stopped. Even at the Oval, he gave his best to ensure that Australia didn’t lose the urn but unfortunately it ended in his only Ashes series loss.

Yet, at 36, here was a trailblazer who affected 40 dismissals.

He redeemed himself next year with a 5-0 series win in which he picked 23 wickets and by the end of the series, bid adieu along with Justin Langer and Glen McGrath  with 700 Test wickets to his name.

Warne’s contribution to the sport can’t only be measured in terms of his records, but by the aura he created around him; he was a theatre as also an institution in himself. A fierce competitor on the field but a great friend off the field. Someone who didn’t feel insecure about imparting the tricks of the leg break to its other practitioners. Someone you’d go to for a handy advice and would never come back disappointed.

Shane Warne was the first to admire you if you played well and was ready to promote the youngsters who needed a guide.

Warne’s ensured his legacy would live on and transcend generations for as long as cricket is played. He would live in the soul of this game and in the hearts of the people as one of the truly greatest who ever played.

An achiever. A trier. And lest it is forgotten, a passionate pursuer of excellence.

  In 2000, Warne was selected by Wisden as the only bowler among the Five Cricketers of the Century .

  The Second highest wicket taker in history of the game with (708) wickets.

  Only second cricketer to have 1000 International wickets beyond Muttiah Muralitharan

  17 Man of the Match awards , the third highest in history of the game. 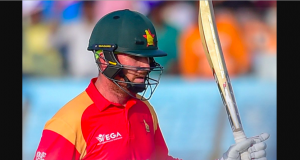 The Mighty That Didn’t Crash, But Left Gracefully, Albeit With Pain:...

Abhishek Srivastava - September 14, 2021
0
For over seventeen years, Brendon Taylor has been a mainstay of Zimbabwe Cricket. He...