On March 5, 1995, Eden Park lit up in the twilight hours as the crowd and country’s icon had returned. Martin Crowe entered the fray at the dismissal of Darrin Murray as the country stopped to watch a hero bat once again in whites. The anticipation was huge and just; the right hander returned after a gap of two years on home turf. Among thousands watching live proceedings on TV was a boy hooked onto the game whilst being 700 miles away, in Wellington. 27 years later, the same boy, now a man who accomplished plenty of feats for his nation was offered a fitting farewell by both countrymen as well opponents as thousands turned up to watch their true hero Ross Taylor walk into the sunset!

Ross Taylor celebrated his eleventh birthday on 8 March 1995, the day when his mentor- the great Martin Crowe- last played a Test inning on home soil. A few months later, he was forced to retire due to a chronic knee injury. Crowe was a legend to all, a hero to many, and an inspiration for young Ross Taylor, who says, it was the NZ great who inspired him to take to this great game. Little surprise then that it’s because of this reason that Ross Taylor regards Crowe as the greatest batsman to have played for the country.

As a young Samoan kid, Taylor was quite interested in cricket, unlike his counterparts that preferred Rugby. His talent was identified by Dermot Payton, Wairarapa farming scion who in his free time works on searching for new talents. Payton was impressed by the power-hitting ability of Ross Taylor when he saw him first as a 12-year-old in mid winters of 1996. He says “I would put my life in his hands,” he recalls. “He was only a kid, but man did he hit the ball hard. I stopped suggesting straight drives after a while”

Payton was asked by Central District Association to mentor this child prodigy from Masterton. He was impressed by what he saw of him, “His shot selection was impeccable. Full and wide, cover drive. Full and on middle and leg, on-drive. Short and wide, cut. You could tell he was a talent. He was just so natural. It wasn’t a case of rebuilding him or pulling apart his technique. It was near perfect.“

Taylor played his first Test in 2007, which seems ages ago. Back then, Cricket was lot different than today, but New Zealand cricket was about to go into a serious transformation mode- their first since (1990-1995), when Sir Richard Hadlee, Martin Crowe, Ian Smith, John Wright , Andrew Jones and other seniors who’d built a successful team of 1980-1992 retired. This time the loss was even graver with Stephen Fleming, Nathan Astle, Shane Bond, Craig McMillan and Mark Richardson retiring from the game.

A new generation of talents were needed to step up the game, restart the process and Taylor answered the call of duty with humility.

Within next three years from 2008-2011, the side was under serious transition and Ross Taylor, along with Daniel Vettori, shouldered the burden of the young team’s expectations.

His twin hundreds against England in 2008, one at home and one in England showed his class and made him believe that he belonged to the Test level. His hundred against Pakistan in 2011 World Cup ensured he was there among the best in world.

In 2011 he became captain of a young team, within a year he led New Zealand to victory first in Australia, their only one in last 35 years in the country and then in late 2012, he led them to a victory in Sri Lanka, New Zealand’s first in the island since 1997, during this Test at P Sara Oval he played a captains innings of 142.

A month later though things went horribly wrong when the captaincy controversy embroiled New Zealand Cricket, he was accused of being a leader who failed to have proper communication with his teammates. But Taylor has always been upto the challenges which have been thrown at him. He was tagged as a dasher who could prevail only in white ball cricket but he defied everyone, today he is not the highest run getter for New Zealand but he is the most capped player for New Zealand in the longest form of the game with Daniel Vettori.

When doubts were raised that whether he could return after the captaincy debacle, he bounced back strongly to become batting mainstay for almost a decade. In 2016 when he almost lost his sight due to problem with his eye, his career looked almost over but he once again returned with a bang. He plundered runs after that and scored 2755 run in 57 Matches at astonishing average of 64.06 in fifty over format.

Amid his farewell discussion, Ross Taylor remained quite cool, he maintained that retirement had not yet synced in a few more ODIs would follow his final Test match appearance against Bangladesh.

What makes Ross Taylor a cricketing standout is that despite the changing vagaries of the game and his own team’s massive change in fortunes, he remained the same focused simpleton who spared little for anything else other than the musings of the bat.

For almost a decade and a half, he stood as the pillar around whom New Zealand registered some of their most remarkable successes. Deeply involved in building the best team in New Zealand cricket history along with his captain and vice captain, he would be the go-to man for Williamson and Latham and the thinking core involving Martin Guptill.

From 2013 to 2021, New Zealand were engaged in developing a team of cricketers who were arguably the best in their cricket history. And while Brendon McCullum, BJ Watling have retired, Ross Taylor follows an elite cauldron.

During this era, New Zealand won the Test World Cup in form of World Test championship in 2021; a day which could be termed their finest moment in five-day cricket, a piece of cricketing triumph Taylor himself will cherish for time immemorial. The smashing right-hander was at the crease when his country chased down India’s ask of 139, contributing 40 on his own.

He was all focus and stayed put for 100 deliveries.

Though that wasn’t all; during Ross Taylor’s reign as New Zealand’s most stable and experienced bat, his nation appeared in the finals of several major ICC tournaments- think the finals of the 2015 ODI World Cup, the 2019 ODI World Cup finals as well as and the T20 World Cup of 2021. However, disappointment would accompany a team that met travesty despite giving it everything. Yet Taylor, however affected from the inside, kept contributing.

From being a newbie who found himself amid an enterprising pack comprising Fleming, Styris and Bond to being a senior figurehead giving the likes of Conway, Latham, Tickner and Blundell some direction, Ross Taylor’s been a parable of consistency and simplicity.

You’d think of so many who ball tampered, foul-mouthed opponents, and engaged in mind games, but not Ross Taylor who went about amassing each of his 16,000 plus international runs with inherent simplicity putting the team ahead of his ambition.

Which is why there’s little surprise that much like his own countrymen who offered him a guard of honour in the just concluded ODI, understandably seeped in deep emotion, even the Dutch queued up to offer a true great of the game a revered goodbye.

And that’s what success is all about isn’t it when you are admired by your compatriots just as much as you are respected by your adversaries? For all that you did and did with grace, we tip our hat to you, Ross Taylor. 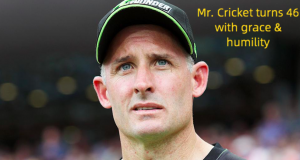 Dev Tyagi - May 27, 2021
0
The left-handers, we hear, are a different breed. Even the term frequently used to describe them sounds attractive- ‘southpaws.’ It’s almost as if a...