For as long as the great game of cricket remains, we shall always remember April 24 as being the birth anniversary of the man who truly epitomises the meaning of the sport itself: Sachin Tendulkar. While well and truly speaking, certain dates will always be about certain players and nothing else in particular, could it be that there’s more meaning to some than we’ve tried to assess or come to know?

While to most of the world and unsurprisingly so, April 24 will be about the greatest modern batsman to wield the bat, it will also, at least, to some who’ve cared to look beyond be about a certain Lo-handre Louwrens of Namibia.

To a team that is finding its feet, so what slowly and steadily in International cricket, Lo-Handre Louwrens brings much excitement and a hope to forge a bright future. And more specifically, if one were to cast an eye on the current spectre of Associate Cricket, then Lo-handre Louwrens offers the promise of youth and just what it can do to bring attention to teams that are so often underrated.

As one of Namibia’s finest current batsmen turns no older than 23, it makes perfect sense to delve into the world of the Southwest African nation’s rising #3 batsman.

But in order to take true cognisance, it’s important to first recollect the year 2016 and just why it meant so much to the Keetmanshoop-born cricketer.

2016 was one of the most sought after and special calendar years in the journey of the white-ball sport, in particular. It was pretty much the year of the West Indies with both men’s and women’s team lifting the crowning glory in the game’s briefest format.

But for a host of other nations that so often escape our busy eyes that only rest with an India and Pakistan, England or Australia, 2016 underlined a particularly big event.

In January that year, a young man was captaining the Namibian side in the-then Under-19 50-over World Cup. Back then, he was merely seventeen. The tournament was to be a launchpad for many a young careers with no fewer than sixteen teams competing for the ultimate glory.

And it didn’t take long for Lo-handre Louwrens to impress. In just their second game against South Africa, circa Jan 31, the right hander lit up Cox’s Bazar with a top-score of 58 (off 97) as he helped his team clear the ropes even as the Proteas gave their everything to stop a struggling Namibia from getting to a paltry 138 needed for the win.

To anyone, a 58 isn’t that huge a score and is barely a few runs in excess of a fifty. Though, in the context of where Namibia were at one stage, and they were 50 for 4, Lo-handre tackled spin and some brute pace of Dayyan Galiem and Ziyaad Abrahams to come in the line of his team’s struggles and the Proteas that were smelling blood.

He was then a number four batsman and someone who encountered a storm that were promising bowling line-ups he was up against. At all this time, he was dealing with the batting vulnerabilities of the Namibian team.

Yet, Lo-handre kept persisting. When his team met England in the play-off for the semi-finals, Lo-handre entered the crease with his side tottering at 9-2 whilst chasing 287 for a win. In the end Namibia only managed 83 but the man who top scored for them was the captain, once again soldering a lone vigil as he made 24 runs as eight others in the side compiled single-digit scores.

In their next game against Nepal, who had, believe it or not, upset New Zealand, Lo-handre Louwrens was at it again; scoring another watchful and composed fifty: a 59. But what stood out about the knock that led Namibia score their highest score in the tournament (225) was that this time around, their captain walked in with the team naught for 1.

This, in effect, offers a great insight into the batsman Lo-handre is; someone who’s bold enough to experiment with his batting position and doesn’t complain if he’s to alter where he comes out to bat.

He’d round up the World Cup as Namibia’s most productive batsman, one who conjured 163 runs averaging nearly 41. The true mark of his capability was that it was in this Under-19 World Cup where Louwrens encountered the likes of Rishabh Pant, Ishan Kishan, Kyle Verreynne, Dan Lawrence and Sam Curran- though little is spared to appreciate that fact.

But bigger moments awaited one of Namibia’s most enterprising batsmen; in 2018, he’d become the first to hit a ton at the widely-watched ICC Men’s World T20 Africa Region Qualifier (C).

On matted wickets that perhaps augmented more pace than what batsmen would’ve liked, not to forget, variable bounce that didn’t make it easy, Namibia’s bat, then slotted in the top order, hung in.

Though 2018 would also be the year that would unfurl, needless to say, one of the biggest headlining material in the Namibian’s cricketing sojourn so far.

In the contest against Kenya, Lo-handre Louwrens struck an imperious century, scoring 114 of the 180 Namibia posted in a game of staggering blows and paltry team totals. That 70 of his runs came by virtue of big hits to the fence spoke of his adaptability and the power to change gears.

But the thing that stood out most was that this time around, Lo-handre opened for his team, instead of coming in the middle order.

And yet, with much respect, what earned the biggest headlines in press and digital media were the ostentatious batting performances of a Gill and Shaw; little was spared to acknowledge, let alone appreciate the heroics of some of the World Cup’s more underrated performers.

The Namibia we see today is a side growing in confidence. Just last year, in the T20 World Cup, the African unit played some pleasantly enterprising games, going as far as challenging New Zealand for a win, beating- unless you already forgot- Scotland and Ireland.

With players like Gerhard Erasmus, Zane Green, and the irrepressibly talented David Wiese, time has come for Namibia to forge a stronger identity for its own course in the sport.

While Namibia will face nerves as they move along in this growing journey for they’ll be tested as they play much stronger sides in an Afghanistan, West Indies and Bangladesh in the times to come, there’ll also be respite that in talents like Lo-Handre Louwrens (2 international caps already) they are in safe hands. 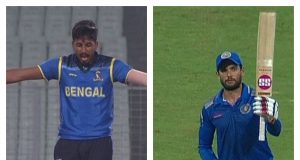 Fine Talents From The Domestic Scene That Stand A Big Chance...

Robin Rounder - January 31, 2021
0
Talent- there's plenty of it. Skill and application-both accompany it. Anyone wondering just how often the phrase-"the Indian team is so strong because there's...