Most of us who saw the West Indies in the 2021 T20 World Cup will remember the two-time world champions for one thing and one thing alone: abysmal failures.

Incompetent with the bat, sluggish with the ball and waywardly in the field, the West Indies were a frail shadow of their (famous) past selves. They may have been a force to reckon with in the past, notably the 2012 and the 2016 World Cup editions, but in 2021, they lacked the fight and appetite for a battle.

In here rests a calamity whilst passing judgement on their campaign. While disconsolation will always define their 2021 performance, little will be spared to focus on the man who continued to fight and show resistance.

When a young man made it count in the World Cup

The only man who performed when the chips were down, albeit not with the bat, the famous Windies symbol that draws packed crowds but with the white-ball.

Little was said about Akeal Hosein, who turned 29 today, given his impressive T20 World Cup showing and surprisingly hardly anything made its way into mainstream media where the team he represented was bashed- and rightly so.

That’s when Akeal Hosein was, quite clearly, not only the most successful of all West Indies bowlers but also the most economical.

Perhaps we didn’t note that all that West Indies managed to pick upon the completion of their games in the last World Cup were sixteen wickets. Hosein picked 5 of those.

Doing simple math suggests that it’s nearly a third of all wickets.

He’d end the tournament with a bowling average of 25 and an economy that didn’t exceed 7. In the contests against England and Bangladesh, he’d go exactly for six an over, whilst going for six and a half an over against South Africa.

Apart from the only game where he went wicketless, which was against Bangladesh, Hosein opened the Windies attack in three of their five games. Remember, he was playing his maiden world cup and had little experience of countering pressure that stems from such a huge occasion.

But rarely did he put a foot wrong, literally speaking, conceding not a single no-ball and just three wides in the mother of all T20I tournaments.

Though what stood out and perhaps not so famously for Hosein was that his finest moment came during the lowest point for his team.

In their campaign-opener against England, where the defending champions were bowled out for an unspeakably horrific 55, Hosein kept up the ante of pressure in what was to have been an easy ride for England; he’d take two of the four wickets that would fall.

Both the dismissals were affected by excellent return fielding of his own bowling.

But again, none of what Akeal Hosein has done so far in International cricket has ever come easy.

The last minute trip to Bangladesh

Probably it won’t be too dramatic to suggest that had key figures from the West Indies cricket- think Shai Hope, Jason Holder, Kemar Roach, Roston Chase and Kieron Pollard– not refused to travel to Bangladesh in 2021, Akeal Hosein may not have been picked for the bi-lateral series.

But it’s to West Indies cricket’s good fortune that they picked the simpleton from Trinidad to board the flight to the sub-continent in what was essentially a last minute B-grade ensemble to tackle a side that’s viciously competitive on its own turf.

And just how did Hosein respond in what was to follow? By taking a three-for upon his ODI debut at the Shere Bangla National Stadium.

Not that he’d have savoured what was a fantastic maiden appearance in international cricket that yielded figures of 3 for 26 from 10 overs; his team would go down by six wickets before being whitewashed in the ODI leg of the tour.

But Hosein had made his mark, instead of just making his presence felt.

His useful left-arm orthodox spin ambling into the batsmen, forcing them to play a shot so as to create wicket-taking opportunities.

And that’s essentially what Hosein’s craft is all about.

Armed with a clean and simple bowling action, the Port of Spain-born is known for bowling spin at a notably higher speed whilst channelising the movement off the pitch.

What we’ve seen so far- and we’ve seen little for he’s only played 34 Internationals- looks good and promising. Hosein is both unafraid to toss the ball up and fire in the quicker ones to puzzle batters.

To a team that can so easily go astray or seem lacklustre often seeming minus a plan, Akeal Hosein’s inclusion into the scheme of things rescues the West Indies from the banalities of bowling.

Importantly, he seems to bring that one crucial missing element into their white ball game that fans desire but hardly see: discipline.

He’s no mug with the bat.

In the second (of the five) T20Is hosted by West Indies earlier this year, England ran into Hosein’s bludgeoning bat.

With 30 needed from the final 6, he fired three sixes and two fours against Saqib Mahmood.

For someone who’s considered a front line spinner for his team that Akeal Hosein ramped up 44 from just 16 offered massive hope to his team that they now got a spinner, who much like Narine, could play attacking cricket like established hitters. 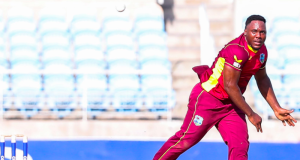 Marissa Chandler - July 31, 2022
0
A hard-hitting batsman who hits monstrous sixes. A bowler who can clock speeds in excess of 140kph. A Jamaican. Reading those three...