“For conspicuous gallantry and devotion to duty while commanding a patrol. Having obtained valuable information, he withdrew his men from a difficult position under heavy machine gun fire. He displayed the greatness coolness and determination: 2nd Lt. Frederick Luther Fane!”

The date is 18 June, 1917. The lines are written very clearly in what they intend to communicate albeit in tiny font that you can barely read upon zooming. The London Gazette, which happens to be among the official gazettes of the government of the United Kingdom, has thrown light on an effort of sheer bravado.

The effort is in recognition of redoubtable service to the majestic Kingdom during the course of the First World War and the reward for exhibition of such courage is the Military Cross.

Now if you happen to simply Google the term or phrase Fane, then the meaning you will get is a temple or shrine. Though what’s rather interesting is that there was someone visiting whose efforts, both on the battlefield and the cricket pitch, were akin to visiting a shrine of courage. His name was was Fred Fane and he gave his active lifetime to the service of England.

That was first on the cricket pitch and later, in the bloodied battlefields during WW1.

Modern English Cricket is replete with astonishing batting performances. If you were to, for instance, puzzle anyone on common cricketing trivia by asking the names of English captains who hit a Test century, it wouldn’t be such a tough one to answer. It’s quite possible to cite popular names.

Think Graham Gooch, Michael Atherton, Alastair Cook, Andrew Strauss, and Michael Vaughan. The list is long; there’s Joe Root, Peter May and many others in there as well.

But if you were to quiz someone to name the first Ireland-born cricketer to hit a Test century for England, then perhaps it may not automatically yield an answer. Some Googling would be required. That is when you’ll see many resorting to books and factoids and that sort of thing.

Surely, Eoin Morgan would be a definite – and correct- answer but the good looking left-hander isn’t the first one to achieve the feat.

Interestingly, the response to this particular question isn’t some onerous list to remember.

It’s Fred Fane- the one whose exploits were like visiting a shrine of courage and resilience. The very first Ireland-born cricketer to hit a Test century for England, someone who’d even captain what is a world beating side in the classic format of the sport.

In a certain way, it could be argued that Fred Fane would have eventually landed in England anyway despite being born in Kildare, Ireland; his father, Frederick John Fane was stationed with the 61st Regiment of Foot and was a British Army Officer.

But then it’s one thing to land in England because of where your family is based and something quite other to break into the national Test team. Fred Fane played first class cricket for a considerable duration of his cricketing career and even had to suffer the ignominy of featuring in some contests that weren’t given the consideration of being dubbed First-Class games.

For instance, he represented Chatham Garrison, Knickerbockers and Gentlemen of Essex- but none of those turnouts were considered as First-Class.

Yet, Fred Fane was determined and focused purely on moving forwards in his cricketing life. By the age of 20, he was already inducted in Essex, and that too, at a time where the county were to play their maiden Championship.

But the turning moment of his cricketing life, it could be argued, came not before the 1899. This was when he scored his 1st First-Class ton at Grace Road, which is where Leicestershire were bowled out cheaply.

Modern folklore lavishes much praise on Ravi Bopara, Graham Gooch, James Foster, Nasser Hussain and Sir Alastair Cook, all of whom have been star turnouts for Essex in their careers. But little is known and even less written about the man who notched up the first-ever double century in Essex’ history.

That man was Fred Fane and the year was 1899, lest it is forgotten. It was the right-hander’s pleasant strokeplay that enabled Essex to crush their opponents registering an innings victory. It just took him two more matches to score a beautiful 116, this time against Sussex.

It was during this time that Fred Fane even toured the Caribbean and later, Australia. But he’d most impress in New Zealand, wherein he’d score 421 runs, averaging over 52 with the bat. The big call, to the England national team, was the deserving result of years of perseverance.

In 1906, he was in South Africa confronting an opponent that flexed its muscle at the back of its marvelous spin talent. After a forgettable debut game, wherein he scored just one and three, Fred Fane showed grit in the second inning of the Second Test, where he scored a 60 and exhibited strong defensive technique.

But his career was only going to blossom from hereon in. After demonstrating consistency for two straight summers another breakthrough came in the 1907 Test cricket season, a time in history where Fred Fane arguably scored his greatest high in cricket: captaining the English side in the Ashes.

There’s not much known about the WACA hundred, wherein he started the tour with a classic 133 against Western Australia. The only thing would state is wish there were recording cameras that could’ve seen a batsman labelled a good looking player on the front foot tackling the vicious bounce and pace on a wicket that’s been awarded a cult status in cricketing folklore.

Though what must also be said is that Fane’s cricketing sojourn also made run-ins with pleasant strokes of luck, his life being a classic “Did you know” read of sorts. He wasn’t the classic or first rate choice to lead England during that Ashes series actually. But when Arthur Jones sat out of the Sydney Test, in came Fred Fane, the skipper.

At 31, he was of the ripe age to lead a team with the useful first-class experience under his belt. Soon, the moment tagged the most-talked-about in his career could come about and that too, at the MCG. For it was at the cultural home of Australian cricket where a young moustache-sporting batsman would open the English inning along with the heroic Jack Hobbs.

That was Fred Fane in perhaps the most covered or written about chapter of his cricketing journey. It would also be a time where he’d display true temerity with the bat, hanging around actually for a 160-minute stay at the crease for a useful 50.

More notable achievements would follow in the months hence; for instance during 1909-10, Fred Fane, with his unbeaten 25 versus Yorkshire, Fane became the first-ever man to carry his bat in an inning for Essex.

He’d tour again to South Africa during the final legs of his career and ended on a winning note, but was a failure with the bat for the duration of five Tests.

Interestingly, his highest point in his First-Class career came before the outbreak of the First World War: a classic and patient 217 would be struck ever so craftily at The Oval against Surrey. Not that the desire to contribute to England had waned: he’d score a 61 and 98 against the touring Aussies in 1910 but that wouldn’t afford him a place in the Test unit.

He’d continue to be in fine knick, scoring 3 of his 25 First-Class hundreds aged 38. The year was 1913. And it would turn out to be the last time he’d wield a bat before returning six years after to the wicket, aged 44. A career that was growing and had even managed to touch some serene heights was punctuated by the embitterment caused by WW1.

Not that the courageous Irishman would sit idle and do nothing. It could be argued that perhaps why Fred Fane decided to serve England in the war was out of that quintessential spirit to serve, which ran in the family. After all, his father had done the same. The son, therefore, followed suit and not just that, not long after witnessing bloodshed and leading with courage, Fane would be promoted to Captain.

But rather emphatically, Fred Fane’s most inspiring chapter- if not the greatest- came in the post-war period where he returned to First-Class cricket, for which he had nurtured massive love.

He’d not just return but crack a 129 against Oxford University and went on to play cricket until the age of 49.

In a sport where longevity is considered the litmus test to measure one’s caliber, it could be said that Fred Fane authored a wonderful and supremely long run, playing Cricket for nearly two and a half decades. At a time where we find cricketers becoming increasingly vulnerable to injuries and when not, then susceptible to inconsistencies, it’s inspirational to rewind back the clocks to the life and times of Fred Fane. 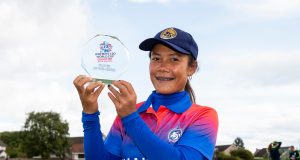 Who Is Chanida Sutthiruang? Why Is Thailand Women’s Team Incomplete Without...

Dev Tyagi - July 16, 2021
0
Chanida Sutthiruang's rise to prominence in her Thailand women's national cricket team is every bit as fascinating as the sight of finding women playing...