Until the end of mega auction on February 13, none of us would’ve predicted Sunrisers Hyderabad would have a terrific run like the one they are having.

Effectively speaking, the Sunrisers Hyderabad picked a team on similar lines of previous seasons devoid of big players and their reputation. It was a team comprising of talented players who were previously given roles in the shadow of superstar players.

They finished at the bottom of the points tally in 2021. This was a team that was in desperate need to undergo complete transformation following their debacle last year.

Sunrisers went through a stringent regime of changes and post that clarity in communication between the players in the camp held the key to its unique comeback into the tournament.

Unit now many plans went right and some failed, but despite all of it, this beginner’s team has shown will and faithfulness to thump its past shadow and rise to the top.

The turn around and the consistency behind Sunrisers has many factors going right, each of them has its own weight in terms of those areas improving match by match.

For instance, Umran Malik compared to his initial matches in this season. bowls consistent and tighter lines, this gives batters restrictive scope from which to attack. A backbreaking speedster, the biggest plus for the Sunrisers Hyderabad is to have someone in their ranks who desires to simply bowl as fast as he can.

Add to that the nature of the format; how badly can a four-over spell affect the physical make up of someone like Umran Malik?

This improvement goes down to much of the process put in by the coaching staff, who’ve worked- and perhaps tirelessly so- to push this speedster to better limits. Forget not that the course of action has included the changes made to his bowling action to attain better line and length. That Malik even touched the record speed of 153.3 against Gujarat Titans, the best by this youngster so far in IPL, was in itself, a feat to marvel at.

The support staff comprises of a diverse group: Tom Moody, Muttiah Muralitharan, Dale Steyn, Brian Lara, Simon Helmot and Hemang Badani. The three of the cricket legends have embraced their roles to shape this team’s future. Something that the players would learn from Muralitharan and Dale Steyn is the consistency with which they were on the top of the game. SRH’s strength is inevitably the bowling department, with these two legends guiding them, more than a plan to outsmart batters, it is more about how each players are fine-tuning and up skilling their talents. For instance, T Natarajan adjusted his length and started to swing the ball both ways, so that he is not completely reliable on the Yorkers or fuller length balls, that he is exceptional at. The evolution of Natarajan and the arsenal he possesses now makes him the most lethal new-ball bowler for SRH.

The batting department is looked after by Tom Moody and Brian Lara. Moody lead SRH to their title win in 2016. Lara’s mentorship is the biggest asset in terms of his astounding experience in batting. This squad is no longer dependent on bowlers to limit the scores for a chase or defend. They have a line-up of quality players who have excelled under the new coaching staff.

Moody’s return to coaching duties has made a massive impact to the team as a whole as the team has gelled well and the leadership has had a free hand to lead the team. Badani who was a sharp fielder himself in the professional circuit will head the fielding duties.

The players have been designated specific roles and the continuity with which the players were given the chances to execute the plans has entrusted players to own such a role. Individual leadership was the massive booster in terms of the structural changes the SRH is still working on. Every player owns their role and is not dependent on any other player to prosper. Each player in the Playing XI has a match-winner and such performances have lowered the burden on experience campaigners like Kane Williamson. The clarity in effectively communicating in terms of the limitations and the strengths of its players and effectively balancing them was the reason behinds its success formula. Pooran and Aiden Markram perfect balancing and controlling acts can pair have strengthened SRH’s prospects in the middle order.

Rahul Tripathi, the heart of this middle-order, is in a terrific form this season. Tripathi’s aggressive stint is balanced by Markaram. who controls tight situations and forms partnerships. Markarm is highly proficient in keeping the scoreboard ticking and accelerate as and when it is needed. They scored 509 runs at an average of 28.09 at a strike rate of 135.10 with eleven 30+ scores struck by them. The trio coming into form post the consecutive losses in the opening matches, has turned the tide for the Sunrisers Hyderabad. In the five matches they have won so far, one among the middle-order trio smashed a boundary or a six to seal the match. This journey of under-performing middle-order to the top is a unique accomplishment in this season.

The dependency on a single player to succeed was clearly not their way of approach, the adaptability during every crunch situations that the players were open to kept giving new match winners for SRH.

The opening pair also had a decent run when the partnership is taken into consideration. Individually retaining Abhishek Sharma in this year’s auctions earned its rewards as he is in a terrific form. He is the highest run-getter for SRH at present; he smashed 285-runs at a strike rate of 131.34. Kane Williamson’s form is a matter of concern, but it may just take a little more game time for him to return to his fluent best. As a captain, Kane is able and has the calming effect on the team as a whole.

You’d feel that this is a team where there’s no kingship and where the entire kingdom is one unified force.

The inclusion of Proteas Pacer Marco Jansen in the bowling attack added more depth to the pace attack. He ripped through RCB batting order when they were reduced to a score of 68. SRH won by 9 wickets in that match. Bhuvneshwar Kumar has also been in great form, he continues to be their best new ball option and he bowls economically and picked 9 wickets so far.

With so many positives and such fineness in form to boot, the rise of this young team was but inevitable. It’s just the sort of thing that makes the IPL a great equalizer. Though, the finest lesson in SRH’s rise as seen this year is that they’ve shown that to punch above one’s weight it only needs clarity in thought and to keep it simple. 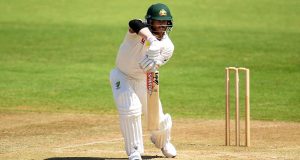 A David That’s Actually A Goliath In Cricket. Why Warner Can’t...

Vedant Sharma - July 29, 2019
0
The difference between writing a fiction and non-fiction story is just that in the latter you know what has happened, and in the former,...