Over the course of his seventeen-year-long career, Brian Lara has been called many things. To legions of fans in the Caribbean that craved heroes after legends like Sir Viv, Gordon Greenidge, Desmond Haynes and Sir Lloyd walked into the sunset, he was a batting demigod.

To those who compared him to the Master Blaster Sachin Tendulkar, Brian Lara was-and still is- the Prince of batting. He was a genius to many of his contemporaries such as Justin Langer, Mark Butcher, Mike Atherton, Shane Warne, and Mark Waugh.

Forget not that Sangakkara still holds tremendous love not for an idol that came from the island pearl that is Sri Lanka, but from the islands much afar: Brian Charles Lara.

But of all the things that one of cricket’s finest entertainers has been called, the thing that stung the most was the term- ‘selfish.’

It first came to light at the back of Lara’s ostentatious takedown of England in the summers of 2004. At Antigua, the left hander, then also the captain, marauded the likes of Flintoff, Hoggard, Simon Jones, Gareth Batty and company to construct a monumental 400 runs.

Though what’s most interesting is that, the highly un-likeable ‘selfish’ tag wasn’t anointed to Brian Lara by any of his contemporaries whom he shook to the core during his whirlwind effort; rather, it came from Ricky Ponting, according to whom Lara should not have gone for his personal record and declared the inning much earlier so as to give his West Indies team a chance of victory.

Ever since then, parallel to the many beautiful garlands of adjectives Lara has been celebrated with, his legacy has also been sullied by this unwanted decoration.

So as the Caribbean master turns 53, time has come to settle the score on whether his 400 unbeaten run knock was actually a selfish one or simply, a case of sour grapes.

But first up, here’s a context!

Great sportsmen show their true mettle when they are really down and out. Or you could say, when things seem to be now or never for them.

Some try their best to redeem themselves, but only a few rise like a phoenix in a way the world has never seen. One such instance that truly epitomised this in my opinion was when West Indies star batsman- also also their skipper- scored cricket’s first quadruple hundred: a 400 not out at the ARG in April 2004 against old foes England.

Scoring mammoth scores singlehandedly wasn’t something new for Lara, but because of the fact that he had done nothing to note about in this very series up to the point of the final Antigua Test, made the occasion noteworthy.

This was no ordinary run of rout for Lara’s team; they were facing the prospect of being whitewashed, a humiliation that would truly tarnish the history of the great cricketing culture of the West Indies. Moreover, with scratchy form and a broken finger, sustained whilst fielding in this very series, Lara was a shadow of his former self.

So before we exercise our opinion, such as selfish, to describe what was truly a monumental effort (which put him at different level among his contemporaries), it’s important to take cognisance of all that Lara and West Indies had endured.

But, then we live in a tough world where you can’t expect everyone to appreciate your efforts. Some former players, most noticeably, those from Australia, criticized Lara for delaying the innings for personal goals.

And that is where we must take into account rational logic and the spirit of argument.

For starters, one can’t denigrate such a huge effort by a batsman keeping in mind that such a humongous record was created for the first time in Cricket. Haters said that had he declared the innings little early and that Windies would have won the match had that not happened.

They might be right, but mere nam calling and opinion throwing won’t suffice. It won’t show the clear picture.

If you look into the stats from this last drawn Test, you will notice that Brian Lara- as opposed to popular wisdom- gave plenty of time to his bowlers to bowl out England twice.

In sports, much like in real life, you’ve got to grab the chances given by the opponents to defeat them. But if you keep on squandering the opportunities, which Lara’s critics have conveniently forgotten, you will always end up on a losing side or in a state of despair.

England were 157-5 at one stage during the closing hours of Day 3, which is when skipper Lara dropped Flintoff at slip; little unlucky on Brian’s part as he pouched the catch first only to spill it amid celebration.

He had only himself to blame. But it’s here where you ought to question- what would’ve happened had Flintoff departed much too sooner than he did?

Nonetheless, resultantly, England survived the rest of the day and ended Day 3 on 171-5. You can say that the hosts, who had put 750 plus on the board ended the day on ascendancy. When play resumed on Day 4, Windies bowlers struck early and England were reeling at 205-7.

At that time, it looked that they would bowl out the visitors cheaply, but the lost chance of Flintoff would come to haunt them.

Andrew Flintoff, the lone fighter was given a reprieve twice in his inning, and he capitalized on missed chances to score an unbeaten 102.

England finally bowled out for 285 just before the tea.

But the dropped chances didn’t become the only detterrant to what “COULD HAVE BEEN” a Windies victory; had Windies had bowlers like an Anil Kumble or Shahid Afridi, who were evidently faster through the air, they might have won the match or, at least, brought the game to its heels.

On the part of their mistakes, England got a chance to prolong their innings. To make the matter worse, the West Indies didn’t have any frontline spinners, something the Brian Lara bashers will conveniently negate. But then it’s something that could have created chances on a wicket, which was flat.

In reality, however, the seam attack West Indies had back then wasn’t anywhere close to the much stronger unit the modern team holds; back then there was no Roach, Joseph, Holder or Gabriel. Lara, the captain had to create chances with Pedro Collins, Tino Best, Corey Collymore.

Collins, if you haven’t forgotten, has a bowling average of 34 against his name and all that Tino Best, whilst aggressive and fast, had in his Test kitty were 57 Test scalps.

In the name of spin, Ryan Hinds, 19 Test wickets against his name, was West Indies’ spinner.

Was this a world class attack that captain Lara could nail down England with?

Though, regardless of the result, one thing is undeniable that if anyone could have scored 400 on that flat docile wicket it would have to be Brian Lara.

Moreover, lest it is forgotten, I want to conclude by saying, “The greatest achievement in the history of cricket is to reclaim a world record after losing it and that too after 10 long years.”

Lara still will remain selfish to the lot that can’t do half the things he did his career: 9 double centuries, cricket’s highest individual score in both Test and first-class formats.

But then how many have we gone on to see make 400 runs, batting for 778 minutes whilst nearly 35 years of age? 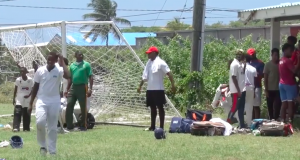 Dev Tyagi - July 27, 2021
0
Cricket in the Caribbean is a part of the islands' history, is steeped in rich tradition and occupies an ineradicable part in the firmament...