A chilly gust of wind blows through the chinars. Its leaves rustle on the frozen ground. An eerie silence descends in the Kashmir valley only till another gust of wind blows. Whoosh. When it runs through, it freezes everything. Much like Umran Malik.

This Jammu and Kashmir fast bowler sends chills down one’s spine for he bowls lightening fast. Umran is consistently pitching the cricket ball above 90 mph in the ongoing Indian Premier League. He, in fact, bettered his record of the fastest ball of the tournament by clocking 156 kmph in a match against Chennai Super Kings on Sunday. 156 kmph!

His coach at Sunrisers Hyderabad and one of the finest exponents of fast bowling, Dale Steyn uttered: “Umran Malik”, when he was asked on Twitter who his inspiration was.

Till 17, the Gujjar Nagar boy had not played any leather ball cricket, it was all tennis ball. His exploits soon became the talk of the town. Cricketers like Ram Dayal and Irfan Pathan guided him.

The 22-year-old’s career has been just like his bowling — fast.

For him, 2021 was a dream year: He earned J&K cap; got a call from SRH team to be a net bowler, all thanks to his team mate Abdul Samad for the recommendation; made his IPL debut; played for India A and then was drafted in as a net bowler for India’s T20 World Cup campaign. So many breaks, and so fast.

Fast bowling is a demanding task, a fast bowler’s career is uncertain. The threat of injury looms all the time. The batters run when they want to, the fielders run when they need to but a bowler has to run to do the job. To train the body to do the same again and again is not easy.

Think of the effort that goes in.

How Umran generates such pace? Let’s understand the biomechanics.

Umran runs in to bowl keeping arms close to the sides, a bit low and relaxed. The big leap enables his upper body to turn side-on, meanwhile the hip rotates towards the batter. Then the rear-foot landing, snapping of the wrist, rotation of the arm, all this with a braced front leg or locked front leg.

This is the key. Imagine the front foot landing with a bent knee, it puts lots of pressure on the back and increases risk of injuries. While the braced one provides the advantage of a high release point and does not break the momentum. Thus resulting in generating the energy and the pace. Next moment, his hip and shoulder separate from one another during follow-through. The ball, before one winks, is being passed by the wicketkeeper to his teammates. He is again at his starting point. To repeat the same.

“Take a single and go to the non-striker’s end,” is what Sunil Gavaskar advises to tackle the Jammu Express. He has so far bagged 15 wickets in this IPL, which includes a five-fer against the Gujarat Titans.

Umran looks well armed with a toe-crushing yorker, a deadly bouncer, and looks to add other variations to his repertoire. This season he has stunned one and all with his speed. He is still in his early 20s. He has just started. And has a lot to offer.

“Umran will play international cricket, no doubt about that. He bowls at 150kmph consistently, and nobody else is doing that in the world right now…from an Indian point of view, he is the only guy that consistently bowls over 145-150 kmph every single ball, so he will play for India,” Steyn said, speaking to the Sportstar.

Hope Steyn’s words come true sooner. Umran bowling for India and in tandem with Jasprit Bumrah, Mohammed Shami, Umesh Yadav and Mohammad Siraj will be a sight to behold.

If others bowl fast, Umran bowls faster, and there is no reason why, if he is groomed well, he may well become, the fastest. Whoosh! 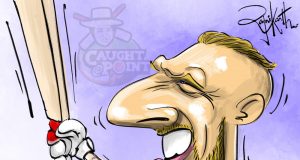 How Ben Stokes England Like No Other Player Has And Very...

Dev Tyagi - June 4, 2021
0
One of the great misnomers about Cricket is that glories are only restricted to runs scored, wickets clinched, catches taken and demonstration of excellent...