The One-day series between The Netherlands and West Indies will give an opportunity to both teams to try out new players given both sides are suffering from the absence of some of their first-choice players!

The scrapping of the World Cricket League, which featured ODI contests, such a key for the future of teams like the Netherlands came in as a shocker. It, quite simply, sent teams like the Dutch back to pre-2019 era, a time where teams struggled to get continuous games.

The said league, which just survived for no more than four years saw The Netherlands becoming the first and probably, the last (until it is revived in future again, the chances of which seems very slim) member beyond the Test Nations to get regular games against the-top 12 Test nations.

After all, it is only because of the WCL that they were able to play with South Africa, New Zealand and Afghanistan in the recent times. But today’s a new day. A fresh start. Chance to make a new beginning.

Which is why it makes sense to suggest the series against the West Indies will give the Dutch a chance to move forwards in the white-ball game.

And while the three-match ODI series is a much-anticipated one for the Dutch fans, the timings have clashed with the County and IPL games, a reason why some of the regular names will be missing from both sides.

Though, what must be said is that both teams have hit a rough patch where their 50-over form is concerned. The West Indies lost the last of their two series’, one each against India by a margin of 3-0 and then versus Ireland, by a margin of 2-1.

The latter being aptly described as a dark day in the history of West Indies cricket where a side significantly inexperienced and weak in comparison to the Caribbean outfit managed to upset a historic powerhouse of the game.

On the other hand, things haven’t been too bright for the Dutch, who lost their last series in New Zealand being thrashed 3-0. Earlier in January, Afghanistan ran over them in the UAE.

However, the hosts will be confident and perhaps abundandtly so given they play the West Indies in home conditions.

Withoout a doubt, the Netherlands side would like to repeat what Ireland did to the West Indies few months ago.

But where the visitors are concerned, theirs is also a chance to regroup. After all, they are to embrace what may be called a new dawn in Caribbean white-ball cricket.

The West Indies led by young Nicholas Pooran would like to embark on their goal to revive their topsy turvy 50 over fortunes and ensure that they give some serious fight to the contenders of the 2023 World Cup.

A side composed of several names that are still new to the ODI format now have a great chance to make giant strides forwards.

Think of Kyle Mayers and Nkrumah Bonner, established Test names that have among them an ODI experience of only 6 games.

Players like Rovman Powell who have excelled in T20 Cricket and played not a tremendous deal in ODIs will now need to step up in the 50-over contests.

We would like to see not just the flat hits and the powerfully timed strokes, but the sight that so often eschews a typical West Indian inning:converting the 1s into 2s and avoiding gobbling up too many dot balls.

At the same time, the likes of Akeal Hossain and Romario Shepherd will need to ensure that West indies take their bowling a notch ahead. Their talent is never under doubt, but now is the time to stamp some impression on the game.

The Windies anyways have some tough assignments later this year in Australia (World Cup, ODI Series and Test Series), where they need to ensure that they put enough stomach to fight.

That the preparation for tougher contests that are to follow begins now is interesting since the Windies are up against a side eager to prove itself against the big boys of the International Cricket.

On the other hand, Pieter Seelaar’s team would be eager to get some great interntional experinece against a top Test country. It will also help them to get into rhythm for the long summer where they will be facing England, Pakistan, and New Zealand. The series against West Indies thus will offer them a hint as to who might their best players for the World Cup 2023.

With the retirement of Stephan Myburgh, the batting responsibility mainly lies on the troika of Scott Edwards, Bas de Leede, and even captain, Seelaar. Meanwhile, someone like an Aryan Dutt, who showed glimpses of his talent against New Zealand, needs to show he is a long term prospect.

Overall, the series will be an interesting one to watch even as most of us IPL-obsessed, T20-loving fans habitual of only enjoying an India, Australia or England play consider the rest in the sport as lesser mortals or something like it.

Here’s a reason why.

Considering the West Indies are no more a powerhouse in ODI cricket and are, as per normal, missing some major names, they’ll have a chance to rebuild the youth now holding much of that responsibility. The Netherlands, on the other hand, would like to take advantage of this situation and create history, which will only further boost the thriving culture of cricket in the Max Verstappen country! 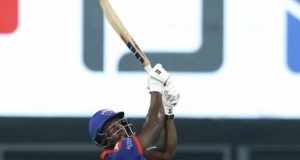 Dev Tyagi - May 1, 2022
0
So often a victim to batting vulnerabilities and when not, then a habitual prey to a lack of application, the West Indies...