After a 3-0 win against the Netherlands just mere days before, the 3-match series against Pakistan was always going to present a much sterner test. West Indies were subsequently defeated in the series, and perhaps more significantly, left Pakistan with zero Super League points, putting automatic World Cup qualification in jeopardy.

However, the series did provide some useful takeaways that must be taken into consideration whether by the fan or critic of Caribbean cricket:

The best white ball teams in the world have wicket takers with the new ball, who also perform well at the death. Players such as Shaheen Shah Afridi, Mitchell Starc, Jasprit Bumrah, Kagiso Rabada, just to name a few, are a primary reason why their respective sides perform so well in limited overs cricket. This is an area West Indies is lacking in, and has been lacking in for quite some time. Though Alzarri Joseph had a decent series with the ball (4 wickets in 2 games at an economy of 4.85), none of this inexperienced pace bowling counterparts provided the necessary support or pressure at the other end, and hence Pakistan, specifically Imam ul-Haq and Babar Azam, were always able to get their team off to good starts. While Akeal Hosein continues to develop into one of West Indies’ best bowlers (and budding allrounders) and provided the necessary pressure in the middle overs (5 wickets in the 3 games at an economy of 4.83) to halt Pakistan’s acceleration, the good work by both him and Joseph was often undone at the other end, especially at the death. Pakistan scored at 8.6, 6.7 and 8.3 runs per over at the back end of the innings in each of the ODIs. In the second ODI where they scored at 6.7 runs per over, the last two overs were especially costly on a slow turning wicket, going for 27 crucial runs.

The most glaring statistic that exposes the bowling woes of the Windies was the fact that captain Nicholas Pooran with his little known off spin took the 2nd most wickets (tied with Joseph) for the West Indies across the three-match series. This stat makes the bowling look even worse, considering all four of these wickets came in the 3rd ODI.

Once must acknowledge that the West Indies were fielding a very inexperienced bowling attack, especially in the pace department, with frontline seamers Anderson Phillip and Jayden Seales relatively new to ODI cricket. The bowling department also lacked the experienced Jason Holder, who was duly rested for this series. However, the lack of  new ball wicket takers and death bowlers is something that has plagued the West Indies side for far too long and is an issue that needs to be addressed ahead of next year’s 50 over World Cup.

West Indies’ continued struggles against spin are well documented and was one of the reasons even the most optimistic of fans predicted nothing less than a 3-0 score line when this tour was announced. However, the issues against spin are further compounded by the lack of form of the middle order batsmen.

Brandon King, who had an excellent series against Netherlands, struggled against the much better Pakistan attack and could only muster 4 runs across two innings. Rovman Powell, who was unable to play in the Netherlands series due to Visa issues, only mustered 52 runs across the three games, 32 of which came in West indies’ best batting effort in the first ODI. However, most concerning is the form of captain Nicholas Pooran. Pooran, who batted at #4 and #5 in the series, only managed 52 runs from 3 innings, extending his wretched ODI form in 2022 (158 runs from 12 games, averaging 13). This is not good enough. The ever-dependable Shai Hope didn’t have the greatest start to the year in ODIs either, but hundreds in both series against the Netherlands and Pakistan proved that form is temporary and class is permanent, and the same will eventually ring true with Pooran. However, it needs to happen sooner rather than later. It is acknowledged that the added burden of captaincy could make it more difficult for him with the bat, but this West Indies side doesn’t need Pooran the captain who bats, they need Pooran the batter who captains.

The top order looks relatively solid with Shai Hope’s return to form, Shamarh Brooks’ classiness, and flashes of brilliance from Kyle Mayers who showed signs that he could be a good foil for Shai Hope at the top of the order, if Evin Lewis continues to be absent from the side. Young Keacy Carty played admirably in his two international knocks thus far, and seems to be one West Indies can persist with, but the more experienced Pooran and Powell need to step up if West indies are to consistently post challenging totals.

West Indies must raise their standard of fielding

Poor fielding continues to plague the West Indies side and can be detrimental to efforts to win games. There were two very glaring blunders in the first game that had a decisive impact on the match. On the second ball of the penultimate over, Romario Shepherd bowled a good ball to the in-form Khushdil Shah, but, an untimely fumble from the bowler resulted in the batter getting two runs, where he should have only gotten one. Subsequently Khushdil smashed the next ball for 4. Two balls later, Khushdil was afforded a second run that wasn’t there, this time from the usually dependable Hayden Walsh Jr.. As with the third ball of the over Khushdil deposited the next ball for a boundary, this time for a 6. Those two poor fielding efforts cost the West Indies 12 runs in that very crucial over, and all but secured Pakistan’s victory.

While there were other fielding lapses, these two specifically highlight the importance of good fielding to a game’s outcome. Romario Shepherd was in the midst of a poor spell of bowling, but had the fielding in his final over been better, West Indies might have still won that match. West Indies need to raise their standards in the field in order to be competitive with the best sides in the world.

While the West Indies still occupy a place in the top 8 of the ODI Super League table (the first 8 teams gain automatic qualification to the 2023 World Cup), this a precarious position, given the team has played more games than any of the other sides. For example, West Indies, who sit 5th, have played 15 more games than New Zealand, and 8 more games than South Africa, who sit 10th and 11th respectively. Thus, it is more than likely that West Indies will have to play the World Cup Qualifiers in order to qualify for the main tournament. Regardless of qualification the easy or hard way, West Indies must improve their fielding and get more out of their captain and the other middle order batters. However, the most pressing issue is the lack of potency in the bowling attack. West Indies fans should expect growing pains in this new era as the team seeks to rebuild (again) and though there are a few positives to reflect on, those negative aspects of the game need to be addressed if the team expects to feature at the 2023 World Cup. 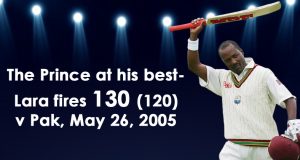 Dev Tyagi - May 26, 2021
0
There's no cricket like Test cricket. Not an outdated saying; something that'll hold true for as long as the great game bats on. And...